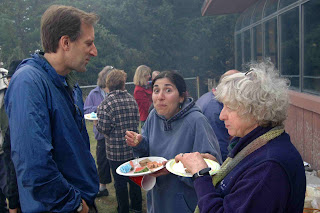 We planned our bon voyage party months ago, and it was always far in the future in that never-never land where we would be on the cusp of sailing away from Kodiak on our boat, the most improbable thing you could imagine. And then suddenly last Saturday the day was here, friends were arriving first in a trickle and then all at once, and we were having a grand time and then it was over way too fast. Our apologies to those who showed up at Ft. Abercrombie. Our bad. Anyway, we had a beautiful day for it, which is no small thing given the run of incredibly foul weather that Kodiak is giving us as a farewell treat. The whole thing was bittersweet for both of us.

With that milestone behind us, we know our sail-away day will be here soon soon. In other milestone news, A. officially quit her job on Friday. She is the most responsible person I know, and when my race is run I'll be able to look back and say that if nothing else, I was able to talk her into quitting her permanent federal job and running away to sea with her husband and little boy, against all reason.

I've got quite a few ideas about the grand gesture, and its shrinking role in the fourth decade of a person's life, and the really important role that grand, even poetic, gestures can still play in our lives if we just let them. But writing about that, inshallah, will have to come later. Now we just need to get our asses off the Rock. 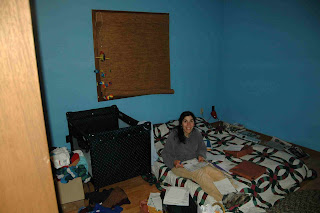 A. in organizing mode: "Which of these papers will we need for taxes next year?" Note the lack of furniture and decor. Still way too much stuff in this picture to go onto the boat, though. 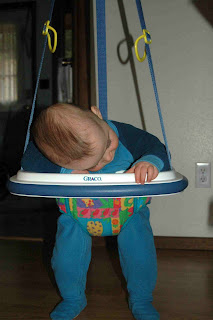 Eli, meanwhile, remains unimpressed by all the fuss. 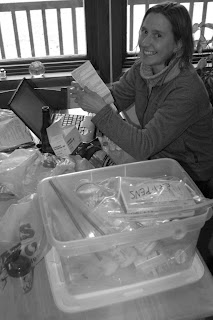 The top picture is my sister Jenny organizing our medical kit, the bottom picture is the banana that stood in as the patient for the lesson that Jenny gave A. and me on skin staples and suturing.

I have an aversion to talking about luck afloat, but I do think that adventures like ours provide plenty of opportunity to make your own luck. In a setting like the Iditarod, where everyone is exposed to the same universe of potentially bad-luck sources like weather, trail conditions and the odd moose, it’s the experienced mushers who tend to come out at the other end with fewer hard-luck tales. They’ve made their own luck by preparing hard and having been around long enough to have built a catalog of past mistakes.

So lots of what we’re doing now I think of as building (hopefully) our own luck. The rest is just an endless list of jobs. But it’s all coming together. Alisa is almost done with work, and I’ve just got two more frantic weeks of getting research published. We’re both going to stay home next week and pack up everything in the house. Alisa has three months of provisions on board and we’ve got the main and staysail bent on. We’ve had Eli on board one day at the dock as we were getting things together, and in the midst of all the screaming we learned something about his preferences on the boat. Our idea of having him sleep in the salon didn’t work – too much activity for him to take a nap there. So we’re kissing our double bunk forward goodbye and fitting it out w 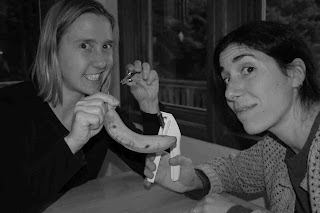