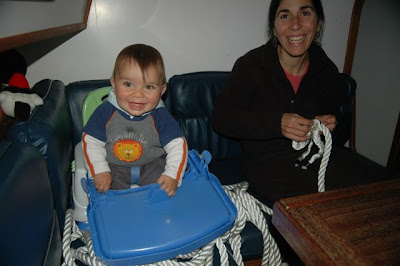 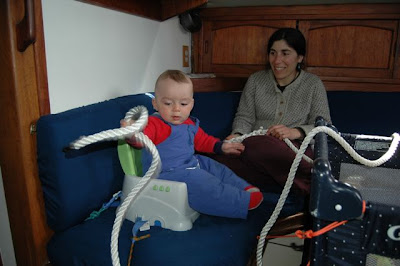 I don't actually think that we'll have too many moments of déjà vu in our upcoming trip to Australia - just as you can't step into the same river twice, I'm sure that you can't sail across the same ocean twice.  I expect that our experience this time around will be something quite different from what we found on Pelagic in 2008.

But today we did have a been-here-before moment - Alisa was splicing a line while Eric sat in his eating chair, (top photo) and we both simultaneously remembered a very similar moment - same chair, even - with Elias back in 2007, a week or so after we left Kodiak (bottom photo).  Funny how the photograph becomes the memory.  If we didn't have the photo of Elias and the anchor line, we never would have remembered that particular moment aboard Pelagic.

Meanwhile, it's after midnight and Alisa is off the boat, sewing our new deck awning for those tropical anchorages ahead.  She was sewing until 0230 last night, and Eric took her absence as an invitation to have a uniquely bad night, screaming and hollering and keeping me up.  So today was a bit of a washout for both Alisa and myself, as the combination of built-up fatigue from weeks of work, too little sleep, and too-hectic kids kept us from doing much meaningful work.

Eric, by the way, has lately developed an incredibly piercing, high-pitched scream that he rehearses for us through much of the day.  Not a good sound to be sharing a boat with, even as big a boat as Galactic.  I've been re-reading some of my descriptions of sailing with Elias at a similar age, and that has reminded me how tough it can be to share a boat with the under-one set...

Overall, though, things are great.  Alisa and I remind ourselves that this preparation stage is challenging enough that many, or even most, aspiring long-distance sailors never get past it.  So we're putting out heads down, working as hard as we can, keeping smiles on our faces, and consoling ourselves with the conviction that days of languid passagemaking are not far off. 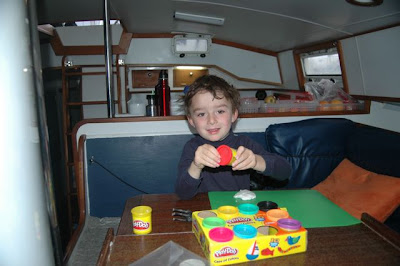 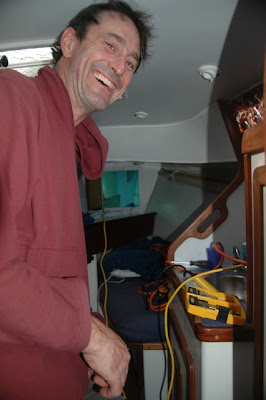 Email ThisBlogThis!Share to TwitterShare to FacebookShare to Pinterest
Labels: preparations, the big picture