We had the great pleasure of a visit from Chris Gill last week, the bloke who is going to marry my sister in June. He had a business trip to Melbourne, then added a couple days in Iluka to his itinerary. We've had vistors twice before Chris came, and both times the weather was horrible. Luckily, Chris beat the odds and we were able to show him Iluka in its glory. The first night we went out to Woody Heads for a barbecue. Could you beat this scene for a family visit? 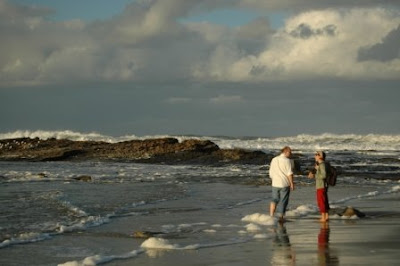 I like this next picture because Chris looks so happy to be visiting, and because it's the only picture that I have of Alisa holding a beer. 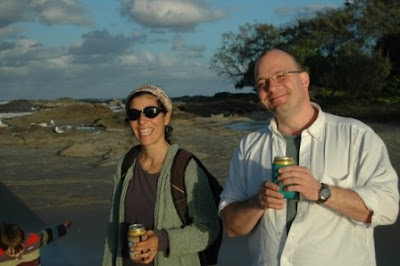 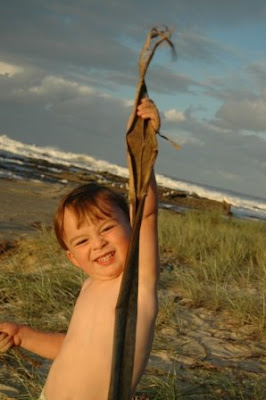 We took Chris and Andrew, the brother of a friend of ours who rang us up at exactly the right time, out for a sail on the Clarence River. It was a great sunset cruise, and a good chance for us to make sure everything looked good before we set off for the trip north along the coast. 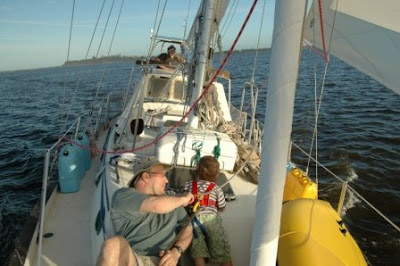 Chris stayed on the boat with us, and did great with the enforced intimacy that involves. He hit it off really well with Little Salty. Perhaps the highlight of the trip for me was to waking in the morning and hearing Chris and Elias talking quietly across the saloon from their bunks, instead of starting the day at 0555 with Elias shouting to Alisa and me that he is all done sleeping, which is the normal course of things.
I like this next picture mostly for the depth of field. 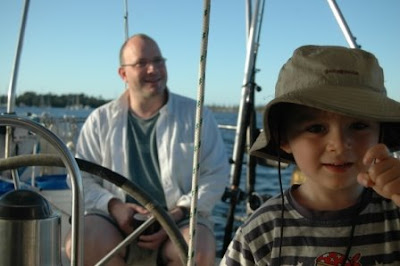 We were truly sorry to see Chris leave, which is the best complement that any guest can get. Jenny, we approve!
~~~
We are now counting down the final days until our departure northwards. So much is coming together - we have new house batteries for the boat, two of our anchors are freshly galvanized, Alisa has serviced some winches that have given us their all over the last year and a half, we have moved a pile of junk that we never use to the house of friends, where we will pick it up in the spring (thanks guys!), the forward rail re-seal job is nearing completion, the pesky deck leak that had me baffled for years has finally been tracked to a dorade and fixed, routine engine maintenance is nearly done, etc. etc. And, well, we're really excited to go sailing again. I'm even really excited for the next month of just traveling up the coast - "Imagine!" I say to Alisa. "A whole month of just sailing!"

Over Easter weekend we picked up the hook and took a cruise up the mighty Clarence River. Here's a shot of the lower Clarence as seen from the east. 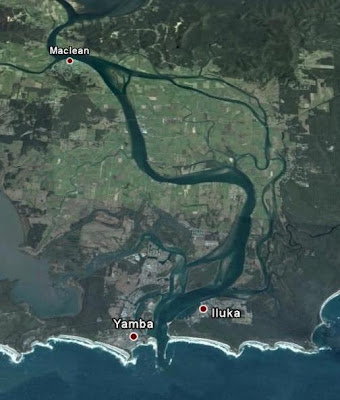 The Clarence River is navigable for forty miles by sailboats. We just went 14 miles or so, a little past Maclean, the little burg that advertises itself as "the Scottish town in Australia", even though our Scottish friend Catriona says that she still has to repeat herself to be understood there. While we were anchored off Maclean there was all kinds of bagpipe music being played in observance of Easter. And, just because I was on Google Earth, here's a shot of where Iluka is (the red anchor) if anyone out there is still wondering. 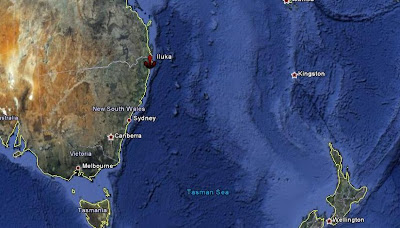 Looking at this image, I noticed that I centered it on the Tasman Sea, rather than Australia. So you can see where my perspective lies these days. 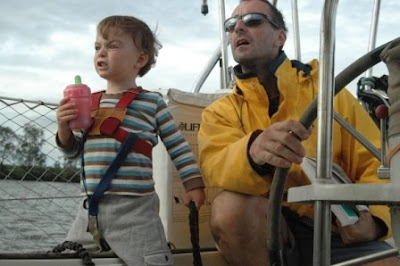 Little Salty gave me all kinds of help with the tricky river navigation. In spite of that help, we went aground twice during our first day on the river. The first time we went aground softly, on a mud bank, and it took us a half hour of rapid effort in the face of a dropping tide to free ourselves. The second time we went aground very hard, against a rock. That time we just bounced off, and were free immediately. Twice aground in one day, after going aground exactly once before that during the five years we've owned the boat!
Alisa was below with Elias when we hit the rock, and the shock of the three-knot impact (much faster than it sounds) made her feel ill. "What are we doing in this river?" she said to me. "We should be offshore."
She also regularly says things like, "We don't need a bigger boat."

Cruising dudes of the world, eat your hearts out. 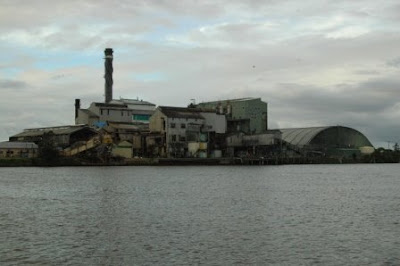 On the way up river we passed the Harwood sugar mill. 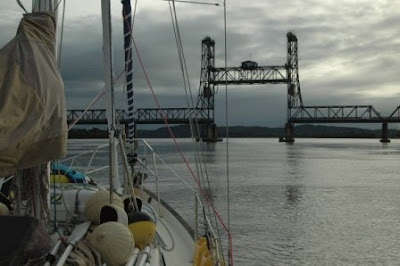 And we went under the Harwood Bridge. You can see the center of the bridge lifted up for us in this shot. The main north-south highway in Australia runs over the bridge, and it felt a bit funny for the highway to be shut down just because we wanted to go up the river for no good reason at all. But that's how it works - you ring up the bridge operator a day in advance, then he makes the hour-long drive from his house to be at the bridge at the appointed time and stops the traffic to let you though. Too easy. 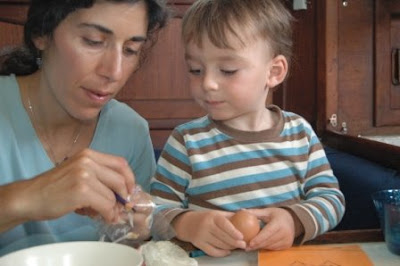 While we were anchored off Maclean, Alisa and Elias decorated Easter eggs. 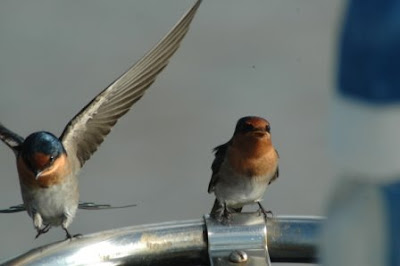 And welcome swallows landed on the bow pulpit. They were welcome, of course, but that's also the species name, "welcome swallow". 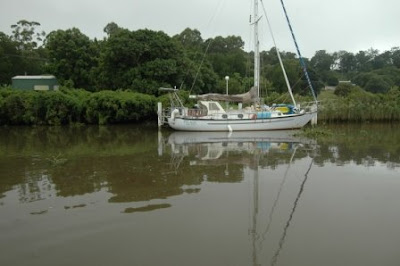 Then we went up the river and dropped in on Gary and Sue, friends of friends of ours. Gary and Sue have been cruising since 1983, though they've taken the last 8 years off. Inside the green shed to the left in this shot is an exquisite 45 foot foam-core fiberglass sailboat that Gary is building. Gary and Sue are planning on setting sail this September for a two-year sail to Alaska and back with their two sons. After all the half-assed owner-built boats that I've seen, it was really inspirational to see Gary's project, and to see pictures of the last boat that Gary and Sue built. They're big, light, strong, fast boats, done to standards one step above the professional. Incredible to see how much they're able to get done - in the eight years they've been in this spot, Gary has built the house, built the shed, gotten his own boat to the point it's only a couple weeks from launching, and completed two projects for other people - finishing a 40-foot sailboat from a bare hull, and doing a complete refit on another boat. Plus he's totally relaxed to be around... I am not worthy.

So now we're back in Iluka, enjoying our "regular" life. One of the things we like to do is go out to the main beach at the end of the day for a little yoga. 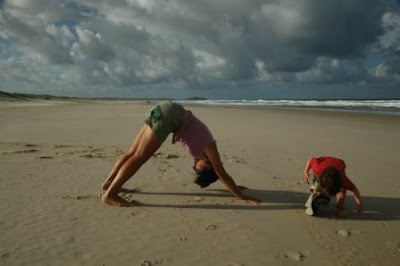 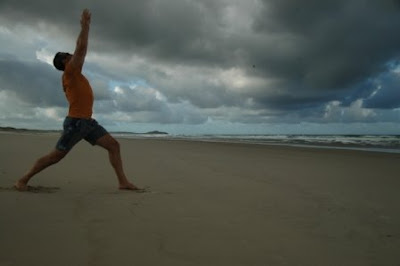 Elias is generally thriving. Really, you are depriving your children if you're not raising them on a sailboat. 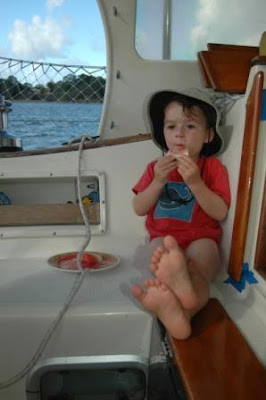 And this was me last night, getting after our old nemesis, the leaking caprail. We've been doing lots of work on the boat, and she's feeling ready. Only a couple weeks until we go sailing! 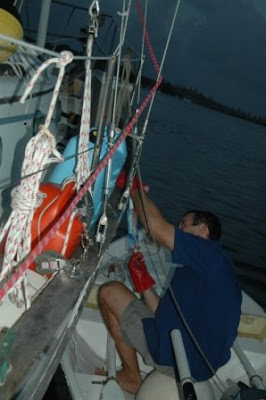 Well, on one hand I hate to pander to my audience. On the other hand, you'd be a fool not to use the material that you've got...

Judge for yourself; here's Elias telling us about sharks the other night.

"What did the guy say at the shop?" asked Alisa.

"Well, not in so many words. But he said he thought it would be right. And I put it on the boat and it's putting along fine."

"A hundred and thirty dollars. That's about ninety U.S. Even the lessons are one third off in this country!"
Posted by MikeAlisaEliasEric No comments: