Just a note to say that we have absolutely landed on our feet in Hawai'i.

The Mothership is in a transient slip that is operated by the State of Hawai'i and costs us all of $8 USD a day. Granted that we had to bring our own yacht, but aside from that I can't imagine a better deal for a waterfront holiday home in Hawai'i.

There is a little beach on one side of the marina, and a bigger beach on the other side, liberally sprinkled with basking green turtles, that is a part of a National Historical Park.

We have had a series of great interactions with very friendly locals - people coming down to the boat with produce from their gardens, or offering us rides, or just to chat.

It's been a great place to make our first tentative dip into the home country.

Now if we could only figure out that pesky detail of foreign interference in our elections... 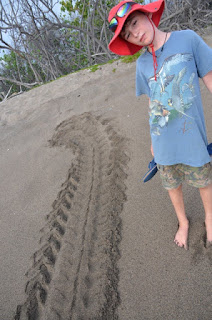 All Done But One

We arrived at Honokohau, Hawai'i, two days ago. One of the two transient berths was blessedly vacant, which gives us a guaranteed place to moor the barky during our entire stay in these islands, that, as blessed as they may be in other regards, are cursed in terms of decent harbors.

And, no small thing, after all those miles of open open ocean travel (our GPS showed 4,919 from Panama City), the close maneuvering to come to rest, Tahiti moored and snuggled next to the other transient yacht in the harbor, went completely smoothly.

We have cleared Customs, which was an astonishingly easy process. A local ex-sailor and ham who gave us extensive help in figuring out the logistics of our stay while we were still on passage has met us at the dock and very very very kindly spent an afternoon driving us around to grocery store and various internet providers. (Thanks, Drifter!)

And, courtesy of the good people on the Pacific Seafarer's Net who clued us in to the fact that lava is currently flowing into the sea on the south coast of the Big Island, we had the most spectacular landfall imaginable. We detoured to the lava entry point and were greeted by the sight of the massive steam plume as we closed the island at dusk, and then the even more impressive violence of Pele's/Vulcan's river of molten rock flowing down the mountain slope, clearly visible from sea after dark, and the incredible fiery violence of the lava cascading into the ocean, just off our starboard beam.

Now that's the way to arrive in Polynesia.

Alisa was very keen to make landfall at that spot, as any rational person would be. I, on the other hand, was concerned about the implications for our chances of making the harbor in daylight the following day. We made it fine, of course, and I got a valuable lesson, all these years in, of the value of making detours.

For, after all, what is this sailing life of ours, if not a decade-long detour?

We've made our initial accommodation with land life, US-style, in the form of a long afternoon (thanks, Drifter!) spent in the AT&T and Verizon shops, trying to come to terms with the rapacious entities that plug us all in to the post-fact world.

When Elias complained about how long it was all taking, Alisa and I were notably unsympathetic. "Welcome to land life," we told him. "It's only going to get worse from here."

Is that the correct message to convey?

And, in the grocery store, I had my own moment of homecoming. There in the cooler were long racks of American beer. We had finally, after all our wanderings, arrived at a port where I could just walk into a store and buy a 12-pack of Lagunitas IPA.

Which I did, of course. But not after taking a moment to go misty-eyed, standing there in the refrigerated beer aisle, considering this physical manifestation, right there before me, of just how good the world can be.

So that's us. Back in the USA.

The last time we spotted another vessel on this passage was about two weeks ago. That was a tuna seiner, 40 days at sea, who kindly came up on the VHF to ask if we needed anything.

We didn't note the event in the log, so I'm not sure exactly how long ago that was. But in the two weeks or so since, Alisa and I have faithfully kept watch around the clock, with regular short-term assistance from the boys during daylight hours.

That watchkeeping has taken its toll. We have passed much of the trip in an addled, sleep-deprived state. We might have reasonably turned on the radar alarm and the AIS alarm and both o fus gone to sleep at some point, content in the safety of those two electronic eyes and the extremely low chances of crossing paths with anything. But though we've done that in the past, Alisa and I now like to keep watch even in the loneliest stretches of the ocean, for reasons that we can't fully articulate.

Our sleep-deprived state gives a funny cast to the vast amounts of spare time that we have available to us on this month-long sail. We have plenty of time during which we might "do" something, but not the mental powers to concentrate to good effect. The fractured sleep schedules and endlessly distracting motion of the sea see to that. So, will we or no, we tend towards the blissed-out, doped-out, Moitissie-ed-out state of just being.

That blissed out state doesn't make for an any more active existence. Whatever reservoir of self discipline I may have access to does not cover willful physical exercise at sea. I have sat on this trip enough that I want to sit no more in life. That and ritual snacking on my first watch of the night feel to have set my health index back a few notches over the last four weeks/4,000+ miles. Elias has been growing a little paunch before my eyes. I am filled with resolve for the active life when my feet once again encounter the earth.

Our concerns have been filled a bit with the logistical concerns of our impending stay in Hawai'i. Where to come to land, where to leave the barky when we venture back to the mainland for family events, whether we can haul out; the when where who and how of the fixes that we will need to make before setting off for Kodiak.

That buzz of practical concerns is always on a sailor's mind, I suppose, especially when a fairly brief interlude between long passages is planned. But for all that we have bought ourselves a tremendous amount of mental space on this passage, whether we always want it or no. To have "unplugged" ourselves from the noise and dross of the connected, post-Enlightenment, post-fact world, for four whole weeks! The magnitude of this gift will become clear to us once we reach land, and all this time on the endless blue fades suddenly to a dream.

We are less than 90 miles from the Big Island, and have hopes of spying its 4000 m of relief before the day is far gone.
~~
This post was sent via our high-frequency radio as we're far from internet range. Pictures to follow when we reach internet again. We can't respond to comments for now, though we do see them all!

Two days out of Honokohau, we find ourselves effortlessly in just the right position.

Two highs are squashed together to the north of Hawai'i, with the front between the two angling down to the south and promising unsettled weather ahead of us. But we're in the clear air just behind the front, enjoying tradewind sailing, and look to arrive at Hawai'i after the inclement weather has left the islands.

Any number of our landfalls over the years have seen me doing the maths on the speed that we need to maintain over the final couple of days to avoid arriving in the middle of the night, and then tweaking the sails fruitlessly as we fail to maintain that speed.

On this well-earned landfall the opposite situation seems to hold. We have been effortlessly making between 7 and 8 knots, well above the average needed to get us to harbor in daylight hours in two days' time. (Everything going to plan!)

We are so happy with our pace that we are even detouring to the southeastern coast of Hawai'i to chase up a rumor of lava flowing to the sea that might be viewable from sea.

Yesterday was Eric's 7th birthday, a much-anticipated event, I can assure you. Alisa brought her festivity-making magic to bear, with special meals and a Minecraft-themed cake. His delight at the day was complete, his youth and innocence still adequate to the simple pleasure of, for instance, waking up in the morning to find the area under the dodger already decorated for his big day. His eyes were shining with joy all day long, and he assured us at bedtime that it was his favorite birthday ever.

The books and other gifts that he received have made a pleasant set of new diversions just as we are passing the one month at sea mark, and all the old books and toys are prone to going a bit flat. And the day of celebration was a welcome change for all of us, now that the days all seem so alike.

Tomorrow is Alisa's birthday, these days coming in twos for the Galactics. We blokes have promised her a day free of galley duty, and I have been regaling her with descriptions of the canned hot dog curry over ramen noodles that we will produce, among other gastronomic delights.

I trust that she, too, will be happy to have a birthday at sea.
~~
This post was sent via our high-frequency radio as we're far from internet range. Pictures to follow when we reach internet again. We can't respond to comments for now, though we do see them all!