Excitement for the inaugural was high aboard Pelagic. We talked about renting a motel room to watch the ceremony on TV, but ended up watching on the Times website. Woke up at 3:15 am to catch it live from the boat, which is still anchored in Iluka. Quality was very good, the connection only crashed a handful of times. Elias woke up after the oath of office and I missed watching Obama's speech because I was getting the little fellow back to sleep. 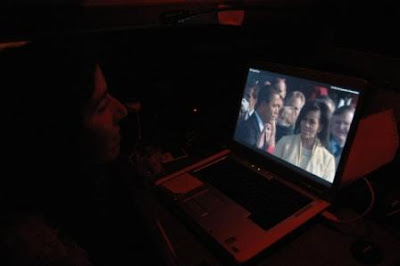 Interesting how election night was so much more electric, how there was a sense of lightning caught in a bottle that night that was missing from the more anticipated ritual of inauguration.

I'll let others plow the ground of how Obama has arrived in office at such an opportune moment, and how, at least for now, we can see a new picture of American discourse, free from the poison of Rovian cynicism.

For now, I'll just ask, re. Roberts' swearing-in gaffe: is he still miffed because Barack voted against his confirmation?
Posted by MikeAlisaEliasEric 1 comment: 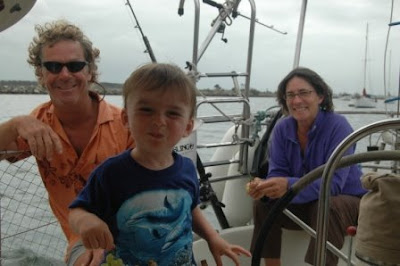 Had our friends Dave and Julia, from the boat Macy, on board Pelagic for a few days' visit last week. They sailed to New Zealand for the cyclone season, but were in Oz to visit her uncle for Christmas. We met these guys in Nuku Hiva, when I rowed over to say hello at an anchorage we shared. I've rowed over to say hi to a lot of different boats, and this was the best outcome yet - they've become good friends. Good for Elias to see them again, too - there was a time, somewhere between French Polynesia and Tonga, when he used to pretend to call Macy on the radio every day.
We got out the sailing rig for the dinghy and held time trials around a set course. Dave and Julia are both one-design racers, and they had the poor grace to clean our clocks. We noticed the difference in posture between us and them when we looked at our pictures of the event - notice how Alisa is just sitting on the seat, while Dave and Julia are crouching or kneeling in the center of the boat, optimizing the dinger's balance. 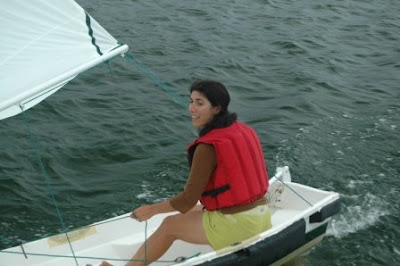 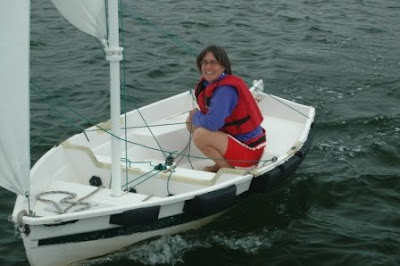 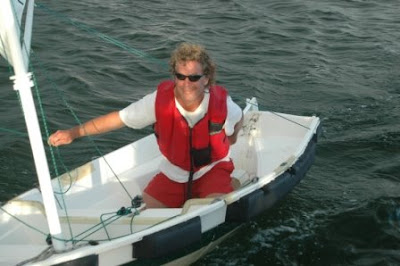 ***
Meanwhile, we've been discovering Iluka, piece by piece, and settling into a travel-free life here. We've been doing yoga on the beach at the end of the day, and going for long walks in the rainforest, and generally becoming more and more impressed with this place. Alisa has swimming lessons lined out for Elias, and we're waiting for the weekly story hour at the library to resume in February - the sorts of things we were looking forward to when we imagined finding some nice place to take a break from traveling for a few months...

End of the Noughties

At the start of this decade, I wondered what we would call it. We had a nice thing going in the twentieth century. The "fifties", the "sixties", the "seventies", etc., etc. Progressive and orderly. But then we hit 2000, and where were we? The year zero? Would the following decade be the "oughts", as in "ought-two, ought-three"? If we were going to follow this logic, why not use "nought" instead of "ought" and just call the decade the "noughties"?

And now, seemingly overnight, we're in the last of this string of zero years. Soon we'll settle on some name for this decade, as we'll need a shorthand reference for the past. And the question of what these years might have been called will seem, to Elias, when he reaches his maturity, like so many other questions that occupied his parents, a quaint concern of people long ago.

So, of course Alisa and I looked back on 2008 on New Year's Eve. And of course we were pretty satisfied with the way we spent that year, and very hopeful for the year to come. It is, as I noted on the very first post ever on this blog, much later than any of us think. And the years go by, whether we will them or no. Sailboats move so slowly, and people who travel the world under sail are forced to think in such big chunks of time - this season to cross an ocean, this year to make it across a hemisphere - that plotting out the trips that you might hope to do quickly forces you to contemplate the endgame of living the life you want to live. And so we'll hope, and plan, to continue living that life for this one more year.

For our New Year's Day we went walking in a remnant of coastal rainforest next to Iluka. Along the way we got a neat introduction to the ying and yang of Australian wildlife: super-tough Alisa was brought nearly to tears by the pain of two ant bites (ying), she picked up a paralysis tick (ying, don't even ask why they call it that) and we saw two lifer birds, Eastern Rosella and Rufous Fantail (yang). We followed the coastal route to get home, and had the real pleasure of watching a group of dolphins surfing just off the beach. They were probably common bottlenose dolphins, Tursiops truncatus, although very similar Indo-Pacific bottlenose dolphins, Tursiops aduncus, also occur here. Difficult stuff to photograph, as the action happens so quickly. Check out this series. There's a lot of glare off the water, but you can make out a group of dolphins swimming inside the wave, then peeling off to the left as the wave curls over and breaks: 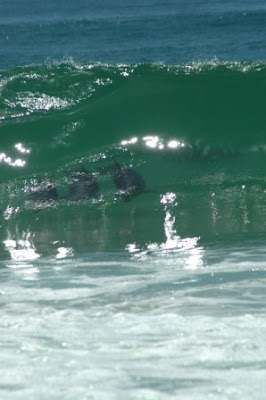 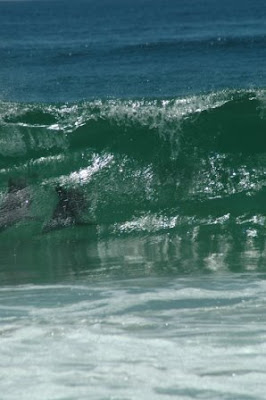 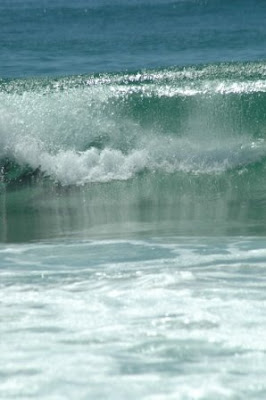 The dolphins sometimes jumped off the back side of the wave they had just been riding. These two jumped one after the other: 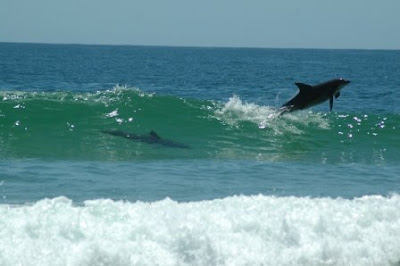 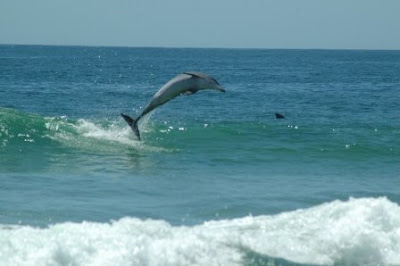 So. Not a bad way to begin our year. 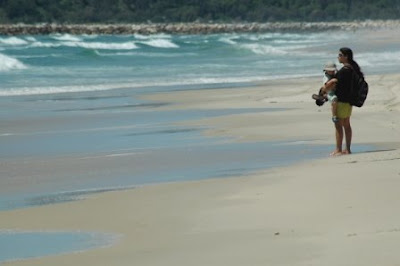