This is from July of last year, early in the trip, when we were sailing up Lynn Canal in Southeast Alaska.

We're back in La Paz after a week in the nearby Sea of Cortez islands with Jamie and Kelly - pictures and stories soon to appear on the blog. Meanwhile, these postings give me the chance to cement my memories of our generally great passage down the outside coast of Baja, the first cruise in foreign waters for the barky since our trip up the outside coast of Vancouver Island four years ago.

We left Asunción at dawn to make the forty-something mile trip down to Punta Abreojos in daylight, followed by three yachts that had anchored up late the previous evening. The wind began at nothing but then built to six or seven knots on our beam. We set the spinnaker and spooled our way along the low brown coastline, the distant square mountains that we had seen from the anchorage slowly getting bigger, and the sea getting more blue.

Just as during the sail down from Bahia Tortugas in company with Free Spirit, the presence of the three other sailboats on the water made it all more exciting, as I gauged our progress against theirs. Two of those boats also broke out their chutes, one of them emblazoned with the Maple Leaf, which may or may not have been on the same boat that had a Maple Leaf painted on their wind vane. There are a lot of Canadian yachts in Baja, and they tend to fly bigger national flags from their backstays than do the Americans. A big Canadian flag says, “We’re not from the U.S.!” while a big American flag says, “We invaded the wrong country, but we’d be happy to do it again!”

The big Canadian flag on the spinnaker behind us inspired us to imagine the dialog on that boat, voiced in an accent that veered between the Plains of Alberta, hose-off, eh? Canadian and the late Soviet.

When we pulled down the spinnaker to gybe: “Ha-ha, we haf that Yankee now!”

When we poled the spinnaker out on the other side and began to pull away from the other boats again: “Darn that Yankee and his Yankee tricks!”

And when the three boats seemed to be heading for Bahia San Roque, an inferior anchorage a few miles north of Abreojos: “Halfway’s good enough for us, eh?”

A few miles out of Abreojos I saw a flying fish. At first my mind resolved it as a murrelet – small shape, taking off from the water. Then the pectoral and pelvic fins fanned out from the cigar-shaped body, and the shape morphed into a flying fish, flying itself away from Pelagic. What a cool moment – along with the sunshine, the blue water and the desert mountains of the coast, the flying fish was a material reminder of the fact that we are in a very different ecosystem from the one we left behind in the Gulf of Alaska.

Abreojos means “open your eyes”, and the chart features a couple of reefs that look like they would be hard to see from the deck of the barky. We found ourselves a nice little anchorage away from the reefs. 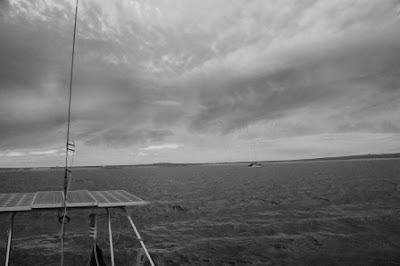 The anchorage in Abreojos.
The next day was New Year’s Eve. Alisa made a great holiday meal – pan-fried canned salmon, holiday rice with cranberries and pine nuts, artichoke hearts, chocolate pudding. The last of the canned salmon, one of the great benefits of being Alaskan, and the last of the pine nuts, one of the great benefits of being Arab. Just as Alisa was putting Elias to sleep, the wind shifted abruptly and sent steep little waves into the anchorage, so much so that Pelagic was pitching up and down and we had to hold on with one hand when walking around the cabin. I forewent my holiday cocktail for fear that we might have to move in the middle of the night. Alisa lay down on one settee to write in her journal, and I lay down on the other to read, and by ten thirty we were both asleep, the first moments of 2008 be damned. Luckily the banging of the anchor chain woke me up at eleven thirty, so I was awake for the local arrival of the new year, though at the stroke of midnight I was hanging head down over the bow pulpit, checking the snubbing line on the anchor chain.

We tried to get ashore in the dinghy the next day, but the surf was too big on the beach for us to land. The next morning we decided on the spur of the moment to go ahead and start the overnight trip to Bahia Magdalena, hoping to make good on a light land breeze in the face of a forecast for dead calm. The wind died two miles off the coast and we motored all that night on flat water.
*** 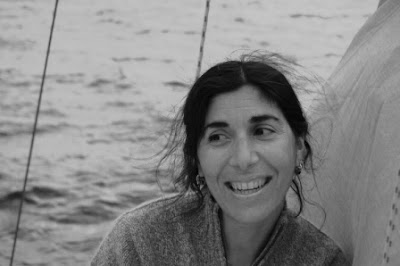 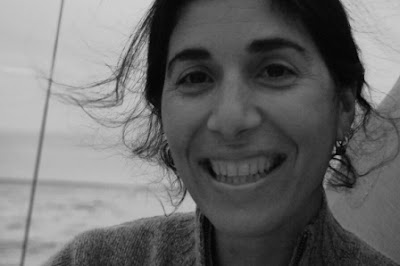