So here's the thing about Port Davey - to get there from Hobart in your boat, you have to stick your nose out on the south coast of Tassie and travel dead west for a day.  Since southern Tasmania is well into the roaring forties, you need a lull in the persistent westerly winds to make the trip.

That's one of the things that makes Port Davey special - it can be tough to get to. 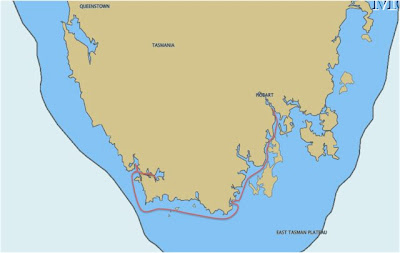 This is our outbound track in red, from Hobart in the east to Port Davey in the southwest. 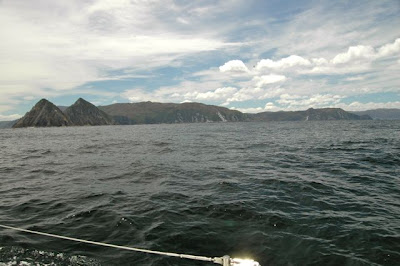 We had a perfect day for the trip out.  This is the somewhat notorious Southwest Cape, looking completely placid, and below, the coast just south of Port Davey. 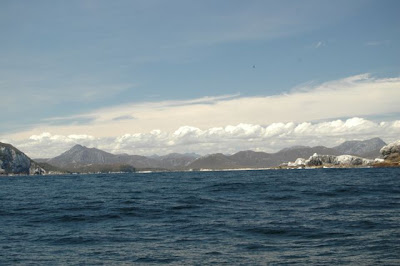 Eric didn't think it was such a great day, though.  There was a little wind on our nose, and a bit of a swell from the west, and he was seasick all day long. 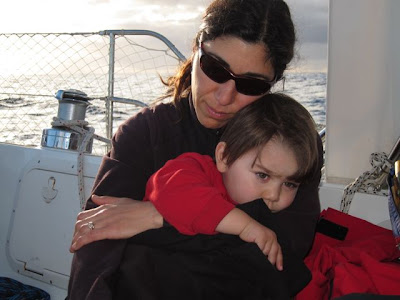 A highlight of Port Davey for us was a visit from Mary-Anne Lea - globe-travelling pinniped biologist, knowledgeable Tasmanian naturalist and great friend to Galactic.  She flew into the airstrip at Melaleuca and spent four days on board. 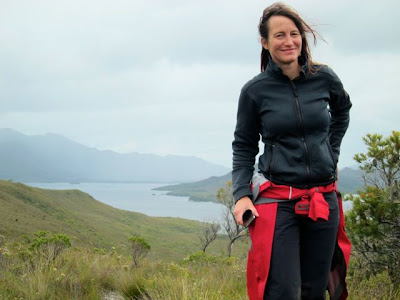 This was a raincheck visit of sorts.  We had invited M-A to visit us in French Polynesia last year, but then, to our lingering shame, rescinded the invite.  Family life with a one-year-old and a five-year-old in the confines of the boat was just a little too crazy for us to want to share it with a friend. 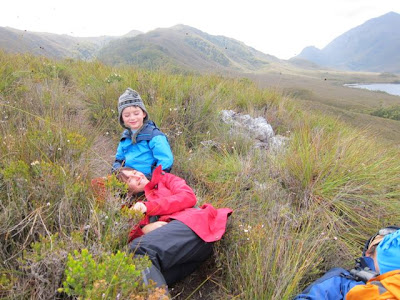 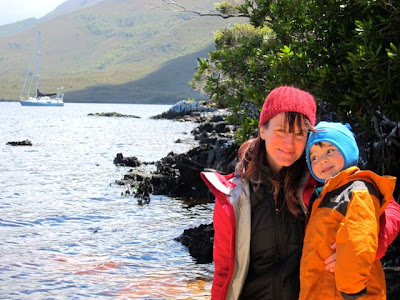 Family life is a little more mellow now, in the two-year-old and six-year-old phase that we currently inhabit, but it's still pretty full on, as the Australians say.  M-A got the full Litzow/Abookire experience - Elias was even cheeky to her. 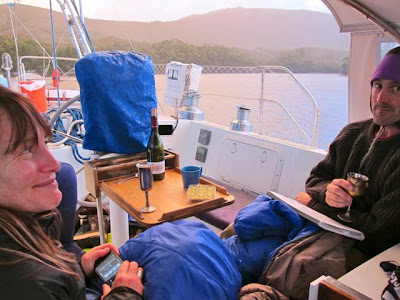 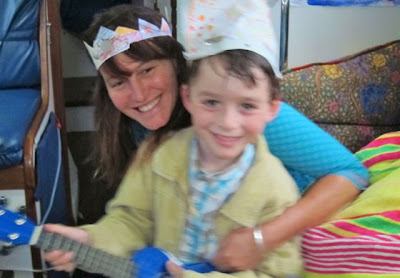 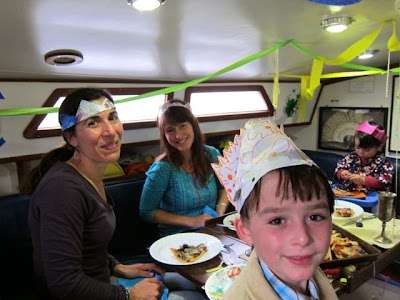 The attractions of Port Davey, for us, were the "b"s - beaches, bushwalks and birds.

The beach part is pretty obvious - the beach is the place to be when you're traveling by boat with kids. 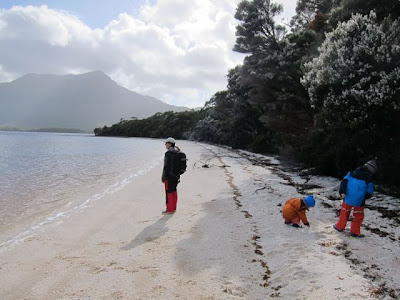 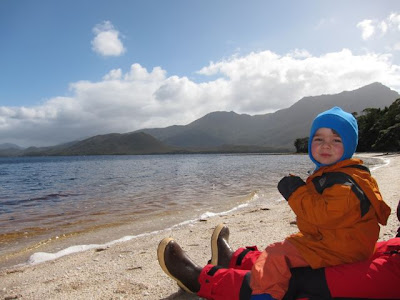 There are a lot of little hidey-hole anchorages within Port Davey, and there are a few beaches to be had. 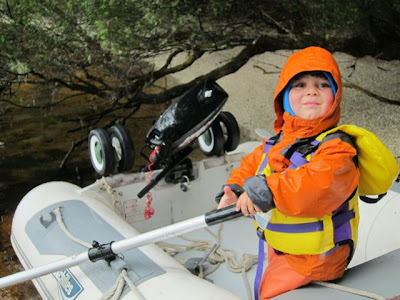 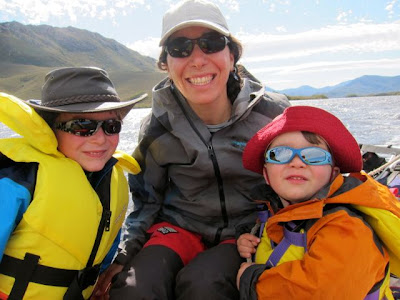 And then, when you walk out to the outer coast, there are delights like this. 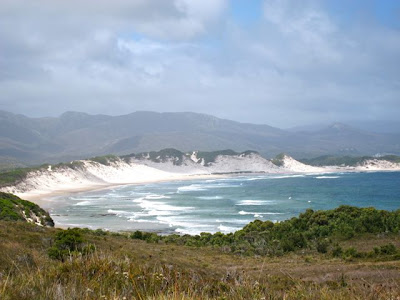 Australia has such good beaches. 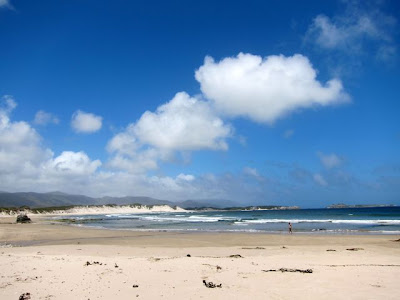 And, then, the bushwalking.  Port Davey is similar to the south end of Kodiak Island, in that it is generally unforested.  The open landscape invites walking, and we got in some good family outings. 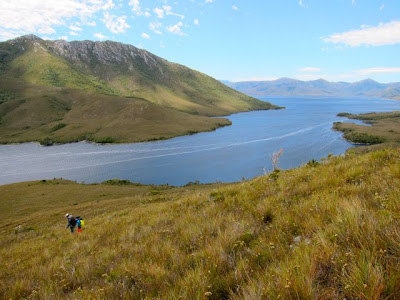 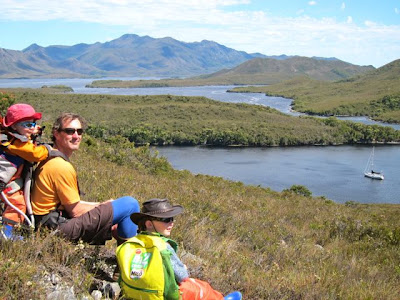 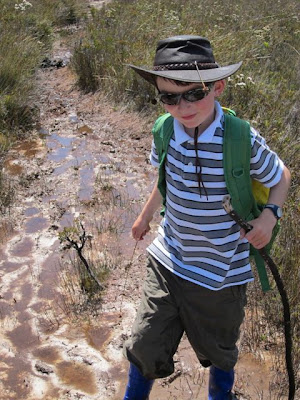 This is Elias on the outbound leg of our Spain Bay - Stephens Beach walk, when his spirits were still high enough to take mud in stride.  On the way back there were tears and a certain amount of wailing about "stupid bushwalks" and "stupid mud".  In a lot of ways he still is such a little boy. 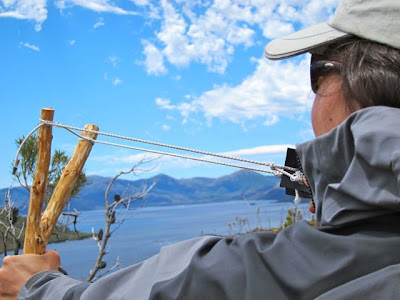 The birds were a more mixed delight.  On one hand, we saw both an emu wren and a ground parrot while in Port Davey.  The first is likely the oddest of all Tasmanian birds - a little wren without flight feathers in its tail, that, bereft of rear-end lift, flutters along with an odd vertical orientation to its body.  The second is a cursorial parrot of the button-grass plains, not to be missed on a visit to Port Davey.  I had seen both birds when I was in this area in the 90s, and seeing them again was really my only goal for this visit.

Another bird that I saw on the last visit, but did not see this time, is the orange-bellied parrot, Neophema chrysogaster.  This one isn't such a happy story - the wild population of this bird, which nests only in southwest Tassie, is nearly extinct.  There are less than 50 individuals alive in the wild, and the species will soon live only in zoos.  The blind at Melaleuca that used to be the heart of the "recovery" program had an abandoned feel, with unused nest boxes collecting dust on the floor.  Heartbreaking. 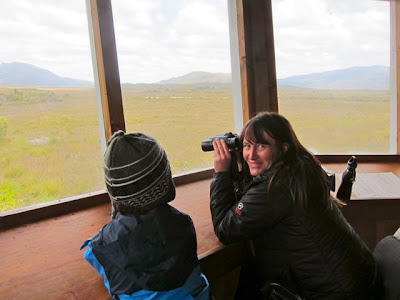 There was a fourth "b" at the center of our stay, and that of course was the boat, where we spend so much of our time.  The boys took to dressing up as knights and holding jousting contests up and down the length of the cabin, from their cabin to ours.  It wasn't a quiet game, but I find it much easier to live in this intimate space when the boys are playing any game, no matter how loud, rather than when they are fighting. 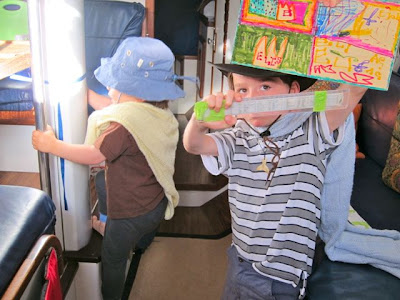 The boys as knights - Eric in cape and helmet, Elias in cape with sword and shield.

And that was our experience of Port Davey.  We had a great sail back, with flocks of prions (we expect fairy prions), diving petrels, shy albatross and a white-headed petrel around Southwest Cape, a night at anchor in New Harbour, and then clouds of shearwaters at the entrance to D'Entrecasteaux Channel.  Eric only threw up once on the way back.

Port Davey was a capstone on our Tasmanian experience, something to console us for everything else that we didn't manage to experience while we were here.  And now, this second stint in Tassie is nearly through.  In a fortnight we go up to Queensland for a visit with my family, and then, once we return to Hobart in early February, we'll be looking for the first weather window to cross the Tasman to New Zealand. 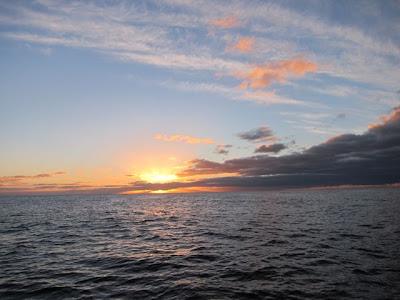