We're back from the southwest of Tasmania, into the familiar waters of the D'Entrecasteaux Channel.  Hobart is a few days away; once there, we'll be into our final two weeks of preparing for the crossing to New Zealand.  Alisa is working on her town list tonight, with a nearly frightening intensity.

Meanwhile, now that I can again post pictures to the blog through the yachtie blessing/curse that is the internet, I'll catch up on a bit of our adventure in Port Davey.

Here's a day that stood out - the day that I hiked up Mt. Rugby with Wade and Chris from Take It Easy.

The views from the top were everything you'd hope for - the open, unique southwestern corner of Tassie, laid before our feet.

We didn't know that there was a bushfire just out of the frame in this first picture - there was no sign of it when we were on the summit. 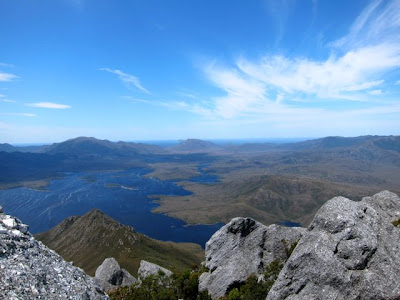 It was a hugely windy, and hot, day.  So windy that it was uncomfortable to sit on the summit block of the mountain. 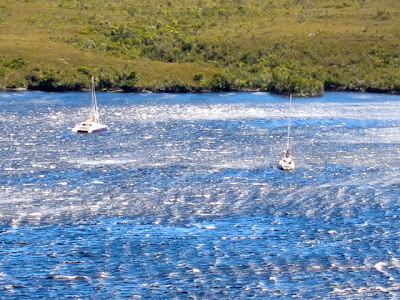 Take It Easy and Galactic in 40-odd knot gusts in the anchorage below.

When we were nearly all the way down the mountain, a smoke plume appeared above the summit.  By the time I got back to Galactic it looked like this. 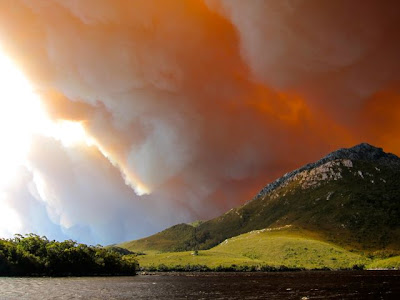 We haven't been in Australia long enough to be at all used to the intensity of bushfires.  How the sky in the first picture turned into this in two hours or so is beyond me. 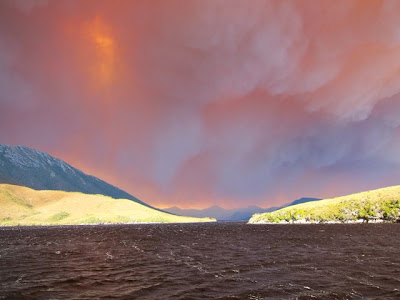 It looked a bit like the Mayan end time, come a few days late. 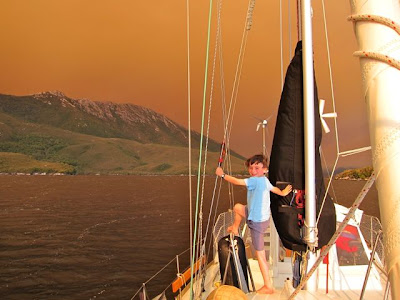 The fire was miles from us, and we were in no danger.  We watched the glow of the fires at night from our next anchorage, and the smoke obscured the views of the coast on the sail back.  But on the east coast of Tassie, things have been much more dire - homes destroyed, the Tasman Peninsula cut off, the police searching for missing people.
Posted by Mike