You'll excuse me if I talk about my oldest kid for a moment.

Elias is nine, and seems to be taking an unreasonable degree of delight from the life that he lucked into by being born the child of two marine biologists who were just about to set out on an open-ended sail on a smallish boat.

He has become our go-to for any questions of field identification when we spot a bird that is new to us.  He leafs through our field guides in his spare time and has a fantastic memory for what he reads.  I have learned not to voice my doubts too strongly when he expresses opinions on questions of range or plumage.  That memory is a counter-weight to his greatest weakness as a junior naturalist, which is an over-enthusiasm for making sightings of the unusual or note-worthy.

He is also finding a passion for wildlife photography and has long expressed the hope that one of his photos might be "good enough" for the blog or (forbid!) Cruising World.

The bird pics in this post are all his.

Many of these rockhopper penguin shots were taken on Westpoint Island in the Falklands, where Elias made a solo visit to the colony.

I woke with a migraine that day, so Galactic wasn't mobile.  Alisa was canning up the mutton that was hanging in the stern arch when we sailed away from Beaver Island.  So Elias set out on his own, hiking from the jetty at the settlement across the island to the combined albatross/rockhopper colony.

I love the image of his nine-year-old self, by himself, creeping slowly around the birds so as not to disturb them and taking pictures of what he saw.  The surf booming on the base of the cliffs, the wind in the tussac grass, the constant hullabaloo of the birds, and Elias, both excited to be taking it all in on his own and also comfortable in the knowledge that this is the sort of adventure that you have when you're nine.

Not to tell stories on him, but as I understand it he stopped to take a leak at one point, forgot to re-buckle his belt when finished, and somehow managed to lose the entire belt before he realized his mistake and went back to find it.  I love the combination that story tells - a kid who is still coming to grips with the basic mechanics of life who is also completely unfussed over the proposition of striding off to a penguin colony by himself.

Elias is also something of a fire-eater when it comes to the selection of destinations for Galactic in the global South ("I've never been seasick in my life!").  He is dead keen on visiting South Georgia.

Stay tuned on that one.
Posted by Mike 9 comments:

(No) Time For Travel

So, we had this magical month in which we did nothing much more than sail around the Falkland Islands.

Before we set out on this endless-seeming trip of ours, when I'd talk to friends who had dipped into the world of long-term travel, this is what sounded so alluring to me: the idea of time to spend in this way.  Big chunks of it, applied to the pursuit of quixotic goals.


Now that we're back in Stanley, that idyllic month seems very far away indeed.  The carefree month just gone, and the carefree month that we hope is coming up, are broken up by a period of mad boat prep and science work for me.

Alisa and I finished replacing a particularly difficult window at midnight last night, and then fell asleep at the saloon table, leaning on each other's shoulders.  We've replaced six shrouds on the boat, and gone out to tune the new rigging Falklands-style - beating up Stanley harbor with two reefs in the main and a scrap of jib.  I'm making new deadlights for windows that we aren't going to replace, and there's still the staysail forestay to replace if we get to it.  And the wind vane needs some attention.   And, no matter how much of these jobs I've gotten finished by the end of this week, I'm getting on a plane on Saturday to fly up to Alaska for a stint of in-person science work.

In the midst of all this, there is little time for travel.  We're tending our own various gardens for now, and not putting ourselves forward so much in Stanley.

Meanwhile, as you can see from these images, one of the delights of our time here has been the wildlife.  The albatross and various penguins are about as unconcerned with people as you could wish.  It's easy to find settings where it's just our family sitting next to a seabird colony, watching the show.  The boys have been in heaven.

All of the land-based shots here were taken at Westpoint and Carcass Islands, where we were very warmly received by either the caretakers or owner.  We were free to just wander around and entertain ourselves on both islands - very much a travel experience, as opposed to the regimented experiences of tourism.

And Carcass offered us another chance to get up close with some elephant seals.  Wonderfully argumentative creatures, those. 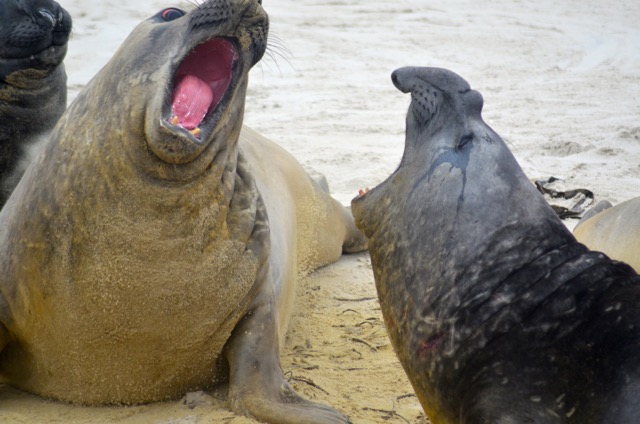 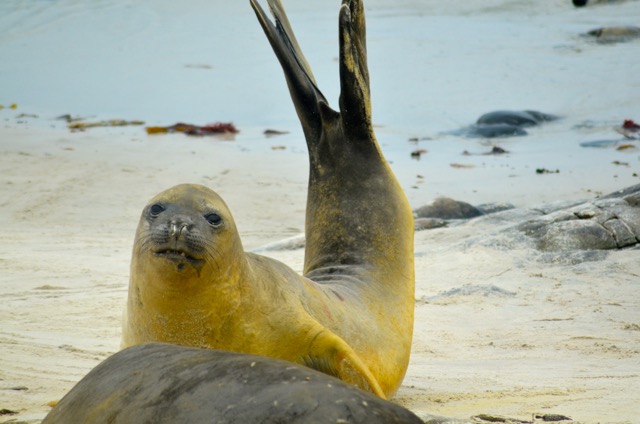 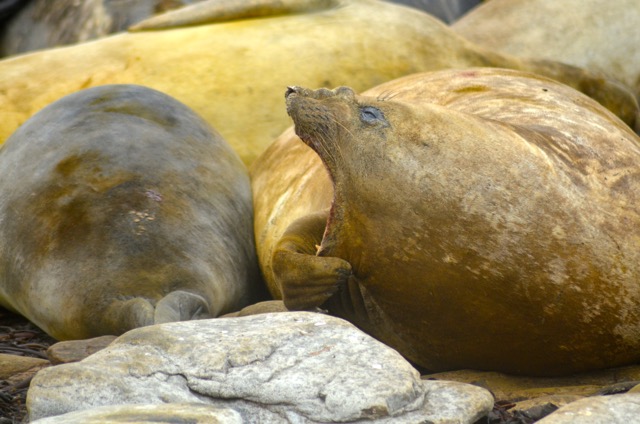 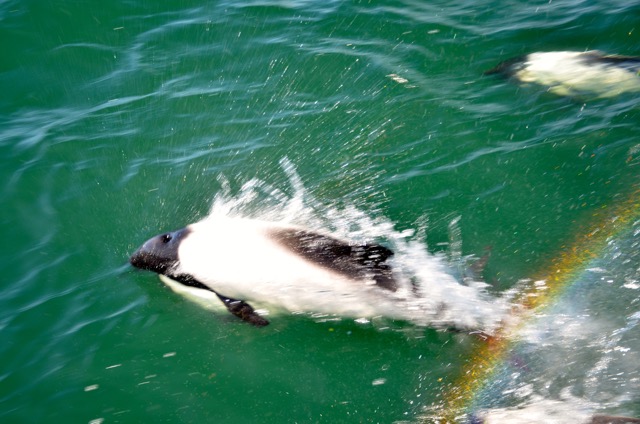 We met Leiv Poncet, who is from the Falklands, during our last winter in Tasmania.  When the winter ended, we sailed off to New Zealand, and Leiv set off back home for the Falklands on board his boat, Peregrine.

-Come out to the Falklands, he told us before he left.  -All the reindeer and mutton you can eat, I have an old Perkins you can strip for parts, and you can dry out on our jetty and do some work on your boat.

Well, two and a half years later, I can tell you that Leiv is a man of his word.

We visited Leiv on Beaver, and, as you might have seen in an earlier post, he kept us well fed with reindeer and mutton.  He pulled the dead Perkins out from its grave and let me strip off various useful bits.  And Galactic duly went dry at the jetty to deal with some maintenance.  Sure beats going to the boat yard.

More importantly, Leiv also shared his home with us - Beaver Island.  The Poncets own the lot of it, and it is a very remarkable place indeed.  Leiv took the time to show us some of the corners and nooks that make it so remarkable - some of the places that you would know if you grew up there.  Spending that time on Beaver with Leiv gave us an experience of the Falklands that was much richer than anything else that we've had.


Just now I haven't the time to do the place and our experience there justice with proper writing.  The heat and fury of the summer season are on us.  We're hammer and tongs after getting the boat ready for our next passages, and I'm also hammer and tongs at the science, taking care of the demands of what turn out to be my peak work season.  So this brief description will have to do.

I'll finish with this shot of Alisa sailing away from Beaver.  We've left a lot of islands with bananas hanging in the stern arch.  Beaver is the first place we've left with hanging mutton. 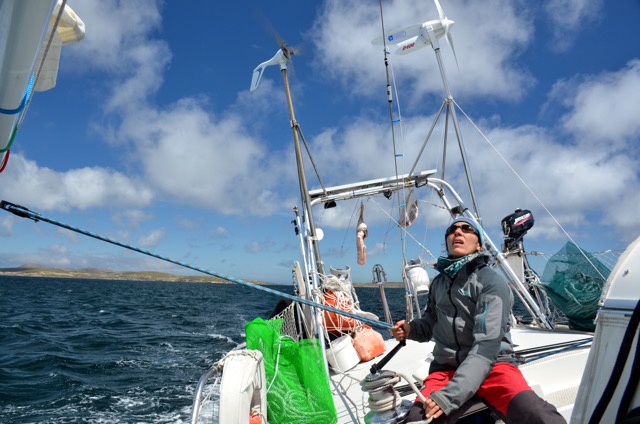 Tomorrow (with luck!): some of the remarkable wildlife of the Falklands...
Posted by Mike 4 comments: