Kodiak is the place where Alisa and I spent the last seven years of our time in Alaska, and also the place that we sailed away from on Pelagic, bound for Australia, nearly six years ago now.

I've been back a couple times for work in recent years, but until this month the whole family hadn't been back in four years.  My favorite indicator for just how long we'd been away is that we had a three-year-old child who had never been to Alaska.

We just finished a ten-day visit to Kodiak.

For the first four days or so, I was unreservedly smitten with the place.  If you're visiting Kodiak in the springtime when there are more than seventeen hours of daylight every day, and you're catching up with friends you haven't seen in years, the place can seem flawless.

But in the second part of the visit, after we had listened to enough stories about how people are actually leading their lives in Kodiak, I began to remember that it can be a very demanding place to live.  The winters can be brutal, interpersonal relationships in a town of six thousand people with no road access to the outside world can be challenging, the economy is sometimes marginal, and the cost of living is high.

For all that, we love the place, and this visit confirmed us in the idea that when we finally swallow the anchor and sell the boat and return to life ashore, Kodiak is the place we'll be looking to return to. 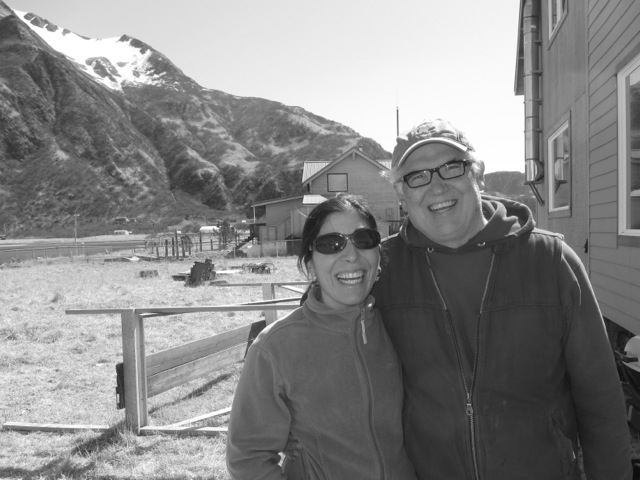 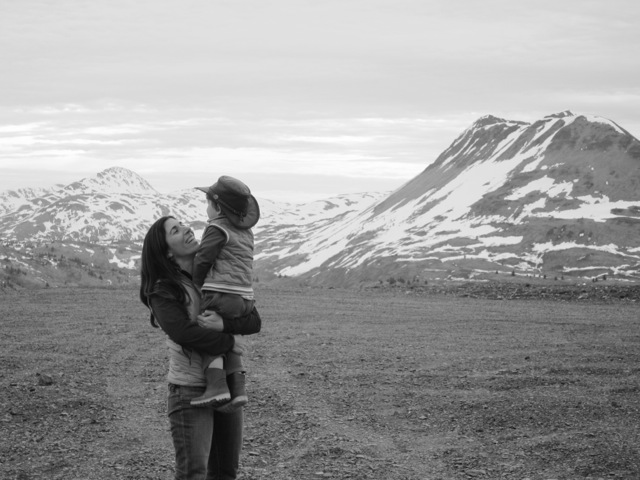 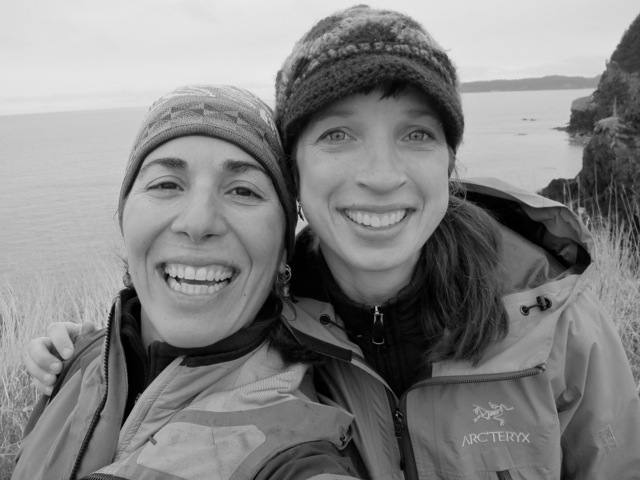 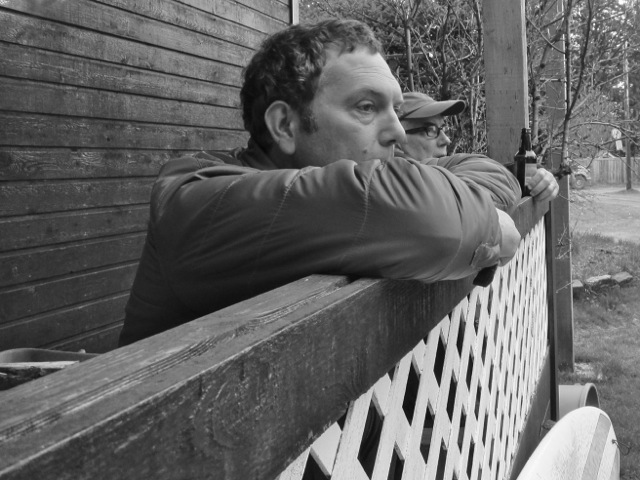 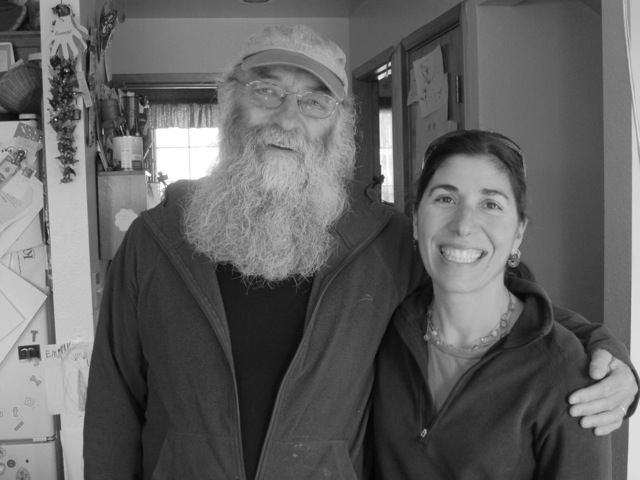 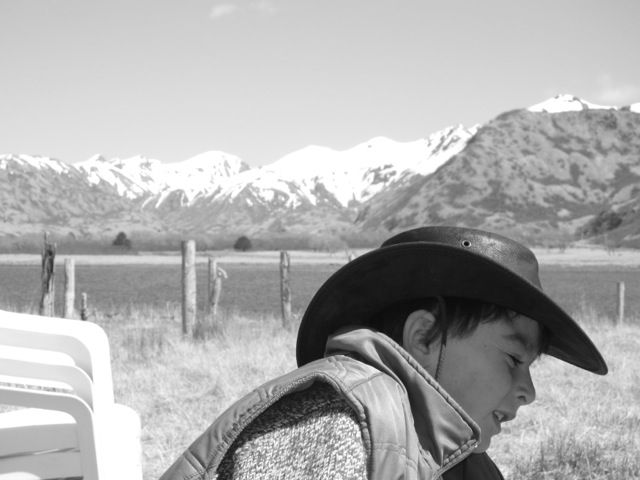 Email ThisBlogThis!Share to TwitterShare to FacebookShare to Pinterest
Labels: Alaska, the big picture

Of all the unflattering photos of your kid that you could share with the world... 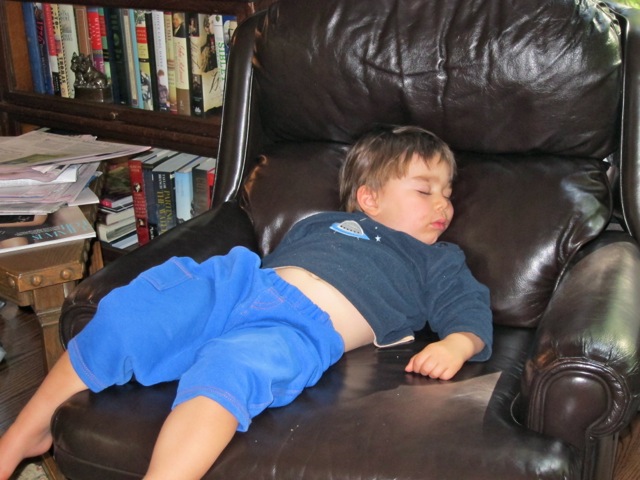 We arrived in Boston without any great drama, but Elias' and Eric's sleep patterns were of course still happily back in Opua.  Nothing could keep Eric awake during the day (above), but at night he was ready to party.  Our experience is that young kids shake off jet lag especially slowly, and for night after night we were forced to deal with a wide-awake, partying fool of a three-year-old until two or three in the morning.  Or later.

Then we got to Kodiak, where our friends Zoya and Patrick are very generously putting us up.  Elias was beyond delighted to learn that he would be sleeping on a mountain goat skin. So far, Kodiak is living up to its billing in that over-the-top, stereotyped Alaskan way.  Ash from the newly-erupting Pavlof volcano has been sighted in town, and the weather, for the 18th of May, which is well into spring up here, is feeling quite...Alaskan.  Low temp today was -1°C, high 6°.

It's hard to understand why, and I might not have thought it out well enough to explain, but there are a lot of ways in which Kodiak feels more exotic than any any other English-speaking place that we have visited in the last few years.

Maybe it's just that when you're a visitor you see only the surface of things, which of course as a resident no longer register.  When you drive into town from the airport on an impossibly gray afternoon, you're just dumbstruck by how derelict the place looks.   Bluff, which is, as far as I can tell, New Zealand's best example of a down-on-its-luck, high-latitude fishing town, comes off as a picturesque Swiss village by comparison.

But then you start catching up with friends, and hearing about how everyone you used to know has been going about the business of their lives since you've been gone, and you start to remember the magic.  This place is just as ordinary as can be, but at the same time there is an edge to it, and a close familiarity with the unbending realities of life, that makes it like nowhere else.

Our time here is going to go too fast. 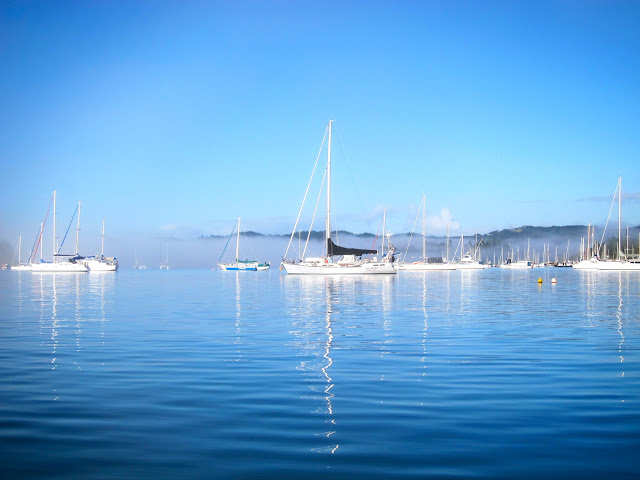 We're in Opua now, one of the global centers of yachty-ness.  Opua is the northernmost port of entry for En Zed, and I think of it as a funnel at the end of the tradewind route across the South Pacific, catching all the yachts that come down from the tropics.  We're out of synch with the boats that crossed last year, so don't know many people here...but we did run into Momo, a family of four whom we last saw in Suwarrow, Cook Islands, in 2008.  It's funny how some people stick out in your memory, even if you never spent much time with them.

The energy in Opua is all about sailing away, as the migration to the tropics for the cyclone-free season has begun.

We're leaving too, but not on the boat.  We've parked Galactic on a mooring ball, and have a date with an Auckland - San Francisco flight tomorrow.

The boys have been vibrating with excitement for the last week.  I only hope they calm down once we're on the plane...
Posted by Mike 7 comments:

Whenever I'm pulling the dinghy around from the decks of Galactic I am of course very very careful to hold on tight to the painter, mindful that a moment of inattention will be repaid with the sight of our tender (Smooches) drifting away from the mother ship.

After nearly six years of living aboard, it finally happened.

I was dropping the dinghy from the halyard where it had spent the night while we were anchored in Hicks Bay.  I was distracted talking to Elias, and forgot that I had tied the dinghy securely by its towing bridle the night before, but had only wrapped the painter loosely around a cleat.

I lowered the dinghy while I was trying to follow Elias' latest soliloquy, then untied the towing bridle.  I put the halyard away, and then turned back to see the dinghy drifting away, the painter floating loosely behind.

It was a really windy day, and the dinghy was moving fast.  The only thing to do was to jump into the water right away, with all my clothes on, before the dinghy was out of swimming range. 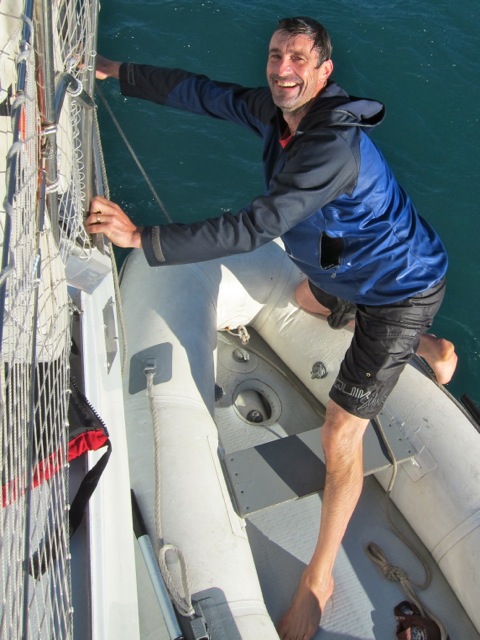 Alisa took the pictures after I rowed back. 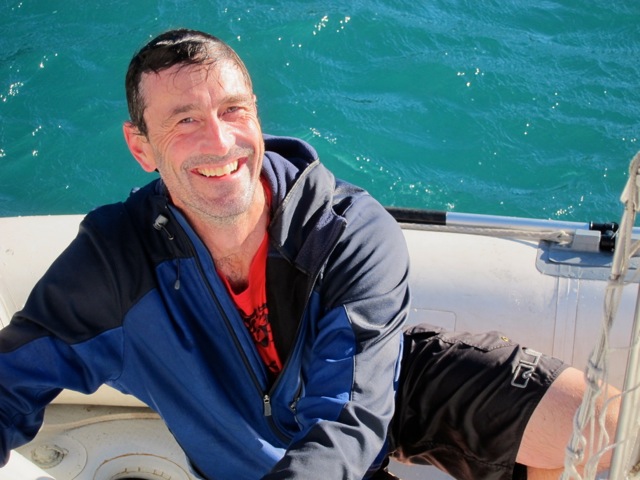 I'm glad the water was warm.
Posted by Mike 1 comment:

We were talking to our good friends Robb and Emma a while back via skype - they headed north from Hobart on Aratika about the same time we headed east - and the question came up of how many days a traveling boat might spend sailing vs. sitting at anchor in some delightful spot.

We had never calculated our ratio of days spent traveling to days spent sitting still, but I remember reading something years ago, when I was a kid in Ohio dreaming of the sea, that a ratio of 1 day sailing to 10 days at anchor was pretty common.

Alisa and I were curious, so she sat down with our log book and figured it out.

We were a bit shocked.  No wonder we're so tired at times!

I'd love to hear how that ratio works out for other traveling boats... 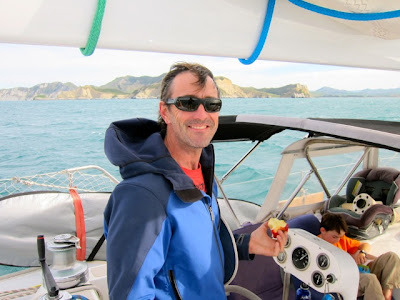 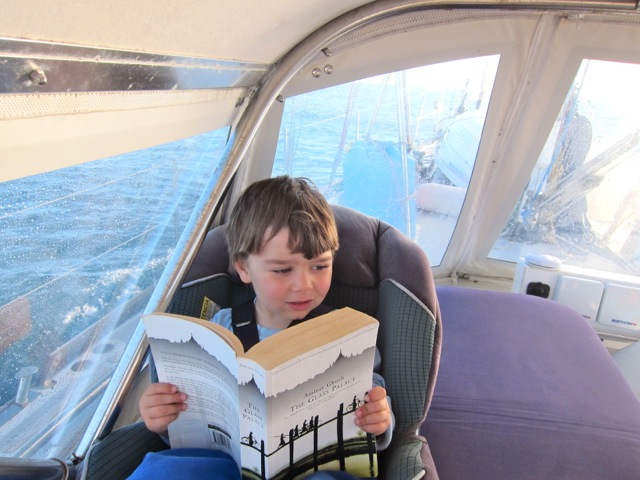 End of April, Start of May

On board Galactic, birthdays come two at a time - first Eric's and Alisa's, then a few months later Elias' and mine.

This particular end of April saw Eric turn three.  He awoke on the day saying, "I'm not two any more!" 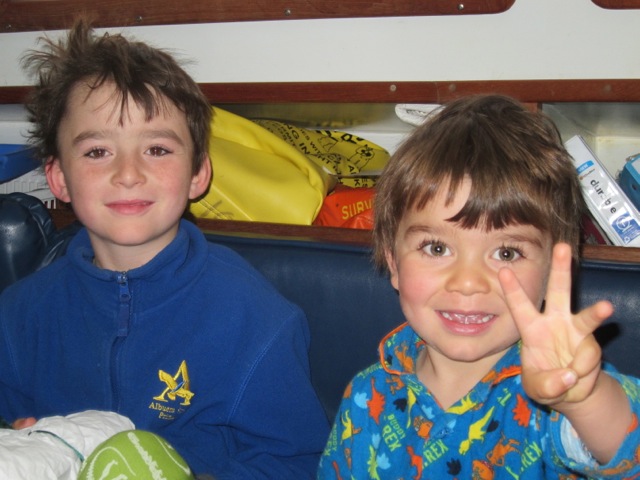 His transition to three-ness has been presaged by all sorts of milestones in recent months.  Alisa threw the very well-used stroller away in Napier.  Eric's out of nappies, and our upcoming sail from New Zealand to the tropics will be our first-ever passage without diaper buckets lashed on deck. 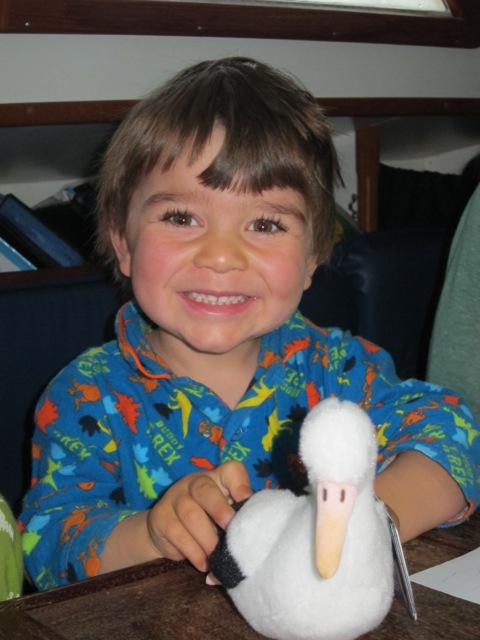 Eric's premier gift this year was a stuffed royal albatross.  The fact that it's a royal is important, as Eric can tell a royal from a shy albatross, and the royals are the ones that he calls "my friends."  That's not a smile above, by the way.  That's his royal albatross imitation.

Alisa did a penguin cake.  That's a smile, by the way, not a penguin imitation. 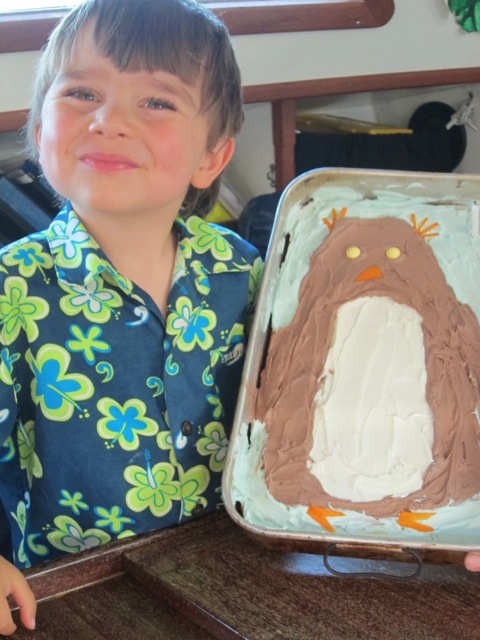 Then, the beginning of May saw Alisa turning 39.  (Again.) 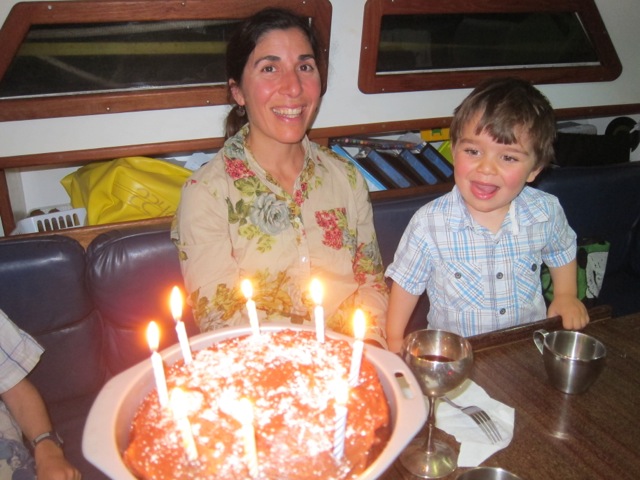 I managed to struggle through the process of making a cake (from a box!) and dinner (mjeddrah, with real-time instructions from Alisa).  The boys rose to the occasion, and I think Alisa got what she asked for - a happy day. 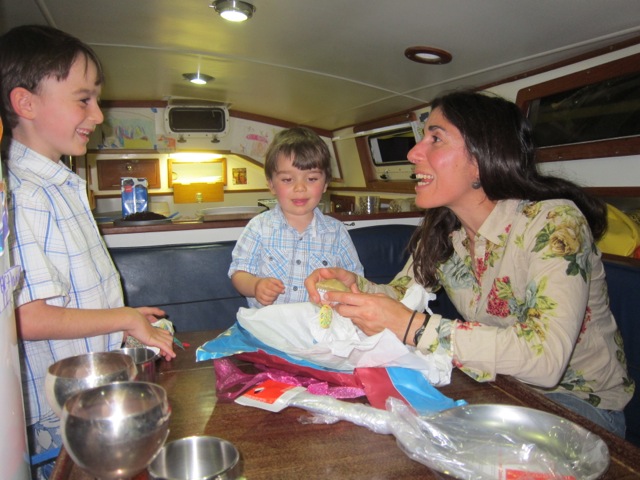 After dinner we had a dance party. 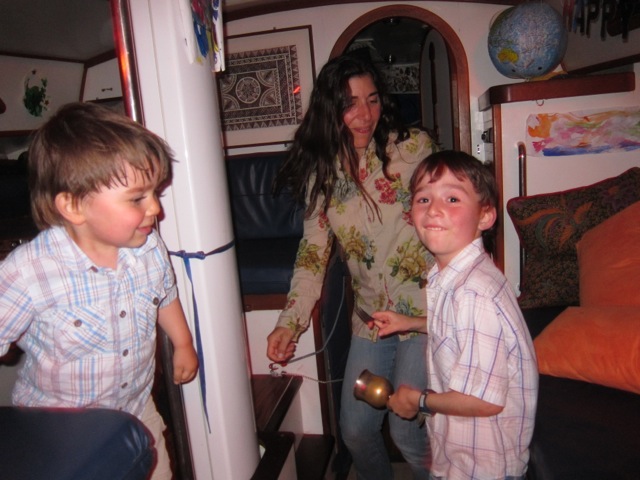 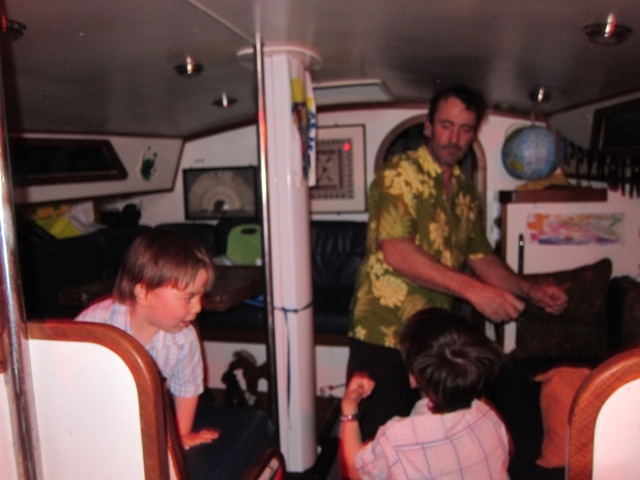 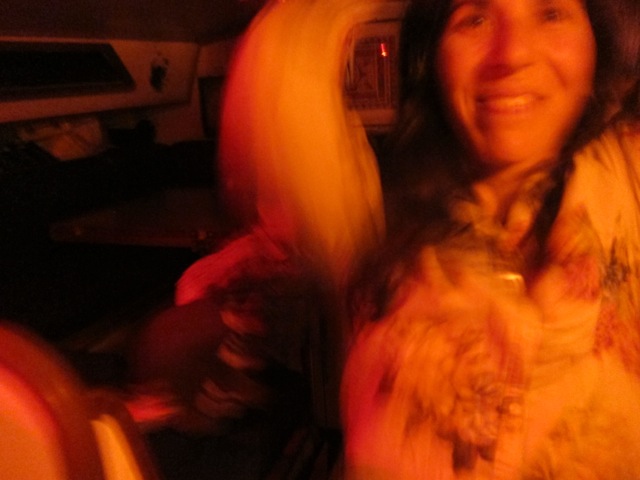 That part was Elias' idea.
Posted by Mike 11 comments:

I remember it so well.  When I was a kid we had a 19-foot centerboarder, an O'day Mariner named Waltzing Matilda.  After my parents would go through all the rigmarole that is involved in organizing a family day of recreation, and we were finally out on the boat with the sails raised, my dad would ask my sister and me if we felt like steering.

We'd both say "no" - holding the tiller meant suffering the spotlight of parental attention, and we both were happy to beg off.  So my dad would keep steering, and I imagine part of him wondered why we were out there if he was the only one to be sailing.

Fast forward about 36 years or so.  You might remember that Elias has started driving our dinghy.  And he's gotten pretty good at it - but lately when I've asked if he wanted to drive, he's just said, "no, thanks".

I suspect the same dynamic - if he drives, he has to listen to me badgering him to go straight, make little corrections, pick out a point on shore and aim for it, etc., etc.  Who wouldn't rather just be a passenger?

But I'm determined that he should be able to drive a boat as well as...well, as well as a kid who has spent 6/7 of his life living on sailboats.  So a work-around occurred to me.  Elias loves to think that he's helping out, though there are still precious few jobs on the boat that he can do.  And he LOVES to earn money for doing a job.  So I told him that it would be a big help if he could start driving the dinghy for me, and would five cents a trip (one way) be acceptable pay for him?

So far, it's worked.  He drives (quite well), and I try not to badger him too much while he does it. 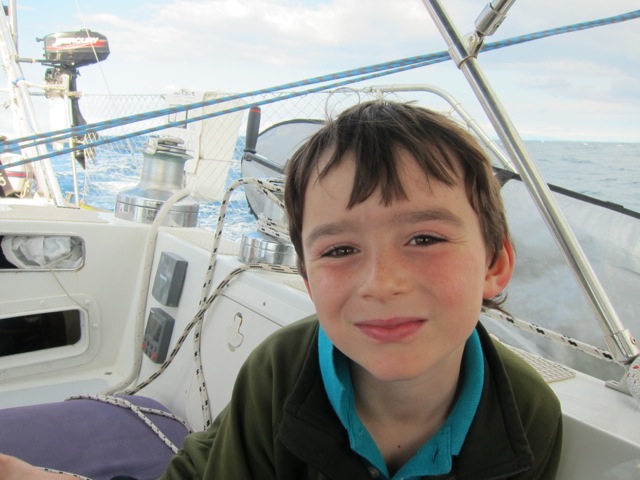