I always maintained that when you drove into Anchorage, Alaska, you could hear a giant sucking sound on the outskirts of the city - the sound of all the jobs that pulled people in from elsewhere in Alaska, and kept them from moving away. The "Anchorage vortex", I called it.

"How do we end up spending time in places like this?" I asked Alisa.

To see what I mean, check out these two views of Mooloolaba taken from Pelagic. 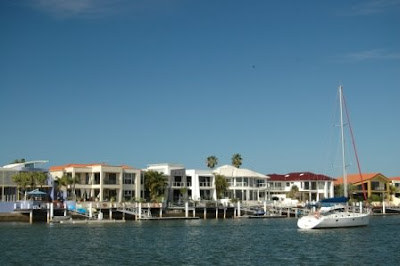 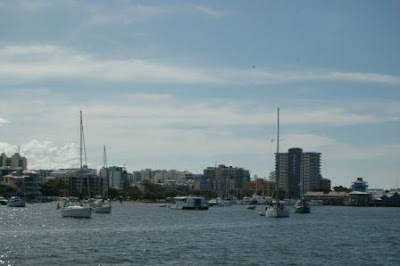 Now compare with our view in Iluka. 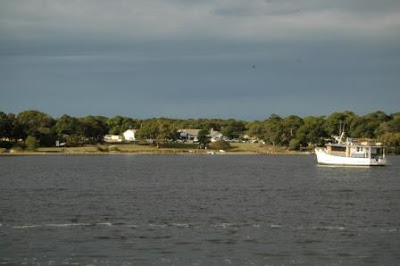 Much more our style.
But, it must be said that Mooloolaba is very convenient for taking care of life chores. And it's also an easy place to keep Elias entertained, with a great beach and a veritable cornucopia of nearby playgrounds. So we've been taking care of a few life chores, and boat chores, and making the best of it.
Tomorrow (Monday) we will have been here a week. We will finish up with our chores for the moment, and on Tuesday we'll be free to hop up the coast to the nearest reasonable cruising, in the Great Sandy Straits. And, spot on schedule, on Tuesday the gentle southerly winds that have been blowing are forecast to be replaced with 20-30 knot northeasterlies, making a run north to the Great Sandy Straits unlikely.
So, we've been vortexed. No sailing for us for a while, just more time in this unlikely harbor.
Posted by MikeAlisaEliasEric 1 comment:

We finally left Iluka on Saturday, though I still wasn't over being sick and Alisa and Elias both had watered-down versions of the same bug. After negotiating the swell in the Clarence River entrance, we settled into our old sailing routine. It was a treat to see how complex sailing tasks came back to me instantly, like setting up the windvane to steer us on a broad reach or getting the spinnaker pole rigged for sailing wing and wing. Also very satisfying to see how immediately Elias settled into being on passage again after a break of four-plus months. There was none of the antsiness that he gets when he's cooped up on the boat at anchor. He just shifted into sailor mode, entertaining himself with what was available on the boat. And the four months of growing up since he last sailed made it much easier for him to be in the cockpit for long stretches while we sailed, which meant that we could all be upstairs at once. This was especially helpful for Alisa, who for some reason was a little more queasy than normal; instead of watching Elias below decks, and getting more seasick, she could stay in the cockpit and take solace in the fresh air and open horizons.

I was engrossed in the sailing, and being on the ocean again. I watched the swell that was constantly catching up with us and swinging Pelagic from side to side. I watched the little shearwaters that were dipping their wings to the water as they flew circles around us. I took care of all the little tasks of improving the sail trim and correcting problems of chafe and plotting our position and keeping us on course. In my free moments from all that, I just stood in the cockpit and watched the boat sail.

In order to avoid the strong south-setting current along the coast we sailed only a mile or so from shore, much closer than we normally do, and it was great to watch all the beaches and headlands spooling by us as the day progressed.

I stayed on watch until two am. Boats hate to sit still, and our four months of stasis had taken a toll that was reflected in a series of little things that broke during the first day out. Little bits of the electrical system fizzled, an obscure piece of running rigging gave in to age and wear. While Alisa and Elias slept I kept myself occupied by jury rigging a new stern light.

Elias woke me a little before dawn, calling out from his bunk, "I'm all done in here!" All three of us sat in the cockpit and watched the sun rise, and we were reminded together of the magic progression of dawn at sea: feeling the boat move in the pre-dawn half light, then watching the waves slowly grow from leaden undefined shapes to brilliant beaten metal as the light grew, then eating breakfast in the cockpit with the knowledge that we had ahead of us a whole day at sea to enjoy.

A few hours later we had a great biological overlap moment off the Queensland coast. An albatross (we think either a yellow-nosed or a black-browed) wheeled around the boat for a few minutes, an inhabitant of the Southern Ocean who was north for the winter. And then, an hour later, we saw flying fish, sure signs that we were in a tropical water mass.

Alisa stayed queasy through the day so I cooked dinner as we were coming into Mooloolaba at dusk. We entered the harbor just after dark, about 33 hours after leaving Iluka, and we wondered at our different pace on the way south - last spring it took us three weeks to get from Mooloolaba to Iluka.

We were keen to keep moving north, our appetite whetted by the bit of sailing we had done, so we planned to stay in Mooloolaba for just a couple days to take care of various chores. But then we looked into our options for marinas up the coast where we could leave Pelagic during our upcoming visit to North America, and for transport back to Brisbane where our international flight commences.

What a bummer! We're used to moving at the combined dictates of weather, tide and whim, so that it always seems strange to revisit the standard travel world, where you're asked to choose between fixed departure and arrival times weeks in advance of actually travelling. That's a tough mix with travelling by sailboat, as we hate to commit to a schedule when the vagaries of weather can so easily delay us in some out of the way spot. And then there's the cost of non-yacht travel. A couple days' sail north, which costs us exactly nothing aboard Pelagic, would incur a surprisingly steep charge for three airplane tickets to get us back and forth to Brisbane.

So, our delightful 33-hour sail may be all the passagemaking that we do for a while, and Mooloolaba, which is a short drive from Brisbane, may turn out to be Pelagic's home while we fly back for my sister's wedding.

And that's (mostly) what's up with us.
Posted by MikeAlisaEliasEric No comments:

I was pretty sure I was dying. So I figured I might as well get some mileage out of the situation.

I got sick five days ago. Since then it's been occasional fever spikes, the sore throat to end all sore throats (like, too sore to drink water), lots of sleeping and no appetite. I felt good enough yesterday to run a few errands, and I learned that the jokes I've been sharing with Alisa about being Australia's first case of swine flu weren't very funny to other people. Then it all spiked again last night, and I thought I was going to die for the second time.

It's so bad that I think I'll finally let Alisa drag me to the GP tomorrow.

And, of course, that's five days that I haven't been finishing up the last bit of work on Pelagic before we head up to the reef for the winter.
~~~
On a much brighter note, yesterday was Alisa's birthday. When queried beforehand, Alisa said that all she wanted was "a happy day". It did indeed turn out to be a happy day, and one of the things she enjoyed was the time I watched Elias so that she could finish up annual maintenance on one of our primary winches. Cruising dudes of the world, continue to eat your hearts out! 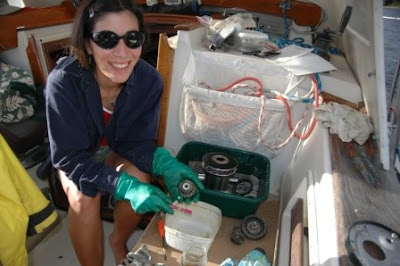 I managed to turn out a serviceable cake. 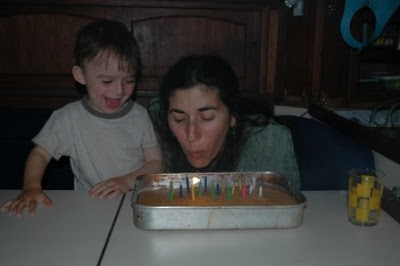 And her big gift, a photo book of our trip across the Pacific, was a hit. 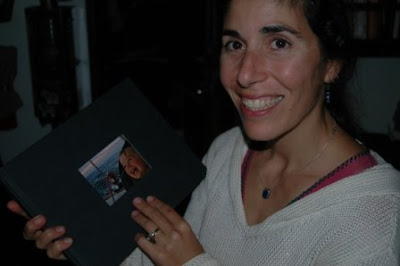 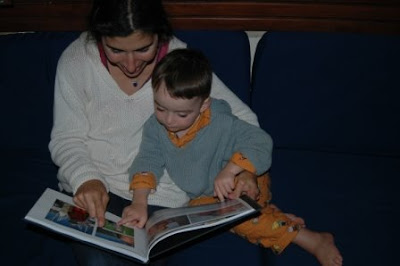