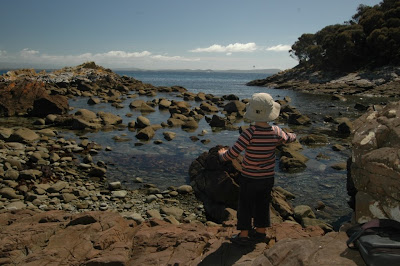 Bruny Island.
Whatever else we may have buggered up in life, I am more and more of the opinion that raising Elias on board a sailboat has been a very good decision.  There is the valuable closeness with us, of course, and the way that he is enmeshed in all facets of our daily lives.  But more than anything I love watching him grow up as an outdoor child.  For all its inconvenience and less-than-romantic realities, living as a family on a sailboat seems again and again to give us an out from those widely recognized, but hard to change, difficulties of life in the 21st century rich world.  Like, for instance, children who grow up sedentary, mesmerized by digital images, and indoors. 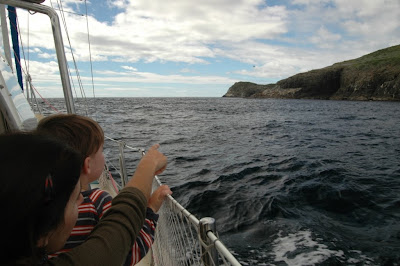 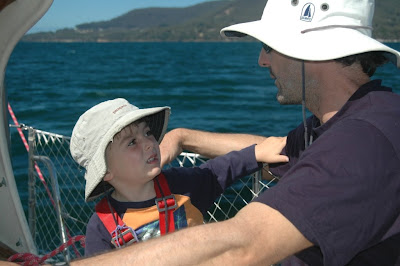 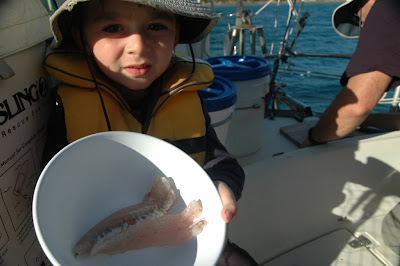 Cleaning the flathead we caught. 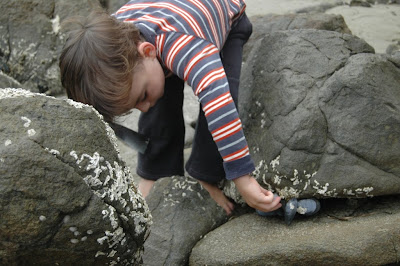 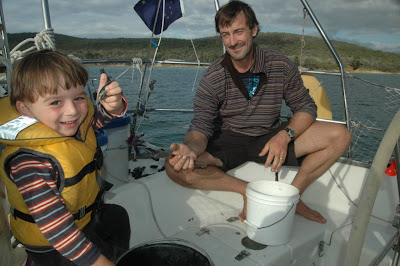 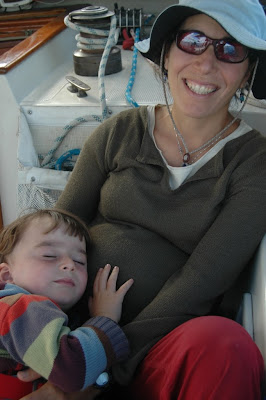 Elias talks a lot about his little baby brother. 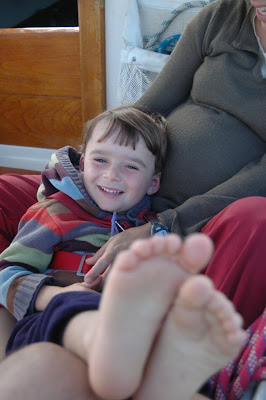 The end.
Posted by MikeAlisaEliasEric 7 comments:

On not making fun of Australians

Confession: when Alisa and I arrived in Oz, we used to make fun of things Australian, and Australians themselves, in the privacy of Pelagic.

And we used to do it every day.

To a newcomer, Australia just screams out its stereotypes.  There are the nicknames: I have had grown men introduce themselves to me as both "Macca" and "Razza".  There are the strange conversational traits: some Australians have this frustrating habit, when trying to get across a vaguely complicated idea, of just giving up mid-sentence with a defeated, "and, yeah..." that segues into silence, and seems to be a plea for their interlocutor to start up with another conversational thread while they locate their scattered brains.  There are the incredibly crass billboards around Brisbane that advertise dubious pharmaceutical sexual aids to men.  There is the rigidly defined social norm of being a "regular bloke" in all-male social interactions.  There are the baffling Royalist tendencies.

There are the meat raffles at pubs around the nation every Friday night.

And, perhaps more than any of these trifling details, there is the palpable lack of ambition that blankets vast swaths of the cultural landscape.  This is the country where anyone will understand what you mean if you say "tall poppy syndrome": the collective, and nearly universal, desire to bring down anyone who aspires to something beyond the common lot.

"Say what you will," I said to Alisa just about every other day in our first six months here, "but these people have never been to the moon."

And, while I'm at it, here's my very own Australian joke:
Q: Why aren't Australians religous?
A: Because communion service has a one-drink limit!

Pretty good, no?
~~~
A few weeks ago, though, I noticed that I wasn't making fun of Australians anymore.

This society is starting to make sense to me.  I begin to glimpse the nation of individuals behind the stereotypes.  I have developed real admiration for the "it's not complicated!" attitude of some particular Australians who are, very quietly, leading lives that are admirable mixtures of adventure, louche dissolution, and family responsibility.

And the upsides of this society are starting to seem particulary attractive.  The sense that everyone deserves a fair go is bedrock here, and contrasts painfully with the attitude in the U.S.  Australians have a well-developed sense that the common good is something that everyone has a stake in promoting.  The upside of the "it's not complicated!" attitude and lack of overarching ambition is that this is a developed society that does a very very good job of enjoying life.  I have not yet been to a boring Australian barbecue.  Which is to say that while Americans are (stereotypically) forever thinking about ways to get ahead or get to heaven, or to get something, Australians are (stereotypically) forever thinking that everything is pretty OK, but might be better still if they were at the beach.

No points for guessing which attitude resonates with me, the peripatetic yachtie.

And, finally, Australians are not laboring under the sense of exceptionalism, and divine mission, that is slowly suffocating the U.S.  Americans are forever carrying on about how the slaveowners who wrote up the Constitution were actually God-fearing Christians.  Australians just know that they have a good thing going, and call theirs "The Lucky Country."

God knows, things are not perfect here.  But still, I'm starting to feel at home.  I'll never pass for a fair dinkum Aussie, and I'm determined to see the inside of my grave before I know the difference between Rugby League and Rugby Union.  But I am starting to think that our family may have an association with this place that goes beyond our current stay.  I'm starting to feel a little Australian.

So much so that Alisa has told me that while she doesn't mind being addressed as "matey", she would prefer it if I'd stop calling her "mate".
Posted by MikeAlisaEliasEric 4 comments: 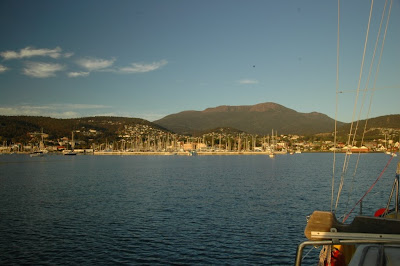 We've moved from the dock at the yacht club out to a mooring.  This is the view we wake up with - the southern suburbs of Hobart, with Mt. Wellington behind.
Today Nick, one of our Hobart doppelgangers, showed us around up on Mt. Wellington. Nick and Marls are our dopplegangers because they just crossed the Pacific on a Crealock 37, they are expecting their first child a week before Alisa is due, and Marls is a marine biologist. We think they are the good kind of dopplegangers, though, not the bad. 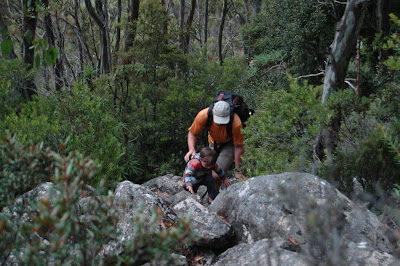 We walked up to the Organ Pipes, the dolerite cliffs at the top of Wellington.  The trail started as a steep scramble, which Elias did much of under his own power.  "I've never been rock climbing before!" he said as this picture was taken. 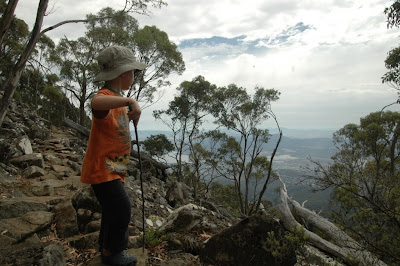 Elias enjoying the fruit of his efforts.  We had brought along the climbing gear, and while Alisa and E. had a hike and a play in a spring and a snack, Nick kindly hauled me up a two-pitch climb called Blue Meridan.  I was glad that Alisa and Elias weren't watching from below, as I grovelled my way up both pitches, and Alisa would have had to answer endless questions along the lines of, "Why is Daddy falling?"

As far as I can recall, this was my first climb since the boreal spring of 2000!  Time was when mountain climbing was mostly all I wanted to do, but now I mostly want to do other things.  Great fun to get out, though, and great to jump right onto a two-pitch climb.  And now, I don't have to worry about crossing rock climbing off the must-do list before we leave Tasmania.
Posted by MikeAlisaEliasEric No comments:

Well, we seem to have landed on our feet in Tasmania.  After finishing up the cruise down the east coast of the island (some pictures below), we landed in Hobart last Sunday.  Within days we had concluded that the people of this place are just as wonderful and friendly as you would expect from the fantastic physical setting of the island.

Constitution Dock, right in the center of town, where we had expected to stay, has recently instituted a policy of discouraging liveaboards, and turned us away.  Since Alisa had a prenatal appointment the next morning, we decided to splurge on a week at the Royal Yacht Club of Tasmania (at $190 a week, a bit of a splurge!).  This gave us a base for getting to her appointment, and also for finding our feet in this new town, and it also turned out to be a great place to meet friendly local sailors and to catch up with members of the long-distance cruising fraternity who used to collect at Constitution Dock.

I think the best measure of how warm our welcome to Hobart has been is that in our first week here, we either had new friends aboard for dinner or went to someone's house for a barbie five of the seven nights.  A variety of people have gone out of their way to make us feel welcome here, but I think that the highest marks for hospitality must go to Mike and Ingfried, who met us briefly on Maria Island, where they were camping with their two girls.  They told us to ring them when we got to Hobart, and when we did, they had us over for a barbie, where they served muttonbird, or short-tailed shearwater, which is a real treat for any Alaskan seabird biologist.  It's the full-grown but not-yet-out-of-the-nest chicks that are eaten, and it appears that you have to be well connected in Tassie to get a hold of muttonbird.  Mike and Ingfried also introduced us to a variety of their friends and relations, who all turned out to be interesting people, and then at the end of the night Mike had everyone write down their contact info for us so that we could kick-start the building of our own Tassie community.  And all of this after a few minutes' aquaintanceship on Maria.  Very nice, of course, and the night also gave us a great answer for the inevitable ice-breaking question that we get from other locals.  "So what have you done in Tassie so far?" people ask, and they invariably love it when we answer, "We've eaten muttonbird!"

We've still been here only a week, and are still looking for a car, though we have a couple good leads, and we also have a good lead for a five-month housesit that would get us through the birth of crewmember #4.  Alisa likes the birthing center at the hospital, I've been putting out feelers in the local marine biology community to get to know some of my local professional peers, and Hobart generally feels like it will be a good place for us to live for a year or so.

Here are some pics from the second half of our cruise along the east coast of Tasmania, which already seems a lifetime ago, though it was only a week. 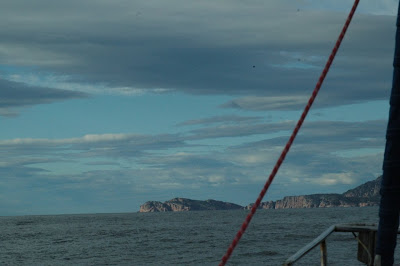 Shouten Island in the morning light. 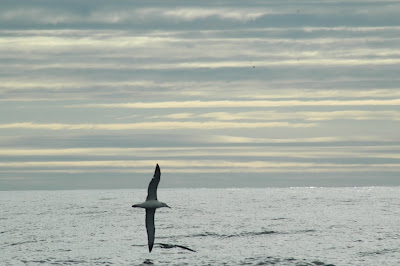 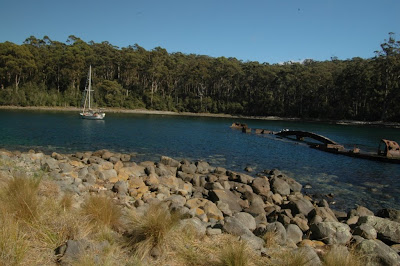 Canoe Bay, where we anchored behind a wreck. 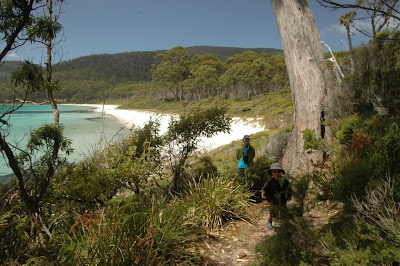 The walking track from Canoe Bay. 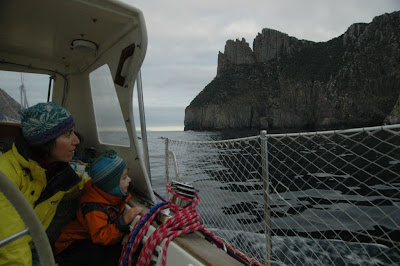 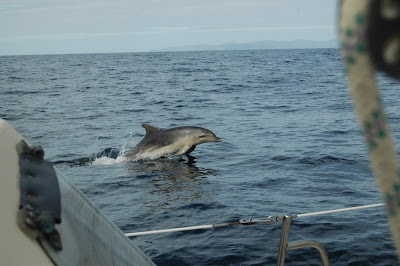 Motoring up Storm Bay to Hobart, we had a great display of leaping Pacific offshore bottlenose dolphins. 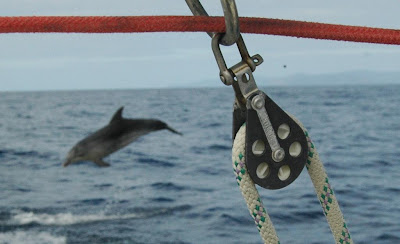 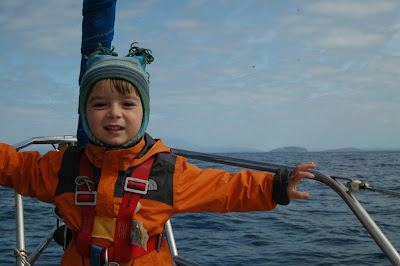 The end.
Posted by MikeAlisaEliasEric 2 comments: