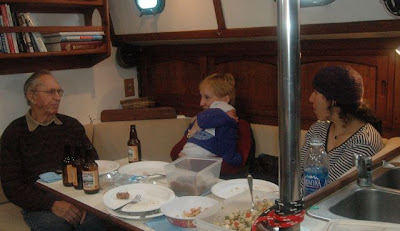 This shot was taken on board Pelagic, way back in our home port of Kodiak.  That's my grandfather on the left.  He and my parents and sister were in Kodiak to meet Elias. 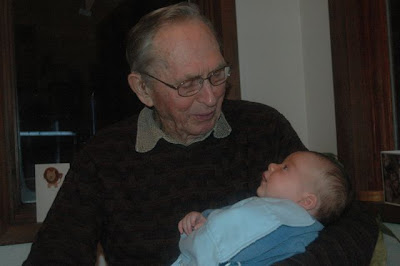 My grandfather and I were close from the moment we met in the Detroit airport, when I was an infant on my first trip to the U.S.  An established bit of family lore has to do with the way I immediately took to him in the airport, and how my grandmother had to drive home while my grandfather held me, since I cried in anyone else's lap.  A complementary bit of family lore was established in our old house in Kodiak (above) when Elias cooed and smiled at my granddad with a display of obvious affection that seemed improbable from a six-week old.


Three months ago my granddad asked me on the phone what we were planning on naming the new baby.


-I've got an idea, he said.  Why don't you name him after your grandfather Elmer?  He paused a second before he answered his own question - I wouldn't name a dog Elmer!  He laughed and laughed at the joke, then dissolved into a coughing fit that had me fearing for his 94-year-old heart.


There was a story that we always told each other about the time that he gave twenty-year-old me a ride out to the highway in Colorado.  I was excited at the hitchhike to Alaska ahead of me, and just barely aware of how tough it was for my grandpa to drop me off on the side of the road.  Before he drove away he said, hey, you don't have a hat!   And then he gave me the one he was wearing.  I wore that hat for years, until it was in ribbons, and I still have the remains of it in storage back in the States.


And there's the more recent story about the time Alisa and I were eating dinner with my grandparents.  Alisa, making conversation, asked Elmer what sort of gun would make a good deer rifle for her.  He didn't answer, just excused himself from the table and came back a few minutes later with a rifle.  To people who get into that sort of thing, it was a very special gun: a pre-'64 Winchester Model 70 6.5x55mm.  More important, it was a rifle that was light to carry, didn't kick much, and could shoot accurately over the long distances that you want to shoot if you hunt deer in the mountains of Kodiak.  In other words, the perfect deer gun for Alisa.  He handed it to her, to keep, and it was her deer rifle from that moment until we went sailing.
~~~
My granddad died last week.
My parents, who spent a good bit of their time in recent years looking after him, found themselves in the strange position of being here in Tasmania, half a world away, when his end came.
~~~
If you make up stories to answer unanswerable questions, or if you accept answers to unanswerable questions from your own tradition, or from other peoples' traditions, then you are religious.  If you don't do those things, then you are not religious, and you're left to live with the unanswerables and imponderables.

My granddad's death came less than two months after Eric was born.  The day that Elias was born, Alisa's wonderful uncle Ray died.
These sorts of matched events don't answer the unanswerable.  But I do suspect that tell us a fair bit of what we need to know.
Posted by MikeAlisaEliasEric 4 comments:

This is the state of Pelagic's interior lately - complete disarray as I pursue the much-anticipated day when she will be on the market, with all trace of our family life removed, anonymous and sparkling.
This scene is weirdly similar to the disorder that attended various stages of preparation for our trip across the Pacific.  The days are short this time of year in Hobart.  When it's getting dark at five o'clock my memories of all the work that went into preparing to live on Pelagic blend with the present work of preparing to leave Pelagic, and I find myself brooding on the futility of things... 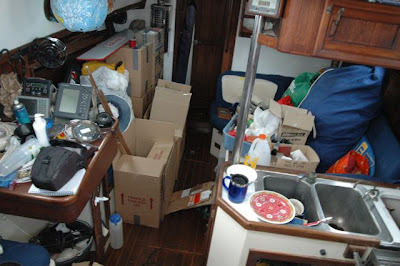 In the light of day, though, Alisa and I are cheered by one thought: it's time to find the next boat!
Our very wonderful housesit overlooking Kingston Beach ends in two and a half months, and we're starting to feel the pressure to find new accommodation for our young family.
-Without a boat, says Alisa, we're just homeless.
Posted by MikeAlisaEliasEric 2 comments: