The End of an Era

Every great streak comes to an end.

Elias has sailed something like 25,000 miles in his life - we don't really keep track of the total distance we've covered. In all our time sailing he has never once complained of feeling seasick, no matter the state of wind and sea. He eats no matter how rough it is, he reads books in his bunk up forward even when the waves have him experiencing zero gravity every twenty seconds, and through it all he has never admitted to feeling the slightest bit green.

I have often bragged about his iron stomach. I have accepted it as one of the few constants in our peripatetic family life.

But - and of course you saw this coming - it's all finished now. He is no longer perfect, in this one little sense. He is just another flawed human being, like all the rest of us.

On the trip from Recherche Bay to Port Davey, Elias admitted to feeling a bit queasy down in the cabin, and had to come up into the cockpit to feel better.

Of course, his brother was much worse off - poor Eric vomited three times in the 12 hour trip. So though Elias broke his streak, he was still doing quite well in comparison.

Meanwhile, we're happily ensconced in Port Davey. Eric is completely better. We have explained the reasoning behind the ban on fishing in the National Park to Elias about 20 times. And tomorrow our friend M-A flies in to join the crew.

Well, we're outta here.  Tomorrow morning we're heading south, even though the boat has never been so disorganized prior to a trip.  I'll be putting away tools as we motor down the D'Entrecasteaux Channel!  With any luck we'll remember how to make the computer and ham radio talk to each other, and will be able to update the blog that way.  Either way, we plan to be back in Hobart in three weeks or so.

Merry Christmas to all. 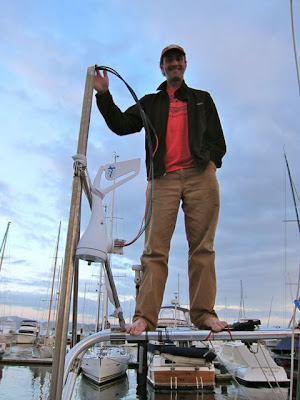 Santa - See You In Port Davey!

The school year is over for Elias.  We're so pleased with how he did - he started the year unable to read, and now he's something of a phenom, tearing through paragraphs and chapters at will, reading aloud to us in that stilted cadence of the new reader.  And, socially, he was just another kid in the class, which is a very nice place to be if you've spent much of your life away from peers and stable friendships. 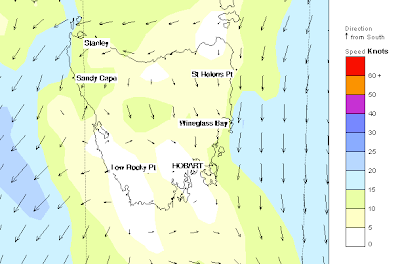 Now that school is out, we're free to sail out to Port Davey, on the roadless southwest coast of Tasmania.  Tomorrow is Friday, so the traditions of the sea (and the state of Galactic) mean that we'll have to wait until Saturday to leave.  It's easy to wait a week for good weather to get out to Port Davey, but the forecast (touch wood!) is looking very good for getting around the corner on Saturday and Sunday.  That's a snap from the Sunday forecast above - looks like a motor fest, but at least they're not calling for gale-force westerlies!  With any luck at all (touch wood again!) we should be out there and well settled by Christmas Eve morning, so that Santa can find us.
Posted by Mike No comments:

As our time in Australia nears its end, there remains one frontier of cultural understanding that we haven't explored.  As much as we may feel at home in this country, we are completely in the dark when it comes to Australian sports.

So Elias and I pushed back the veil of our ignorance, just a little bit, by attending the third day of the current cricket test match this weekend - Australia vs. Sri Lanka. 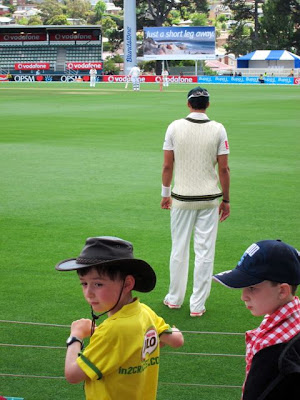 It was a great father-son outing.  I found that I could even explain a few things about the game to Elias. At this point, I'm appreciating every moment when I still know more than him about something.

And - I enjoyed the game.  Two Sri Lankans were batting the entire time we were there - the Aussies couldn't get them out - and I appreciated the stately pace of the match as the day went on.

All that - plus there was face painting. 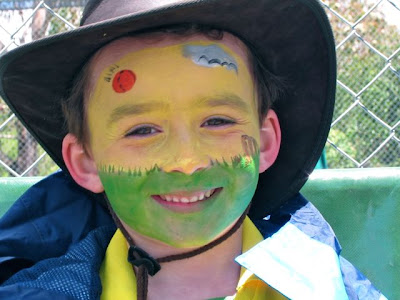 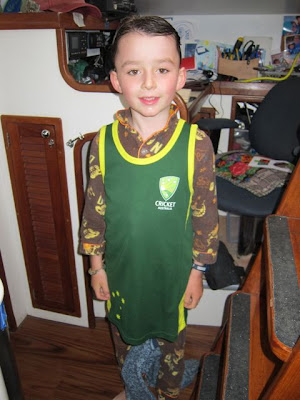 Meanwhile, it hasn't escaped our notice that the children killed in Connecticut were Elias' age.

Looking across the Australian/American divide, I can say that things don't have to be that way in America.  Gun control works.  My kid's school in Tasmania doesn't have to practice for mass-shooting incidents the way that American schools do.

The politics of saturating American civil life with guns, like so many of the dark/angry aspects of right-wing politics in America, is a relatively recent phenomenon, dating to the civil rights movement.  Fifty years ago, the NRA was focused on gun safety, and the idea that anyone should be able to own a semi-automatic assault rifle with a large-capacity magazine was completely foreign to American political discourse.

So, this too, will change.  The pendulum will swing.  It will take a generation, and many many more six-year-old children will be shot and killed before change comes, but eventually we will make things better in America. 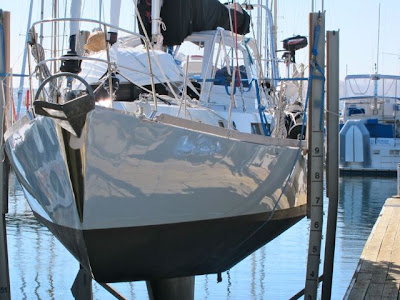 Galactic went back into the water this morning.  We're done with another round of annual boatyard maintenance, and the Mothership is looking ready for the upcoming season.

This was the "easy" bout of boatyard maintenance that I've been dreaming of for years now - beyond changing a seacock, I just did the routine tasks this time around.  Still and all, with a day or two of rain thrown in, it took me a week to do everything.  A 45' boat offers a lot of acreage when you're prepping and painting.

And now, the countdown is on for real - eleven days until the school holidays begin, and we're free to untie from the dock and point the bow at Port Davey.
Posted by Mike 4 comments: 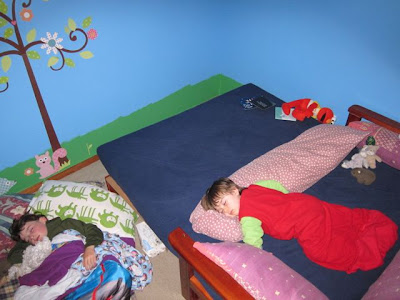 Galactic finds herself once more in the boatyard.

Since we draw the line at living aboard in the boatyard with the kids, we are in a housesit for ten days or so - it's a very nice house with great views of Mt. Wellington and the Hobart Tip, very very generously lent to us by friends of friends who happen to be away on holiday.

In this housesit, each boy has his own bedroom.  We thought that Elias would love that, since on the boat the brotherly jockeying and jousting that goes on for much of the day continues after the boys go to bed in their side-by-side bunks in the forward cabin.  A certain amount of name calling ("poopy head!") and yelling goes on before they fall asleep on the boat.  And we though Elias would be happy to take a break from that.

None of it.  Elias was adamant that he wanted to sleep in the same room as his brother.  So we set up a mattress on the floor in Eric's room - that's them, fast asleep above.

Right now we're pouring ridiculous amounts of money and effort into the boat to get ready for our upcoming season, and I've had moments, not exactly wondering if it's worth it, but wondering how much longer I'll think it's worth it.

And I found a certain amount of validation in Elias' desire to sleep near his brother, a bit of the answer to the question of whether there's any payoff to this nomadic lifestyle of ours.

The enforced intimacy of the boat can be a grind, especially with a two-year-old in the mix.  But while we just notice the crazy part of living on top of each other, it's also a much more "traditional" way for a family to live together - the idea of separate rooms for each kid is a pretty recent notion.  So there's a closeness to our current family life that we wouldn't get on shore.  And it's pretty nice to see how much Elias wants to continue with that closeness here in the housesit, and to reflect on how closely the boys are growing up...
Posted by Mike 6 comments:

We bought Elias his first fishing rod this week.

It was a reward for good behavior.

We have a system - when he's really good, he gets a "rainbow card".  When he's particularly bad, he loses a rainbow card.  When he accumulates ten rainbow cards, he gets a reward.  Like a fishing rod.

(We're stingy with the rainbow cards.  It took him months to accumulate ten.)

You've never seen a kid so happy to have his first fishing rod. 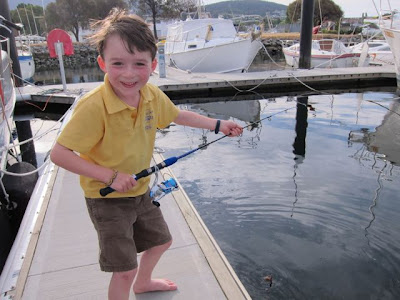 On his second day with the rod, it happened - his first fish.  He'll likely never be happier than he was right at this moment. 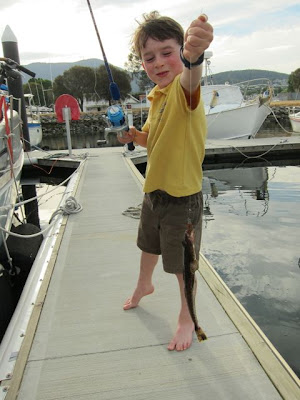 Not only was he happy, he was also out of our hair as we worked at getting the boat ready for the coming season.  Shoulda gotten him a rod long ago, I thought to myself.

But then I had to unhook three fish this morning before he went to school.  I was a good sport about it.  But I think the novelty might be fading for me.
Posted by Mike 4 comments: