Well, it happened - we finally got out for a sail on Galactic.

And we liked what we saw. 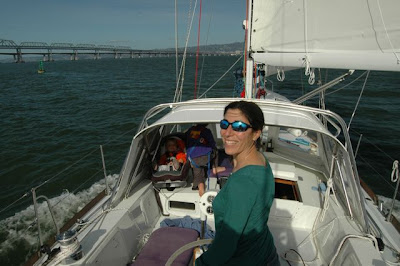 The boat is a lot bigger than what we are used to, but she doesn't feel too big to handle.  Much of the core sailing gear - sails, mast and boom, rigging - is brand-new and higher-quality than what we would have bought if we were fitting out the boat ourselves.  One of the benefits of all this good sailing gear is that she sails quite well in light airs for a boat displacing 20-odd tons.  Alisa and I agreed that she promises to be a good sea boat, and we are looking forward to some heroic sailing when we get to the trades.

There were some other things that we liked about the new boat a lot.  All the control lines for jib and main are in easy reach of the wheel, making it easy for one person to sail.  And it turns out that there is plenty of room under the dodger for both boys - Eric in his car seat and Elias on a cushion. 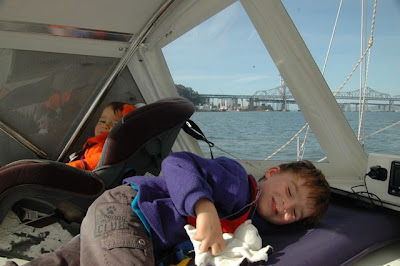 And, just to make it a real-shake down sail, we got some unplanned action out of the day: the wind blew, the boat heeled, two drawers emptied onto the sole and a coffee pot ejected its contents all over the galley.  Meanwhile, that part of the crew who was down below changing a stinky diaper began to harbor dark thoughts about that part of the crew who was on deck and apparently making the boat heel for the sheer dirty pleasure of it.

We had both stayed up late the night before, and in our tired and grumpy state we found ourselves enjoying a spirited discussion about who had the tougher job - the person changing the 10-month old's diaper down below, or the person watching the antsy four year old in the cockpit while sailing the boat between the pylons of the Bay Bridge under conditions of shifting wind and adverse tide.

This is the sort of moment that I suppose might lead some people to reconsider the whole notion of sailing with small children.

Alisa and I, though, having been through it all before, kept in mind that most of the program of sailing with the family is wonderful.

We finished the day with a lovely sail down the narrow ditch separating Oakland and Alameda.  Our spirits revived, I risked a look back by saying to Alisa, "You called me an ------- back there." 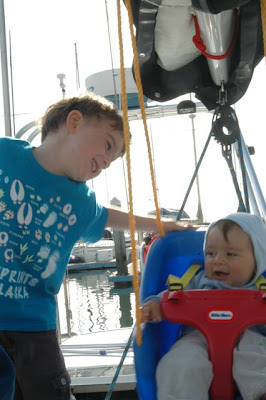