Well, Once in a Lifetime fans, this is a real-time posting, just like those written by bloggers with way too much time on their hands for commenting on, say, their pet Alsatians. Don’t get used to it!

Eureka sits on Humboldt Bay, a glorified estuary with an entrance guarded by a bar that sometimes makes the prevailing northwesterly swell break. With a good coastal forecast in hand for the sail to San Francisco, we called the local Coast Guard station this morning for a report on bar conditions. Their answer was a six to eight foot swell with occasional ten footers, rolling in the channel and breaking on the middle ground, potentially hazardous conditions. There are two jetties that protect the entrance, and the channel for navigation is right against the southern jetty, with the middle ground shoal occupying the middle and northern area between the two. We decided to go take a look for ourselves. We found surfers doing their thing on the middle ground, and current and foam swirling around in the channel. Fishing boats were making it out in the relatively smooth channel, but it was all too intimidating for us with our inexperience of river bars, and we turned around and tied up again at the dock that has been our home for the last four days.

Alisa had taken a Bonine against the four hours that we expected to be motoring with the forecast eight to ten foot swell on the beam, and she found herself severely backwinded all during the afternoon, fighting off the chemical drowsiness. “It’s so hard with these short trips,” she says. “Just when you’re getting into the rhythm, you go in, then you go out and have to get your sea legs all over again.”

We’re having our first experience with the group approach to interpreting weather forecasts. The forecast hasn’t been entirely perfect since we’ve been here, with that eight to ten foot swell rolling down from Alaska every day. The three or four cruisers here all talk about the weather, and ask each other when they’re going. It can be useful to talk things over, but it’s also easy to build your plan based on the prevailing group opinion rather than your own interpretation of available information. We’re pretty sure that we’ve happily dealt with much worse conditions in the past. But when you’re sitting in the harbor and not too experienced it’s easy to get intimidated. I haven’t been helped by the NOAA website I found that explains the distribution of individual wave sizes for a given significant wave height (defined as the mean height of the highest one-third of waves in an area, the number that the forecasts predict). Individual wave heights follow a Rayleigh distribution, with very big individual waves occasionally coming along. So, for a ten foot significant wave height at a period of eight seconds, you can expect a 19 footer (or bigger) to come along every 2.2 hours. Whoa. Ignorance may be bliss.

The forecast is for the swell to be a foot or two lower tomorrow, and we’ll take another look at the bar.

Eureka is blessed with good used book stores, and we made another fruitful visit to them on our unexpected day ashore. I began Men at Arms last night, the first of Evelyn Waugh’s Sword of Honour trilogy. By the time I reached page 40 I was loudly wetting my pants, filling the little salon with a variety of guffaws and snorts while Alisa read through the finish of Breakfast at Tiffany’s with the look on her face of someone doing something self-improving. Evelyn Waugh is as funny as anyone, even Mark Twain, and the English social milieu that he has to work with is delicious raw material for an American reader. Bought three more Waughs today, including the second book in the trilogy. Standing watch is a grand time for reading. I’ve been plowing through the books on our way down the west coast. Good stuff early on, and then when it’s after midnight and I’m too sleepy to give Ryszard Kapuściński the attention he deserves, I start reading books about sailboat maintenance.

Walking back from the bookstores we are surrounded by the traffic pulsing around the historical downtown. So loud for such a small town, everyone driving fast, with looks of competence and boredom and contempt on their faces. Pedestrians are tattooed and pierced and sunglassed and possessed of extravagantly palpable street attitude. In Eureka. Elias, riding in his pack on my back, partly thaws the game face of many, giving me the weird experience of over and over watching the blank scowls of approaching strangers waver into an almost-smile while looking at a point just behind my left shoulder. The idea of a “stranger” is much more threatening here than in Port Townsend, and entirely foreign to any social idea that operates in Kodiak. In P.T. a stranger might conceivably be a friend that you haven’t met. You don’t get that idea in Eureka.

We walk down to the boardwalk along the river. Eureka is a town that ignores its riverfront. Boarded-up buildings, empty lots and graffiti-ridden diesel locomotives abandoned and surrounded by chain link fence separate downtown from the water. The boardwalk was an apparently expensive attempt at civic recognition of the river. Its comfortable benches and engineered railings that follow the organic curve of the riverfront have been abandoned to the halt and lame, the outcast and the desperate. A malnourished cripple shuffles back from his trip to the mission. A mother holding a sixteen ounce Budweiser and a cigarette in the same hand tells a little girl, “Angel, pat that dog on the back end, not the front.” Musicians with matted hair and missing teeth sit on benches in groups and strum guitars to no audience but each other, nodding their heads in sleepy unison. A shirtless man slumps against a woman, both perfectly immobile in apparent stupor. Everyone else wears more than one pair of pants and multiple hooded sweatshirts against the cold that comes each night. A hundred feet away pelicans fly in low formation over the water. Harbor seals glide up the river, their heads and backs two separate bumps in the water’s surface. Cormorants and loons dive for their supper. Smoke from the pulp mill blows across the river in two giant plumes. A good sailing wind.

We’ve been enjoying meeting other cruisers on this coast. Again, it seems that the more experienced are long gone with the season, and we’re with the straggling rookies. Early on anyone traveling in a sailboat seemed like a soul mate to us for their pure novelty and superficial resemblance to ourselves. But now I’m starting to see the vast diversity even within the fairly narrow demographic that cruisers represent (white, older than young, bent enough to want to live on a sailboat). Not all of them are Our People, but we feel a very strong camaraderie even with those we’re not simpatico with. It’s the same ocean that we’re all traveling on, and we’re all bringing an imperfect set of skills to bear on the task.

Will finish by saying what an inexpressible joy Elias has become when he’s on a happy jag. He’s not walking or really talking, but he cruises around the salon incredibly quickly, leaning on one settee and then the other, and he has the initial consonants and vowels of a dozen or so recognizable words. This self-directed motion and beginning verbal expression lets him go on long tears of purely joyful exercises of personality. He grins and laughs and slams his head into the settee cushions out of his overwhelming happiness. Then he picks up his yellow ball and says “buh!” twenty times in ten seconds as he bangs it into the sole. There is no happiness like a one year old’s. 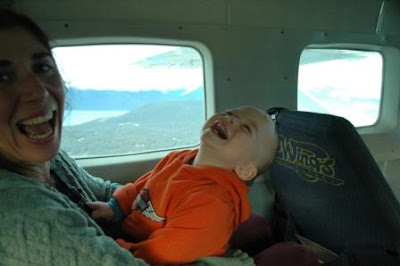