We leave Abreojos on the spur of the moment, hoping to make good on the light northerly breeze. An hour after the anchor is up, that wind is gone. We motor through the day and into the velvet-dark night, stars clear overhead, another yacht showing its lights far behind us. “Mexico!,” I say to Alisa before she goes to sleep at 2000. “South of 26 degrees north!” “I know,” she answers. “How did we get here?”


My watch passes. The sea is calm, the night warm. I look through photos of the first months of Elias’ life and feel myself falling into an abyss. That time is suddenly so long ago. As I page through the pictures that cover the span from umbilical stump to first solid food, I can extrapolate out to the length, and speed, of a lifetime. Our house on Kodiak looks so warm and inviting in the pictures. Alisa and I were both conscious that we might not ever live in such a spot again, with the high ceilings and the big windows looking out on the ocean and the pond that we skated on two memorable Christmas days in a row, the wood stove that provided the perfect atmosphere for weekend days spent reading on the couch when impossible Kodiak storms blew lichen loose from the spruce trees, the big porch over the pond that was warm enough to lounge on about two days each summer. And so on. But we also, and I think Alisa felt this as well as me, were equally sure that the thing for us to do was to sell it and cast ourselves fully onto this trip of indeterminate destination without trying to hold onto the life that we led during those seven great years in Kodiak, a life that we will not return to even if we return to the Island to live.


This is the sort of tangent that I find myself following during night watch, while the unlit western shore of Baja spools us by and two thirds of our little family sleeps below. Alisa and I each take five hours or so of being completely alone with the boat and our thoughts and a good book if we’re not too sleepy.


Dawn finds us near Bahía Santa Maria, our destination, though sailing in on a fitful breeze delays our arrival to the early afternoon. Two whales jump almost clear of the water in the distance, a Mola Mola floats by on its side and our two lures trail behind us, the lines gone limp and lazy with our low speed.


We hear another boat hailing our friends on Free Spirit on the VHF. We try hailing them as well but get no response, and assume that they’re too far south to hear us, the call of Central America keeping them on the move.


Bahía Santa Maria is big, with frigate birds soaring overhead, surf zippering in all along the shore, and a tumble-down fish camp at the head of the bay. After we anchor I lie down on the settee, suddenly exhausted from being up half the night. Alisa and I talk back and forth about getting our dinghy, the Fair Dinkum, into the water so that we can go to the beach.


We finally do rouse ourselves to the job of unlashing the dinghy from deck, putting the two pieces together, and getting the whole thing in the water. We’re both tired, and irritable, and prone to the seesaw of one person’s bad mood infecting the other. Elias is full of beans, running around the cabin happily when we’re below, screaming and crying when we go on deck to launch the dinghy. By the time I’ve got the oars in place and everything else ready the wind has come up too hard for us to take Elias and I row in alone. I hesitate a long time before braving the small breakers on the beach but find the actual landing to be no problem. I’m alone on a huge expanse of sand, a broad beach that curves around this bay for miles. Wind blows sand off the dunes. Ospreys cruise low over lagoons. When I launch back into the surf two little waves break directly into the boat and fill the bow section with water.


The next day the wind is still blowing too hard to get Eli into the beach, so we pull the anchor and sail under jib alone down the ten miles of coast to the entrance to Bahía Magdalena. A northbound yacht hails us on the VHF, complaining about the stiff breeze that has spray flying into their cockpit, while we, southbound, enjoy the delights of having the wind behind us. Getting from the southern tip of Baja back to San Diego involves 750 miles of sailing or motoring into the prevailing northwesterly winds, a proposition that is widely considered to be no fun whatsoever. Whenever I see a boat heading north, working so hard to reach a destination of such dubious merit, I am always quietly smug with the knowledge that we’re not going back, at least not that way.


After Alisa finishes talking with the northbound boat we get a great surprise – a hail from Free Spirit. It turnes out that they are anchored in Bahía Magdalena, just a few miles away. We anchor next to them, off of the tiny town of Puerto Magdalena, and have a great time catching up. We're sad to see them pulling the hook and heading south a couple days later, still bound for Central America. But who knows in this new sailing life of ours - our paths may cross again in some unlikely spot.


Bahía Magdalena attracted my attention when I first started looking at Baja maps when we were planning this trip. It’s a huge embayment, blessed with a deep-water entrance, but fringed with biologically productive shoals and mangrove swamps. Magdalena is also one of the bays where gray whales come to calve every winter. Once we arrive, I am ready to slow down and spend as much time as we wanted to. “Where are we going that’s so much better than this?” I ask Alisa. So we while the days away. We each take a turn riding a local panga with other cruisers into San Carlos, the big port on the north end of Bahía Magdalena, we visit with Paul and Ann, we take great walks in the mountains and coastal plains around Bahía Magdalena. Other cruisers come and go, but we are happy just staying and taking care of Eli and getting ashore for a little while each day.


Our propane is running low; one bottle is empty, and we can’t remember when we switched over to the second, so we aren’t sure how long it will last. I try getting the empty bottle filled up in San Carlos, without success. Since we are planning on sailing right by the fleshpots of Cabo San Lucas, we will have to go all the way to La Paz before we can expect to get more. Suddenly, we have a reason to get going, and we do, pulling the hook at noon one day and setting off on the 220 mile trip around the tip of the Baja peninsula. 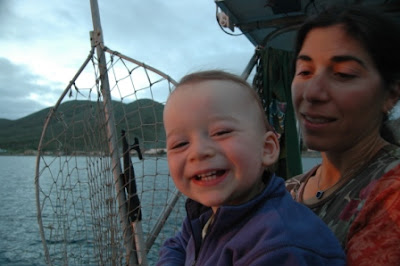 On the hook, Bahía Magdalena. 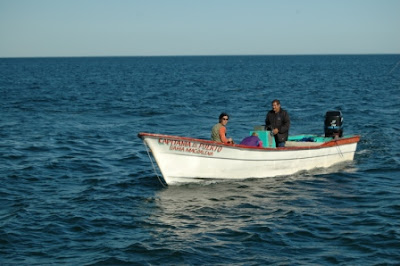 Alisa in the Port Captain's panga. 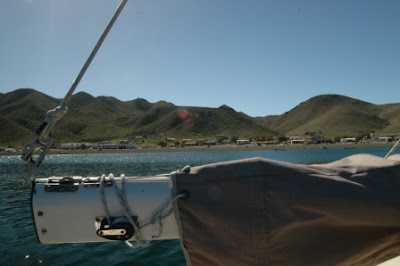 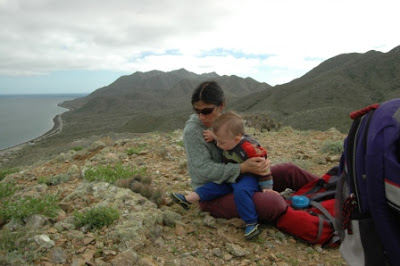 Trying to keep Eli out of the cacti, the hills above Puerto Magdalena. 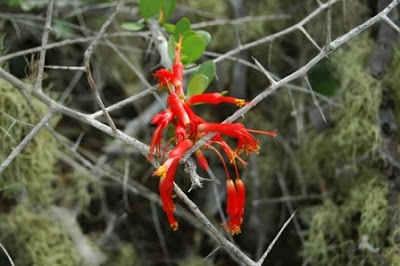 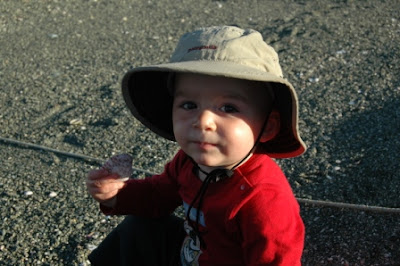 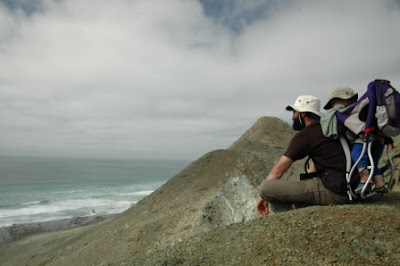 Looking out over the Pacific, the supercargo zonkered. 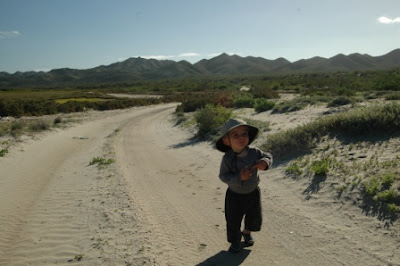 The longest walk of Eli's life, middle of nowhere. 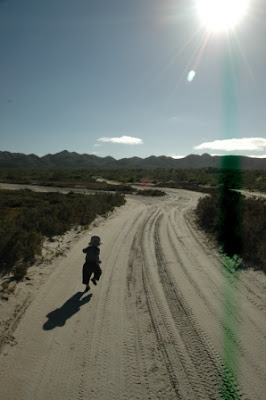 Catch me if you can. 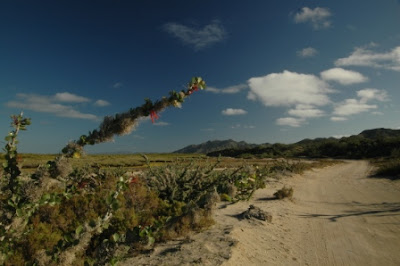 Not every picture needs a caption. 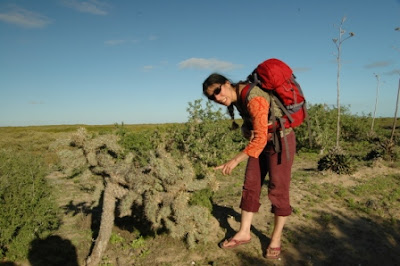 The Rose, with thorns. 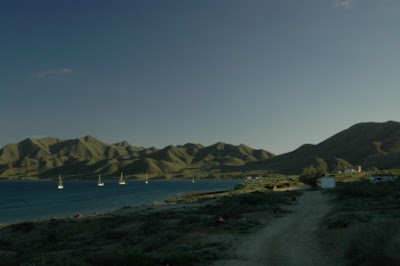 The fleet at Puerto Magdalena.

A few weeks later, our friend Jamie asks us if we had seen scads of little gray whale calves in Bahia Magdalena. The truth was, we hadn’t seen one gray whale. We had heard that it was still a little early in the year for the whales to be arriving, but we never checked it out for ourselves, never left Puerto Magdalena to explore the shallower parts of the bay where the whales congregate. We had a fine visit, and we are always restricted in how much we can do by the fact that we’re involved in intensive parenting every day of the trip. But talking to Jamie, in a restaurant looking out on the malecón in La Paz, I thought of all the great-looking country on the chart of Magdalena Bay that we had never explored, and how we had managed to spend more than a week sitting in one of the two anchorages recommended by our cruising guide without seeing anything else. It was a good lesson, early on, about the hazards of staying on the defined cruising routes, anchoring in the prescribed anchorages, and traveling in the bubble of the society of other people traveling on sailboats, without taking the time to explore the world for ourselves.
Posted by MikeAlisaEliasEric