We arrived in Fiji on September 17th and found ourselves for the first time facing the strict math of getting out of the tropics before the start of cyclone season. In order to be conservative we have long been planning on being in Australia by November 1. But Bundaberg, where we aim to enter Oz, is 1,500 miles from Suva, and we also had to plan on spending some time in New Caledonia on the way. What this all boiled down to is that we only had two weeks in Fiji. After months and months of wandering through the South Pacific mostly at our own pace, we were suddenly on a schedule.

No problem, we thought. We’ll just take care of a few chores in Suva and then identify a completely fantastic locale to visit for a week or so before we start thinking about heading west. We chose Kandavu Island, about fifty miles southeast of Suva. Our Lonely Guide said that Kandavu would be a great place to visit if only you could get there, and even better if only there were anywhere for a tourist to stay once there. For much of this trip we’ve used the Lonely Guide as a tool for deciding where not to go. If a place has a big write-up in the guidebook, with restaurant and accommodation choices organized by price, we figure that’s a place to leave to the unwashed masses who aren’t traveling the South Pacific by yacht. So Kandavu passed that test. Another yacht crew that had visited said it was great. Our bird guide listed tons of interesting species as resident there. And just north of Kandavu is the Great Astrolabe Reef. Just look at that name – Great Astrolabe Reef. Doesn’t that sound like the perfect place to park the yacht, mix up the rum punches, and catch up on your snorkeling?

We thought, Fiji in two weeks? No problem.

What actually happened reminded me of what happened to my mountain climbing career after I got a real job and began trying to squeeze Alaska Range climbs into two week vacations.

We left Suva with a forecast of northeast winds coming around to the southeast the following day. All well and good – since Kandavu is to the southeast of Suva, we would coast down on the northeasterlies and be safely snorkeling the Great Astrolabe Reef before the southeast headwinds came up.

But by the time we motored out of Suva Harbor, the winds were already blowing from the southeast. Blowing hard. Directly from Kandavu.

We were not going to tack back and forth into a near-gale, getting soaked and trying to feed, maintain and entertain a two year old in a world that was tilted over twenty degrees and bashing up and down ten feet every ten seconds.

So we eased the sheets and fell off for our back-up choice, Bengga Island. We figured we’d spend
a few days there and then head down to Kandavu once the weather was better.

This is the view from our anchorage at Bengga: 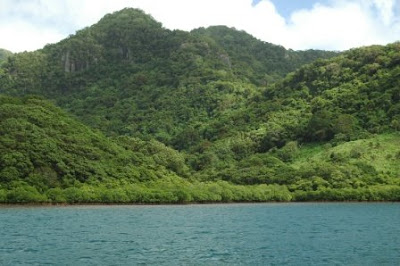 There was a village a little ways down the coast, and we rowed ashore to present sevusevu, the gift of kava root that outsiders traditionally present to a village chief when requesting permission to visit the surrounding area. We were met at the beach by a woman named Elizabeth. She told us the name of the village, and if I could find my notebook I would tell you, too. Everyone was very friendly. I found the chief and presented the sevusevu. Alisa and I then explained to Elizabeth that we were hoping to walk around and look at birds. Our expressed desire was clearly outside of Elizabeth’s experience of visitors to the village. “What kind of birds do you want to see?” she asked. “We have chickens. And pigs.”

We ended up trooping around the village with Elizabeth and her little kids, Alisa and I occasionally pointing our binoculars at birds in the trees. Houses in the village were really just shacks, but they did have the galvanized roofs and cement floors that are the defense against really absolute poverty in a rainforest environment like this one. The houses were clustered around a cement walkway, and as we passed people waved from whatever they were doing inside. The houses were open enough and close enough that people could talk from one to another in a normal voice. Elizabeth’s kids all had thick strings of mucous running from nose to mouth, and they of course all wanted to touch Elias and play with him. It was a very poor place, and gave the sense of being a real backwater, true or not I don’t know, but it felt like a place where people might go their lives without seeing the next village over. We walked around the village with our binoculars and we got a tour of the poverty of the place as much as we saw the local avifauna. And then we got back in the rowboat and retreated to Pelagic. 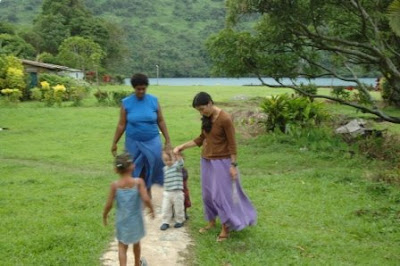 Elizabeth and Alisa and kids. 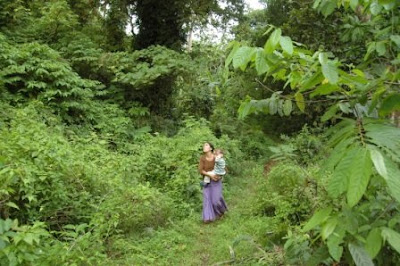 After our visit to the village we stayed on Pelagic for a few days, blowing in circles around the anchor and listening to the rain fall. Elias got sick, his little lungs barking a cough during the night and snot running from his nose. Just as in Uiha, Tonga, where we couldn’t keep Eli from picking up pig turds in the street, we felt that we had crossed over our comfort threshold for travel with a two year old. The clouds fell low enough to be called mist and the days were gray and if I squinted my eyes our surroundings could almost look like some steep-sided lush glacial valley in southeast Alaska. Almost.

Bengga Island is home to a tradition of firewalking, a tradition that is now restricted to performances at a resort on the other side of the island. We have managed to avoid resort demonstrations of “traditional culture” all the way across the South Pacific. But when Monday rolled around, which was firewalking day at the resort, it was also our seventh wedding anniversary. So who could resist? We prepared to pick the hook and head over for a cook’s night out.

But then someone (the cook) had a Human Moment while trying to switch the battery from battery #2 to battery #1 and switched through OFF instead of through BOTH. This is a feature of our electrical system that British sailing magazines call “fail dangerous”; if you switch to OFF while the engine is running, even for a teeny moment, the alternator blows up.

So the alternator blew up.

And we spent the next hour swapping out alternators, and we had noodles and white wine on board Pelagic for our anniversary meal. And we listened to the rain fall. And the next day we gave up waiting for the weather to improve and sailed back to Suva.

In Suva we checked out of the country. Then we sailed overnight to the Mamanutha Islands, in western Fiji. Here there is a resort on every small island and several resorts on every big island. We anchored in front of a sleepy little resort where there were six paying guests and we were the only yacht. The staff was preparing for the arrival of three hundred guests from New Zealand in a few weeks but in the mean time they had plenty of time for us. Every man with a paintbrush in hand, sprucing things up for the big influx, had time to say hello and ask where we were from. This was a big change from Tonga, where we found people to be much more cautiously friendly. It gave us our one little insight into what a great place Fiji might be to visit, and how much more time we could profitably spend there. For a few days we looked at birds on the beach and snorkeled among great fish schools in bad visibility, and the weather continued to be stormy and gray and rainy. And then we left for New Caledonia. 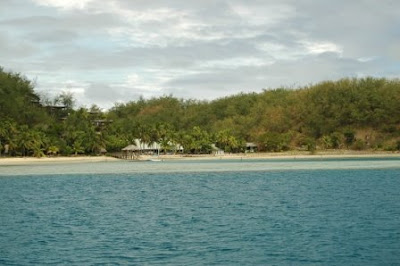 The resort on Malolo Island.

For months we approached the South Pacific with ease and languor – 42 days to visit two islands in the Marquesas, three weeks to visit two islands in the Tuamotus. Arriving without any immediate plans to leave, we found the islands and people and reefs opening before us, taking us in and showing us more and more of this distant part of the world. Fiji was our first taste of a different kind of cruising, the kind that is often the fate of those people who are sailing all the way around the world in two or three years or who are sailing the world in a pre-scheduled group, as has become popular. We had time to see the capitol city, and to take care of the chores that had to be taken care of, and no time to wait out a spell of bad weather that kept us from experiencing the tropical ease of the country. So from Fiji we remember a particular smile at that last resort, and a cab ride to a curry house in Suva, and little else.

But who knows – we may be back.