21 December 2008: Happy Solstice from Down Under

Since our arrival in Australia two months ago, there have been a few things for me to get used to. Southerly winds are cold, not warm. Christmas is no longer white with winter snow but instead is full of bright blazing sunlight. And along those lines, the December solstice is the longest day of summer, not winter. I vividly recall the first three winter solstices I spent in Fairbanks; they were a token of strength and endurance for me. I would not fly to the lower 48 to see family for Christmas until the day following solstice, as being there on the darkest day marked that the hardest day of the year was past and it was important for me to experience it. I can remember sitting in my cabin and in just three hours watching the sun rise low on the eastern horizon and slink into sunset before my eyes as my rocking chair kept time. Those winter solstices in Fairbanks were bright with moonlight on snow and the hail bop comet burning in the sky amidst northern lights. It was a gorgeous frosty experience and I would throw back my parka hood and eagerly anticipate the return of the warmth that comes from the sun. Those days are long past, and now I am faced with a December solstice that is less sensational. It is so strange to come straight from the beach, sand in my hair, and walk into the supermarket to the sound of Christmas carols. The lack of winter makes the holiday season feel flat and oddly misplaced. My holiday traditions of baking and cooking huge feasts with lots of butter will not be repeated in Australia. We celebrated Thanksgiving by having a day at the beach and then a grand BBQ of lamb and kangaroo kabobs, a new tradition. I wonder what new traditions will surface for Christmas…right now I think it will be a lazy Christmas for the crew of Pelagic, with a long day at the beach enjoying the surf and sand. Hey, maybe I’ll get used to this, afterall.

Another mental hurdle for me has been the use of the English language. I’m not talking about the (now) obvious ‘thongs’ for ‘flip flops’ or ‘ute’ for ‘truck’. I’m talking about me being at Mike’s Uncle’s house, trying in vain to control Elias who is running everywhere. Mike’s Auntie and Uncle must have said to me a dozen times ‘don’t panic, don’t panic, he’s fine’, and I kept thinking “I’m not panicked. why do they keep telling me not to panic. my voice is calm and even. this is not panic, they should see me panic”. In the car driving home it dawned on me that ‘don’t panic’ translates to ‘don’t worry’. Similarly, ‘no drama’ really caught me off guard. The first time Mike’s cousin told me ‘no drama’ I had been explaning when we might be able to join them for dinner. I immediately thought ‘do I sound dramatic? do I sound frantic or overwhelmed? why did he say no drama? I can be dramatic, and this is NOT dramatic”. I felt much better when later in the evening Roy said ‘ah, yeah, no drama Mate’ to Mike. Best I can tell, it is an innocent saying that translates roughly to ‘no worries’. Of course ‘no worries’ means ‘you are welcome’ and can also be confusing at times. But the longer I am here the more I realize that the Australians all seem to have hearts of gold and if they are guilty of anything it’s of being too lackadaisical with the English language. Maybe it comes from growing up in the beach culture. Maybe it comes from celebrating Christmas in a bikini and seeing Santa in his togs.
In Oz, Santa uses kangaroos to pull his sled which gives the caribou more time to rest for their turn in the northern hemisphere. Here are a few pictures of Elias and his cousin Kali making sure the ‘roos are well fed and energized for the work that awaits them on Christmas eve. 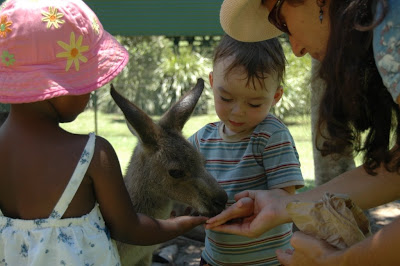 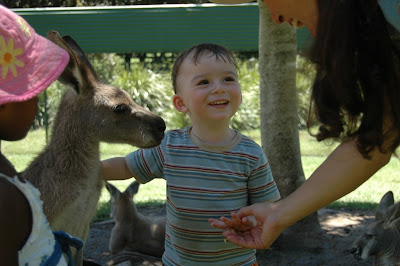