One of the recurring themes of our travels is what a bubble we sometimes operate in on board Galactic.  When we're out on the water or anchored up in some lonely cove, we're separated from whatever country we're visiting.  We live in a little microcosm of America, and aren't forced to interact with people from the country we're in.

Even when we're spending time in a town, as we are now, we still tend to be insulated from the host country by the company of other traveling boats.  We easily interact with other sailors, with whom we share a common life of the sea, and who usually speak English quite well.

There are some great aspects to this separation that comes from living in on our own world on the boat.  It makes long-term travel with the family possible.  But there are downsides.  We've been in Chile since last Christmas, and the boys still speak no Spanish.

But!  We Galactics are rarely ones to shy from a good travel interaction.  One of our goals for this time in Puerto Williams is to get the boys interacting in Spanish.  And things are starting to happen along those lines.

We had the great good fortune to meet Carlos Vega, who runs an eco-tourism/trekking business here in Puerto Williams.  He's been coming by the boat every morning this week to give Elias a one-on-one Spanish lesson, and, not incidentally, some concentrated Spanish conversation for me.  Magic doesn't happen in a week, but we're getting Elias started.

And, the local sailing school here has given the boys a chance to interact with local kids.  Elias has been twice and Eric once.  When the weather is bad, as it can be here, sailing school consists of watching sailing videos inside and eating some junk food.  Both boys left us looking quite unsure of themselves on the first day, and came back transfixed with joy.

In our so-tight nuclear family lifestyle, independent interactions for the boys are much less common than they would be on land.  It was a pleasure for Alisa and me to watch the boys sailing out from the safe harbor of family life and coming back with big grins over the state of things in the world outside. 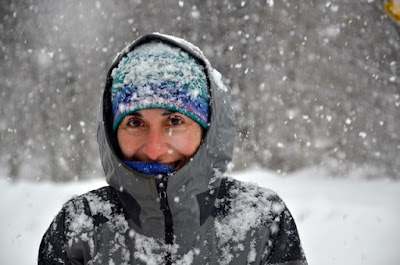