I suppose that it's inevitable that we would find ourselves leaving Puerto Williams, and Chile, with a few things undone.

I had really meant to take a picture of the family in front of the Yelcho, the boat that rescued the crew of the Endurance from Elephant Island - the bow of the Yelcho is set up as a sort of monument in Puerto Williams.  Never got around to it.

Likewise, Alisa had meant to make empanadas with Francis and Mauro (in pics above and below) before we left.  We almost made that one, but then the right weather for leaving put us in final departure mode and we had to cancel. 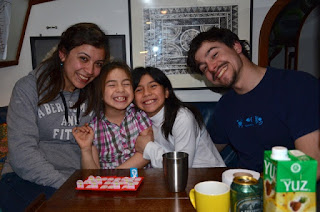 I meant, too, to write at some point about some of the social nights at the Micalvi.  The bar is closed, but the ship is still open to sailors for socializing, and we had some great nights there, rubbing elbows with sailors from a great swath of nations who were all united in some vision of the same quest that had brought us all to that point.

Those get-togethers were a phenomenon of the winter.  When summer came around people started to come through on a quick schedule, and the social cohesion of the scene disappeared.

I never got around to taking a picture of the Alaskan flag that we left, either.  Elias and I put the flag, with our name and home port on it, up on the wall of the Micalvi on our very last day there.  It joined a host of strangers' flags, and a couple flags with familiar names (below).

If you stop by the Micalvi, make sure that it's still hanging there for us.  It's the only Alaskan flag, and in our haste we could only find three tacks for hanging it on the wall. 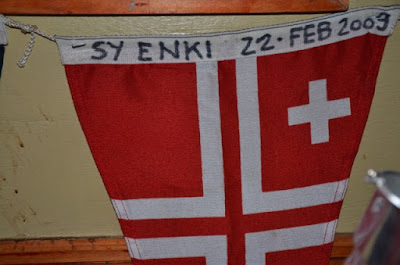