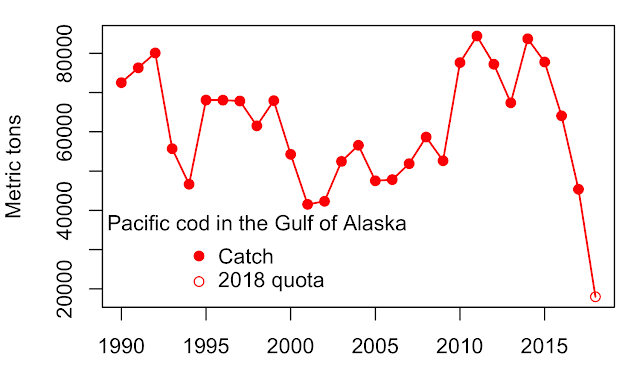 This is a big deal in Kodiak.

The Pacific cod stock in the Gulf of Alaska, which supports a very important fishery, appears to more or less have collapsed. The quota is down 80% for next year.

One of the big causes of the collapse appears to be the failure of young fish to survive to adulthood. The reasons for this failure are an active area of research, by myself among many others. But the leading hypotheses at this point focus on the 2014-2017 marine heatwave. During that time, large areas of the North Pacific were warmer than had ever been observed before.

Every year, a group of scientists from the NOAA agency in America evaluates the role that climate change played in extreme climate events.

The latest report just came out. And for the first time, that group has found that some extreme events meet the strictest standards for attribution to human causes changes. Basically, there were three events in 2016 that were so extreme that they were, practically speaking, impossible in the pre-industrial climate. And one of those three events was the marine heatwave in the Gulf.

I think this is very big news for Alaska. The conditions that we're experiencing have blasted through to a state that is uniquely human-created. The livelihoods of a number of my fellow Kodiakers are being affected in as direct a way as you could imagine. So what will our collective response be?

In Australia, where I did my PhD, science denialism is much less established than in the US. As a result, adaptation to climate change is big part of the public discussion in Australia.

In the US, though, denialism is much more important, and adaptation isn't part of the political discourse at all. I'm not a sociologist, but I think this has tremendously interesting implications for that old trope about big parts of the US electorate acting against their own self-interest. Presumably farmers in the US would be up in arms about climate change? My impression is that this isn't the case.

Similarly with fishermen in Alaska. I know there is a strong conservation strain in the commercial fishing community in Alaska. But quite a number of my fishing friends are actually ex-fishermen at this point, so I don't have a real feel for the pulse of that community.

Commercial fishing is a big enough part of the Alaskan economy that fishermen speaking with a coordinated voice on any issue could wield tremendous political influence in our little state.

But, there are always the immediate problems that anyone has to deal with that inevitably dominate fishermen's attention, just like anyone else's. And the disconnect between action and payoff on slowing climate change is a big negative when any individual is considering how they might allocate their limited time and energy.

But, with the heatwave and Pacific cod, climate change has apparently become an immediate problem. I can tell you with great authority that fisheries scientists can't predict what the next climate-related surprise will be in Alaskan fisheries. But we do know with quite a bit of confidence that more surprises will be coming over future decades, and coming more and more often.

Some kind of coordinated adaptation effort, I imagine, will start to come together in coastal Alaska as a result.
Posted by Mike