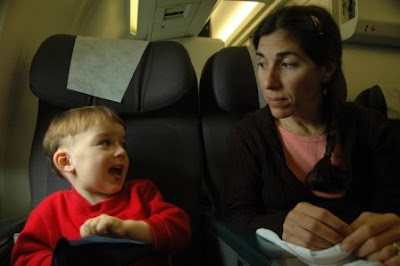 We used frequent flyer tickets to get from Oz to the States, which meant that we had a less than ideal itinerary: Brisbane-Auckland-L.A.-Washington Dulles-Cleveland. Thirty-six hours from first take-off to final landing. So of course we were wondering how the One of Us Who Is Two would handle it all.

Well, he handled it great. Slept a lot, ate his airplane meals more or less competently, got a big kick out of putting his hands over his ears when we flushed the airplane toilets.

The problem came when we were off the plane.

We put him to sleep at 8 the first night in Cleveland, then went to sleep ourselves at midnight. At midnight-thirty Elias sat up and announced, "I'm all done sleeping!". No amount of cajoling or soothing would get him to give up his insistence that he was ready to play. So he got up that night and played, and ate a full meal at 2 am, and finally went back to sleep at 3:30.

The next night, the same.

The night after that, the same.

It turns out that the mental effort that adults expend to get over jet lag just doesn't work for little people. They stay on their old schedule until their bodies get tired of it. Alisa and I, meantime, would find ourselves beginning each of these night time sessions exhausted and willing the little fellow to sleep, but as the wee hours ground on his jet lag would become infectious, and we'd soon be wide awake ourselves.

After four nights Elias was getting over it. But then we went to Alaska, and when we came back to Ohio we were again four hours off of schedule. The first night back, I just gave in and watched TV with Elias until 1:30 in the morning... 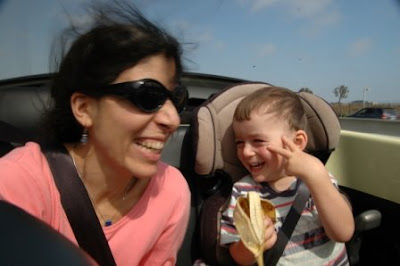 Alisa and Elias in Aunt Noe's convertible during our 8-hour layover in L.A.