On our Pacific crossing we got well used to the occasional windfalls that trolling lures behind Pelagic gave us - tuna and mahi mahi became regular, though unpredictable, staples of our diet.

But when we reached Australia things changed.

We've dragged lures up and down half of the east coast of Oz, with exactly one bite - something that broke our line off the Gold Coast almost a year ago. And because we've been generally unimpressed by the fish and prawns available in the fishermen's co-ops along the coast (Alaskans can be terrible seafood snobs), fish has largely disappeared from our diets.

But, on our sail into Townsville, things changed.

Instead of the southeast trades, we found northwesterlies that made the few anchorages along this stretch of coast unusable, and kept us tacking back and forth at sea all day and all night. We passed a humpback whale cow and calf that wouldn't stop breaching and slapping the water with their pectoral fins. We passed flocks of pied imperial pigeons, striking black and white birds, flying over the water on their migration from south from New Guinea. And we caught this: 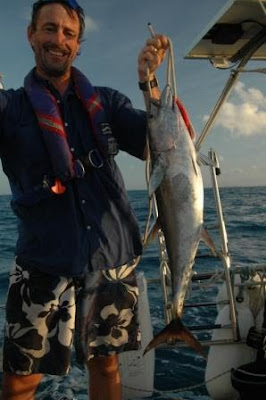 Tuna for dinner.
The last fish we "caught" from the boat was the shark that bit our windvane three times, and our rudder once, 170 miles from the Queensland coast on our passage from New Caledonia.
It looks like the drought is over.
Posted by MikeAlisaEliasEric