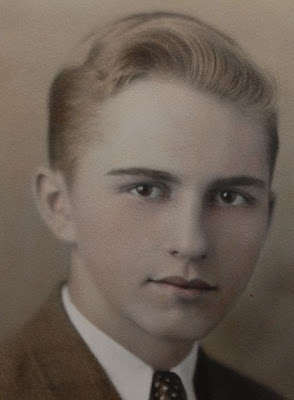 My mother’s father was born in 1915.  This picture of him was taken some time in the 1930s.  It’s a hand-tinted black and white print.  And this is him last week: 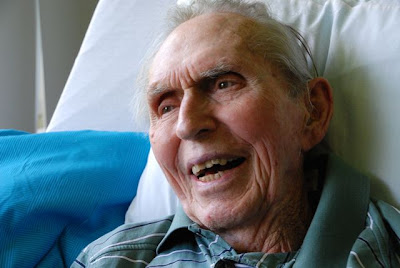 A week before this picture was taken he came very close to dying.
-Just think about whether you want to see him again, Alisa said.  I’ll be fine here.
For a few days I called back to the States to get updates on his condition and then I booked a ticket from Hobart to Cleveland with 20 hours advance notice.  I chopped enough kindling to last for a week and I left Alisa to look after Elias and Eric.
Once I was back in the States I spent most of my time in the nursing home, giving a short break to my parents who have been providing end of life care to my mom's parents for years.
My grandfather was very tired.  But he talked for hours.  I let the conversation build and drift at his pace.  He was very sharp, very much the same person who I've known for my whole life.  I enjoyed the easy companionship of this man who I know as well I possibly could, someone who is mysterious to me in very few ways.
-It’s a good life, he told me.  And I say it is a good life, not it has been a good life.  Even with my troubles in the last few years, it’s a good life.
-And later: I want to live life.  I want to go right up to life and touch it and see it.  And I don’t want these people [at the nursing home] telling me don’t do this and you have to do that.
He told me the hunting stories that I have known all my life, stories that have grown comfortable through repeated retelling, like old leather gloves that have molded to the shape of your hands.  For hours he told me stories about people in our family who I never knew.  One night my sister and I drank beers in his room and he told us stories all the way until eleven o’clock.
-You can ask me anything you want, he said.  I’ll try to answer you.
The next day I asked his advice about raising children and he told me what he knew.  He told me about the mistakes that he still bitterly regretted, a half century after the fact.
After a week I said goodbye.  When someone is 94 years old you have already gotten used to the idea that their life is nearly over.  So saying goodbye this time was not overwhelming in the 'I'll never see you again' sort of way.  But the chance to stand in the courtyard of the nursing home and hug him and to look in his eyes while he was completely coherent and present and very much still himself was a pleasure that I will remember for a very long time.
Posted by MikeAlisaEliasEric