Well, it's true: no Australian has ever set foot on the moon, nor are they showing any signs of getting there soon.

But there are some things this nation does very well, thank you very much.

Eric's birth was our first in-depth interaction with the public health system here.  And we have been very impressed by the care that Alisa and Eric received, in particular by all the "extras".  In the hospital, Alisa got a visit from a physiotherapist to get her started on recovering from the birth, and a lactation consultant came by to fine tune Eric's latch-on.  And after we left the hospital, we received three home visits from nurses and midwives to make sure that everything was going well.  These weren't fly-by visits, either; the first nurse visit lasted two hours.  We didn't pay for these home visits, nor will Alisa pay for her post-partum physiotherapy/exercise classes.  Nor, for that matter, did we pay the hospital for the delivery.  There's no monetary profit generated by any of that stuff.  It's just part of a public health system that is available to all infants and moms in Tasmania.

I'm sure that no one in the US wants to hear about health care policy at this point.  But I will note in passing that the UN lists Australia, with its none-too-healthy general population (fatty diets, lots of smoking and drinking), as number 17 in a worldwide ranking of infant mortality rates, which puts it firmly in the middle of the pack of western nations.  The US, meanwhile, comes in at number 37, right behind New Caledonia, Brunei and Cuba.

So, when I want to play Aussie jingoist, I'll say to all our kith and kin back in North America - "Keep trying, you Yanks!  Someday you can have standards of public health every bit as good as the western world's!" 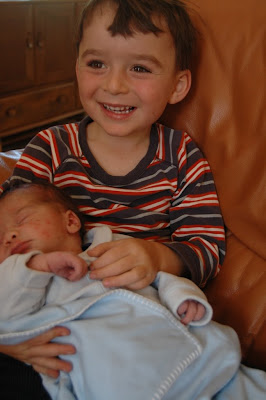