"I guess it couldn't hurt to ask?" I said to Alisa.  The boys were asleep, we were in bed, and I had the laptop balanced on my knees.  Before we started looking for our next boat, I never took the laptop to bed.

"No, it couldn't hurt," she answered.

So I left a message on the webpage of the builder of the hottest thing on the seven seas - the Boreal 44.  This is a new production yacht designed specifically for high latitude sailing and, significantly, the company was started by two long-term cruisers.  So there is a lot that we like about the design.  But the company hasn't been around long enough for used versions to be on the market, and we knew that a new boat would be way outside our budget.  But still, it couldn't hurt to ask.

The next day a very nice note from one of the company's founders arrived, along with the answer to my question - base price 308,000 euros, without even getting into necessities like a windvane.

Now, I know that in the range of possible problems to have in life, the travails involved in finding your next yacht don't count for much, might in fact be the kind of problem that about 99.5% of the world's population would dearly love to have.

It's just that I'm realising that we really are going back to square one - searching out a reasonable boat on a tight budget, getting her ready to the point where chronic-worrier me feels ready to take her to sea with All I Hold Dear In the World on board.  Meanwhile, Pelagic is apparently setting a modern-era record for being stuck in customs limbo (more than five months!) as we try to import her to Australia, and so is still not on the market, and until we sell one boat and buy another we are looking at dragging our kids through a period of short-term housing gigs.  (I can already hear Elias trying to exploit the nurturing side of girls at college with the stories of how he never had a permanent home when he was growing up.)

But we are, of course, holding onto the long view.  Eric is only 2 months old.  We'll be patient in our boat search, and choose wisely, so that we don't have to go through another boat swap any time soon.

And, meanwhile, we can easily lose ourselves in the quotidian delights of family life - like setting Elias loose on the bike that his grandparents bought him, and watching the purest state of joy that results.  If only the next boat would make us so happy! 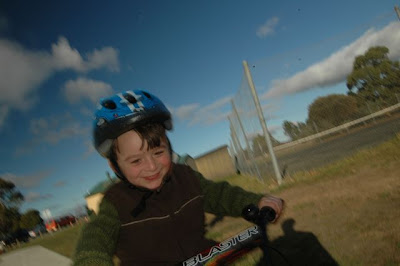 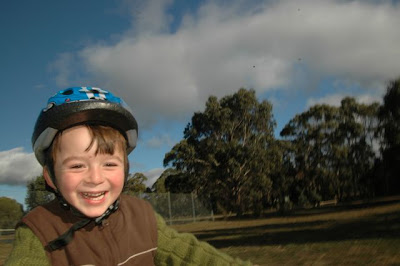