The crew is concerned with citizenship lately.  We on team Pelagic are firm believers in having two passports each, since you never know when one nation or another might let you down.  (Joke.  Sort of.)

Yesterday Alisa checked into the necessary steps for parlaying her permanent resident visa into Australian citizenship.  We've long known that Oz inconveniently doubled the required length of residency for new citizens just before her visa was granted, and she was calling to find out about allowable waivers to the current four-year requirement.  Stay tuned.

Meanwhile Eric, who already has his Aussie passport, has an appointment at the U.S. consulate in Melbourne for early next month to be registered as a Yank.  Alisa will fly up with him for the day while Elias and I keep things going here, so I had to sign an affidavit giving my consent for him to obtain a U.S. passport.  And that affidavit gave us a great interaction with a nearly bygone world of trans-border paper shuffling. 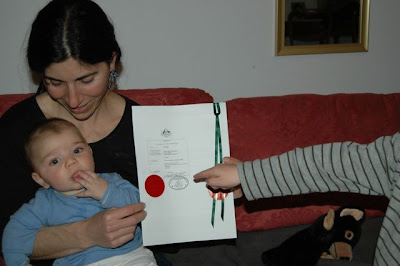 First I had to have the affidavit notarized, which is a bit of a production in Oz - you can't get it done at a 7-11, the way you can in the U.S.  And then I had to get an apostille,  which is French for "you give me 80 bucks and I give you this nifty green ribbon."

That's the apostille above - certification of the notarization by the Australian government for use by a foreign power.  It did cost 80 Australian dollars, which lately is about $77 in real money.  But for that price I figure we got a great look at a nearly-vanished world, the world of official seals and Ribbons that Mean Something and ink-stained clerks laboring at high desks.

And what a treat it will be to recount this tale to Eric twenty years from now:  "I had to sign a piece of paper, with a pen.  Then I took it to one office to get it certified as authentic.  Then I took it to a second office, where they certified the certification that I got at the first office.  Then mom got on a plane with you and flew to a whole other city, where she surrendered the piece of paper.  And then the people in that office sent the piece of paper to a different country.  That's how things were done back then."

I reckon that's one of the joys of this fast-changin' modern world: the chance to savor a situation as anachronistic, even as you're living it. 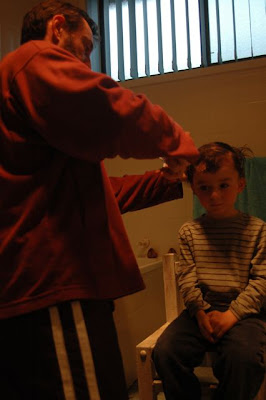 Elias getting a haircut yesterday.  "How do you want it cut?"  I asked.  "Like yours," he answered.
Posted by MikeAlisaEliasEric

Email ThisBlogThis!Share to TwitterShare to FacebookShare to Pinterest
Labels: travel