As every aficionado of South Pacific sailing knows, it was a transit of Venus that brought James Cook to Tahiti in 1769.  His expedition successfully measured the time it took Venus to pass across the face of the sun, and thereby contributed to the global effort to calculate the size of the solar system.  (It's so easy to imagine the response of climate science deniers, had they had been around then: "How could you possibly measure such a big thing as the solar system by timing that little dot in front of the sun?  How can you know that little dot is really Venus?"  And on and on.  But I digress...)

So, Cook successfully observed the transit of Venus.  And, perhaps more importantly, he brought back the stories that begat the Western perception of Polynesia as a slice of paradise on earth, a perception that all these centuries later can still motivate otherwise responsible people to sell their houses and start traveling the world in inconveniently slow sailboats.

Transits of Venus occur in pairs, eight years apart, with more than a century between pairs.  Before the transit that occurred in 2004, there was not a person alive who had seen the phenomenon.  The next transit of Venus is coming up in June of 2012, and if you miss that one you'll have to wait until 2117 for your next chance.

If you were in the southwest Pacific, looking to buy your next world-girdling sailboat, how could you not take the opportunity to voyage to Tahiti and observe the transit from Point Venus, the very spot where Cook did the same?

I can a Family Quest coming to life.

We just need to find that sailboat. 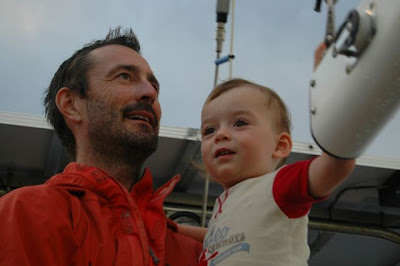 Making a dawn landfall at Tahiti, 2008.  We both looked younger then. 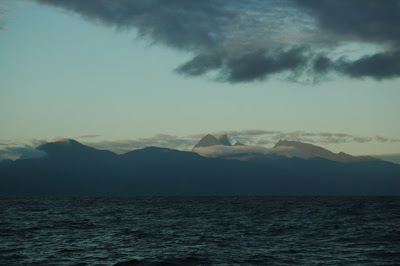 The north shore of Tahiti.
Posted by MikeAlisaEliasEric