Here's the before and the after.
In Alameda, California: 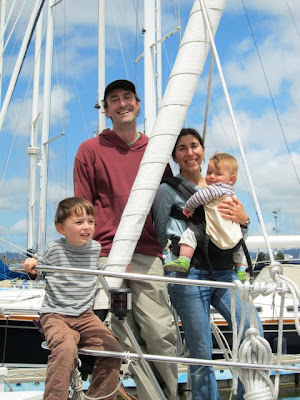 And, seven months later or so, in Bundaberg, Queensland: 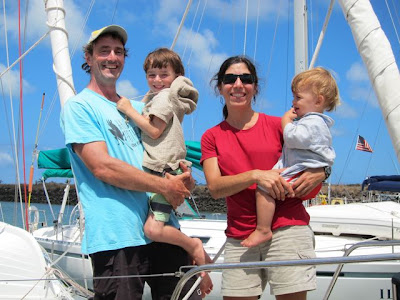 Quite a bit of living (and sailing!) went on between those two photos.

You often hear that circumnavigators find themselves adrift when they finally make it home and their long-sought goal has been reached.  I'll admit to feeling a little bit of that here in Iluka.  There's the sudden loss of focus - whatever else sailing a strange boat across an ocean with your two little boys may do, it certainly makes you focus.  We had a lot of fun on the crossing, but there were also many days, from the start of boat prep in February to the final passage a couple weeks ago, when Alisa and I were flat out, all day, to serve out twin masters of Family Responsibility and Safe Navigation.  Now one of those masters is suddenly gone.  Galactic bobs happily at anchor day after day, with no immediate need for my attention - no gybing, no plotting, no tweaks to the windvane required.  I find myself awake at odd times through the night, failing to sleep through the hours when I used to do these things.

And then there are the after effects from the effort that it took to get here only eight months after the purchase of the boat.  Alisa and I agree that it was almost too much to take on.  Eight months ago we had a Grand Plan confidently plotted out, something that would keep us busy sailing this boat for years and years to come.  But now we agree that we'll be happy to sail to New Zealand next year, and that there's little point in thinking beyond that.  We know something that we didn't know before, or had forgotten - someday the well of our effort will run dry.

I guess that's not too big a sense of transition for the end of such a big trip!

Meanwhile, it's been a joy to see how easily Elias has slid back into Iluka life.  With some mates to play with every day and lots of space to run, his tantrums have nearly disappeared. 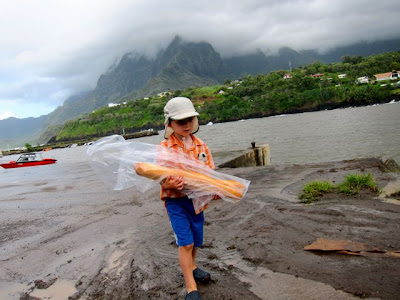 (Not Iluka!)
Posted by MikeAlisaEliasEric