So, in my last post, I made noise about how we were forcing ourselves to postpone our experience of Chile so that we could take care of all things boat and get ready for months of independence in los canales.

But you just can't keep a good travel experience down.

Alisa, I should tell you, lost a filling around day 10 of our passage here.  So a visit to the dentist was high on the list when we arrived in Valdivia.  And at the dentist's office she met a very nice couple who braved the language barrier to chat her up.  They ended up giving Alisa and Elias a ride home, and she brought them aboard for a quick visit, and bang, they invited us to their house for an asado.

Well.  Their son-in-law dropped by a few days later to confirm the plans.  And then he let drop that his father-in-law, Jaime Elias (that's him above with our Elias and Alisa) was riding in el rodeo.  And would we like to come watch?

So we were plucked out of a regular day on the boat to the scene that you see here.  The "cowboys" are huasos.  Their ponchos are mantas, their hats chupallas.  The action is very different from the North American rodeo.  Pairs of huasos herd a steer around a small area in the arena - the medialuna - and then around the larger arena, where they pin the steers against the fence with their horses, earning points for the decisiveness of the feat as well as for the point of the steer's body that is pinned.

I'm very cognizant of the fact that whatever I post about Chile is about 1000 times more likely to be read by Chileans than, say, anything that I wrote about French Polynesia was likely to be read by a Polynesian.  So I will beg the indulgence of any Chilean readers for the mistakes of fact and interpretation that I am bound to make.

That said, I was mesmerized from first moment.  The whole scene was so overtly Chilean, and also, to my eyes, such a display of a Hispanic ideal of masculine beauty.  In the picture above you'll notice Jaime's clothes for riding in el rodeo - that looks to me like a tailored suit beneath his manta.  Los huasos were so restrained in the saddle - for all the incredible speed and violent exertion of the minutes that they are engaged in el rodeo, the only expressions of emotion that you see are of men crossing themselves before their steer is released.

After the competition was over, though, their was great affection and respect among the finalists - warm hugs and handshakes between men on horseback.  And then, the crowning moment - the first, second and third place pairs of huasos take turns dancing the cueca with two chinas - the queen (and runner up) of el rodeo.

There can be no rodeo without a queen.  And, American readers, I defy you to imagine the winner of an American rodeo dancing while the crowd looks on admiringly.

Finally, I'll note that several Chileans to whom I've recounted our experience have been quick to say that they don't care for rodeo.  Their concerns center on humane considerations.  But I also suspect that, without being overtly political, the rodeo is a good predictor of someone's politics.  If you like it, I'm guessing that you are likely to be right of center, and if you don't, I suspect you are on the left.

It strikes me that it's just like high school football in the US - I can predict your politics pretty well if I know if the risk of brain injury would be enough for you to keep your kid from playing... 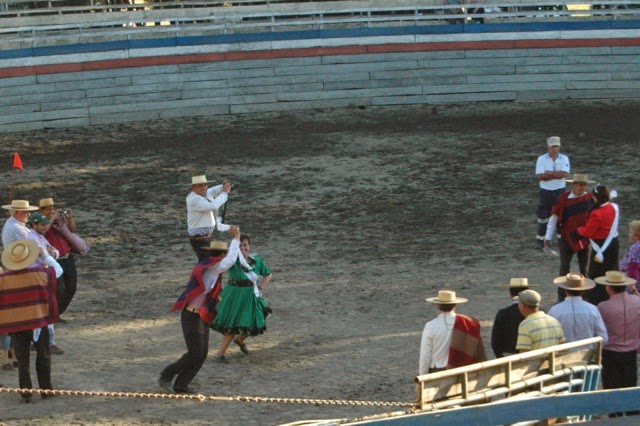