Well, that's what you get when you get up on your hind legs and pontificate about what does and does not count as proper style, sailing-wise.

Or, as Alisa put it, "We chose this weather?"

The plan was to get to Bocas del Toro, about 150 miles away to the west of us, close to the border with Costa Rica. We could spend a week or two based there, and with any luck get up to the mountains at Boquete, and then make it back to Colon for our date with the Canal.

What could be simpler?

And, the weather forecast showed that we would get the last good sailing conditions before a prolonged spell of calm settled in. Of course, we would get caught by a front before we got there, and then would face 10 knot headwinds for the last 30 miles or so, but hey! We're Cape Horners and stuff. We're allowed to spit to windward! Not a problem.

So we set out in the morning, all fired up for an overnight sail and the promise of some natural history delights in a new corner of Panama.

The sail started off as a ripper. Eight knots, and not even trying.

We passed through the ship anchorage off Colon in the daylight, just as neat as could be.

And then, in the middle of the night, we got caught by the front.

I was awoken by an awful commotion on deck and stuck my head through the companionway to see Alisa in the act of being bedrenched by the mother of all tropical downpours, trying desperately to furl the jib, which was making a sound like coconuts hitting a sheet of galvanized tin.

Recognizing the better part of valor when I saw it, I limited my assistance to tailing the furling line from the shelter of the dodger and making encouraging remarks about how she could handle the situation better next time.

After the jib was furled and Alisa toweled off, it somehow transpired that it was my turn to go on watch.

The hours between 0200 and 0600 passed in the most perplexing sailing that I can remember. No matter what I did, I couldn't seem to tack the barky through less than 170 degrees.

The wind was blowing about 20, dead from Bocas del Toro towards us. I had her reefed down, and first I sailed due north, and then I came about and sailed due south. The wind shifted, I reacted. It rained, I hid under the dodger.

And as the hours passed, we got exactly no closer to our destination. In addition to the wind, it was obvious that we were bucking a pretty serious current.

When Alisa awoke and the light of day was on us, I gave up and fired up the donk.

I gave her revs, I strapped in the reefed main, I boldly pointed the bow more or less where we wanted to go, and...

...same thing. First we went due north, then due south. And to the west we went not at all.

By noon, our patience was nil. The engine had been going at hard revs for hours. The forecast showed the same front sitting over us for the next day. And we were still working hard to get exactly nowhere.

And so, with enough angst and gnashing of the teeth on my part that I would blush to tell you about it, we made the decision to turn around and head back to Portobelo, from whence we had come.

For the first three hours we flew. Eight knots, not even trying.

And then we ran out of wind. And we were given the most arresting show of strange wave morphology, as the two opposing swells met each other and sent fountains of water shooting straight up into the air. It was a great illustration of just what a powerful swirl of current we had managed to land ourselves in.

And then, the wind came up, and we sailed back...straight into headwinds for the last 80 miles or so.

After about 46 hours under weigh, we dropped the anchor right back in the same full-ish harbor that I had been so eager to leave behind.

In retrospect, we obviously forget a long-ago learned lesson about how poorly the forecast models capture fronts, and how easily they can give you 20 knot headwinds instead of 10.

And, we forgot the advice of friends who had done the same trip a week or so earlier, and warned us about how hard the adverse current had made the trip, even though they had no wind at all.

But, more than anything else, it was yet another reminder of how humbling it can be, trying to get yourself from one place to another on a boat, even in the very benign arena of the tropics.

There are times in this life afloat when questions of "style" don't seem so immediate, and your only concern is to do what you set out to do without making a complete mess of things.

On the bright side, the tooth fairy managed to find us on the first night out, even with all the pointless sailing around that we were doing.

And this Portobelo that I had been so happy to leave behind...it doesn't look so bad now, at all. 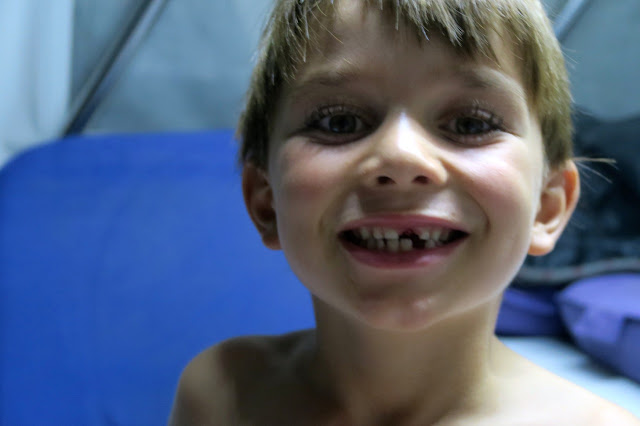