We're through.
All is right with the world. Or at least with our world.

Galactic is bobbing once again on the Pacific, our home ocean.

And the Pacific immediately feels more oceanic than the Caribbean. There are goodly tides here, and upwelling, which brings a salty sort of chill to the water and a frantic energy to the biology. Pelicans plunge diving. That sort of thing.

With the benefit of my vast experience of one Canal transit, I'll suggest a few pointers for a happy experience.

First, put fenders all over your boat. This is not a time to look cool. When you think about how many fenders you need, don't think about everything going right. Think about something going wrong. We had 14 fenders out as our baseline state, and four more in reserve.

Second, listen to your transit advisor. They are experienced in the ways of the Canal, they know what's going on, and the best thing you can do is to do what they tell you.

Third, know when you shouldn't listen to your advisor. I've heard a few yachties referring to the advisors as pilots, but they are not pilots. A pilot takes over both control of a vessel, and responsibility for the vessel, from the master. When you're transiting with an advisor, you're still acting as the captain of your vessel. If an advisor is careless or mistaken, you have to speak up for your own interests, respectfully and firmly.

Fourth, treat the people on your boat as honored guests. A transit requires a captain, four line handlers, and an advisor to be on board. Alisa was one of our line handlers, so we had four people on board beyond the normal ship's company. These people are key to the success of your transit, and so treating them well, beyond being a simple observation of the iron-bound law of shipboard hospitality, is also an obvious way to look after your own interests.

We were particularly fortunate with our line handlers.

Things weren't looking great just a couple days before the transit. The Brazilian yachties we had lined up flew back to Brazil for a visit and accidentally left their yellow fever vaccination certificates on their boat in Panama. Net result - they couldn't get back into Panama to help us transit.

Our new yachtie friend Denise (is there any other kind?) on Sold the Farm, who had already been through once, kindly stepped up to offer her help. We had an expat from Panama City lined up as the second, but we were still one short.

Into the breach stepped Emma and Jude, 14- and 19-year old sisters who are living aboard their family catamaran, Tanda Malaika, in the Shelter Bay marina in Colon and had already done six transits apiece.

Their parents' rule was that they could only line handle as a team. So, long story short, the expat bowed out (thanks anyway, Doug), and we signed on the two girls.

All three of these line handlers were exactly what you would want - salty around boats, and with previous experience in the Canal. They were pleasant company in the tight confines of a family yacht, and they looked around for things that needed doing. I reckon they went a long way towards making the transit smooth, and making me look good.

And, incidentally, there was a lot of talk with other yachties beforehand about whether we really needed four line handlers, since we were almost certain to be rafted with other vessels and thus wouldn't be taking four lines to the Canal walls ourselves.

Well. First of all, we saw how things are always in flux during a transit, and there's every chance that a change of plans could have left us locking through alone.

And second, even if you're just rafting up to other boats, which is all that we did to get through, having lots of extra hands makes things so easy. The currents and winds and vagaries of other boats can require a little extra response. 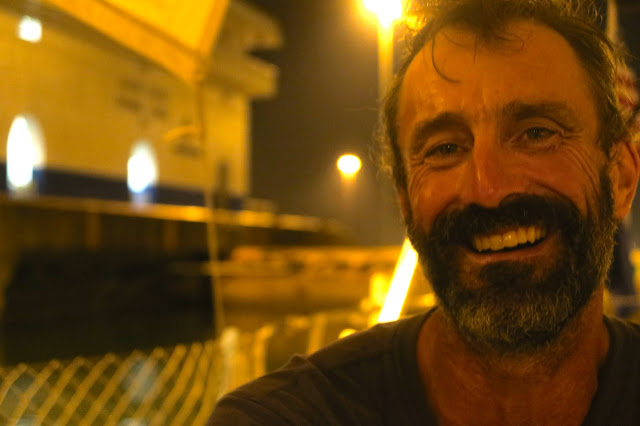 I asked our line handlers about their previous experiences in the Canal while we were still in the Flats Anchorage in Colon, waiting for our advisor.

They immediately brought up this one advisor they had seen in action, name of ____ , who they said had nearly sunk a boat. Or something like that. I didn't get the details.

As we approached the first locks we rafted up to the cat with whom we would be tied while locking up. The cat had much more powerful engines than ours, and so the advisor on the cat would be in charge of the movements of our two rafted vessels.

Sure enough, he (and the skipper of the cat) proceeded to angle Galactic towards the canal wall, fast, as they drove along, blithely talking about something much more important than what they were actually supposed to be doing.

I yelled at the advisor, and got barely a notice. Then Alisa and I yelled at him, much more loudly. Like, as loudly as two people whose uninsured home is being driven into a concrete wall in the night by a careless stranger.

The advisor was plainly annoyed. But he also corrected his course. 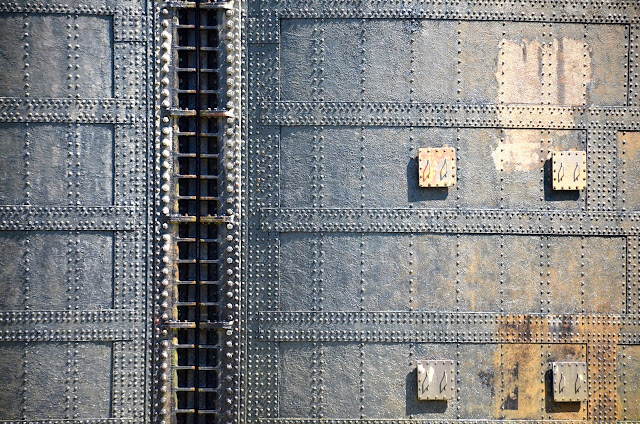 Our own advisor on that first day, Rick, was everything you could want. He was competent, he was charismatic and a lot of fun, and he was really happy to engage with us. He made the effort to learn the names of all seven of us on board.

That other advisor on the cat, though, took some management. It was not the time for me to be the shrinking sailboat owner, silently worrying about things. It was the time for me to channel whatever tiny little element of the super-assertive Alaskan captain that I might have buried somewhere very very deep within me.

And you know, I think there's a rough sort of art to publicly, quickly, and plenty loudly, telling someone to his face that he doesn't know his job and needs to learn it quick, while at the same time maintaining the ability to work with that person.

This is not the normal state of interpersonal interactions on our little family ark. But it all went fine. 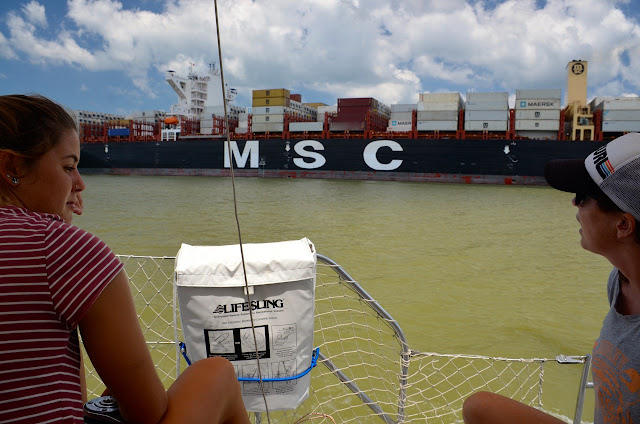 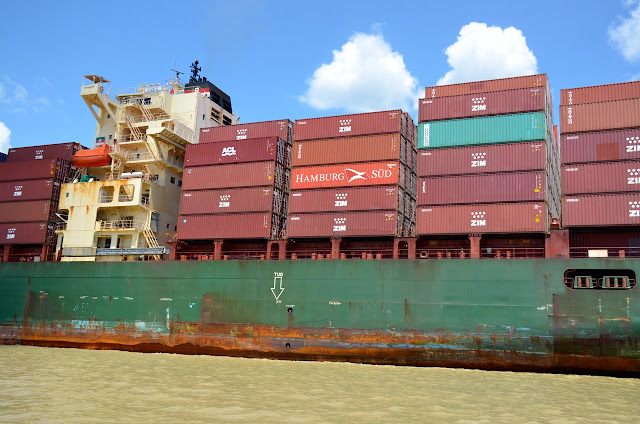 Our only other drama came when we were locking down at the end, through Miraflores Lock.

There tends to be current behind you in this lock, and it can be a tough place for an under-powered single screw vessel to hold her position while waiting for other boats to get tied in. The plan, therefore, would be for us to raft to the Torah, a powerful launch that was going through with us, and to let them maneuver us between the two levels of the final lock.

In retrospect, it was probably a sign when the advisor on the launch introduced himself and told me that I might have to be ready to supply a little reverse if needed.

After we had locked down through the first level of the locks, Torah untied from the wall and started motoring forward.

And instantly, the (American) captain of the Torah started steering like a drunk on rollerskates.

The poor guy only seemed to understand two speeds - full ahead and full astern. Time and again he wildly oversteered and found himself in danger of spinning right around inside the lock.

With us tied to him.

And time and again he gave it full throttle to get himself out of a jam. Moisés was constantly on the radio to Franklin, the advisor on the Torah, relaying instructions to me to help power the launch out of trouble.

I remember saying out loud at one point, "What is he doing?". But then I settled down into the situation of being shackled to an apparent crackhead with a thousand horsepower engine at his command and paid very close attention to Moisés' instructions as the way to get us through the experience.

Between the Torah's wild full power oscillations and our own puny 40-horsepower attempts to aid something like a straight course, the lines between the vessels repeatedly stretched out violin string-tight, and then went full slack.

I was so so happy when the line handlers finally had Torah tied into place.

Moisés, it turns out, is a foreman for the Canal authority launch operators (the advisors are all employed by the Canal authority in other capacities, and take advising gigs on their days off). This was a private launch, apparently serving the needs of agents, and had nothing to do with the Canal. And to his vast credit, Moisés spared not a breath to castigate the errant captain while the wild ride was going on, and merely worked hard and intently to get us through it.

Afterwards, though, he was scathing.

And then the cat came along us, and it turned out that their advisor on this second day was a trainer for Canal launch operators. He had watched the whole show, and he and Moisés had a long, disbelieving, can you believe that shit? kind of talk between themselves.

Email ThisBlogThis!Share to TwitterShare to FacebookShare to Pinterest
Labels: Panama