Panama, rather than being the between-the-oceans transit lounge that I was expecting, has turned out to be a fantastic destination on its own terms, regardless of our business with the Canal.

As for the people part of travel...I find that I am getting to be more and more like our friend Richard, on the indefatigable yacht Thélème, whom we met all these years ago. Richard, who has been sailing much longer than we have, once explained to me that he has reached the point where, if given the choice between two anchorages, one in front of a village and another off by itself, he inevitably finds himself gravitating towards the lonely anchorage.

And so it has become with me. As a case in point, I offer up the delightful Caribbean port of Portobelo.

The place is filthy with history. Sir Francis Drake was reportedly buried at sea just off the harbor, and the history only ramps up from there.

Portobelo today is a fairly quiet roadside town, come down quite a long ways from the years, centuries ago, when it was a terminus for the transshipment of the fruits of genocide.

The town is something of a backpacker destination, and has a very lively Carnival scene infused by the local Afro-Caribbean culture. There are two Spanish forts, long since abandoned, right in the town, and all sorts of little eateries for bored looking tourists.

And, from day one when we made our immigration formalities there, I would have happily not set foot in Portobelo the town ever again.

But the other side of the harbor, away from the town, was my very image of travel idyll.

Here it was possible to anchor just off of another derelict fort, this one a three-level affair with a large waterfront fort, a smaller one a hundred meters or so up the hill, and a third at the top of a short track through the jungle.

The area around the two lower forts has been cleared of trees, producing a wonderful forest-grassland ecotone that was a birder's dream. It was always possible at the end of a day of science work to nip over with a boy or two and spot a handful of new species.

And when there were other kids about for the junior Galactics to play with we would send the whole mob ashore to go nuts in the forts without the inconvenience of adults sticking up the works.

Just look at the top picture in this post - can you imagine a better setting for the 6 to 10 set to be left to their own devices? 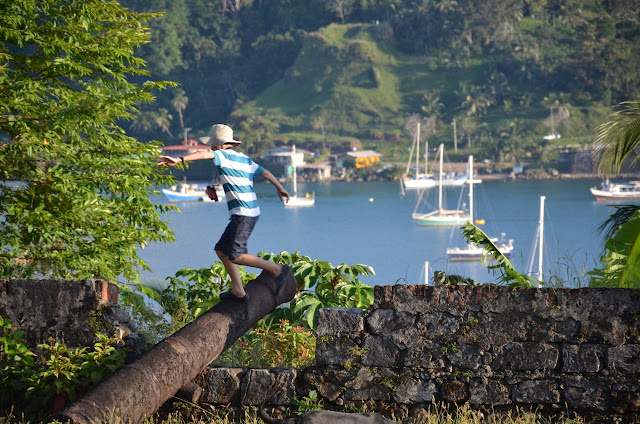 Our great friend Diana gently, and rightly, pointed out to me that my recent anti-rally screed sounded suspiciously like the ravings of a grumpy old fart.

(But, Diana, they're doing it right now! The "Puddle Jump" rally is having a meeting today in Panama City. When did anyone ever dream of going to sea so that they could attend meetings? And now they'll go to this meeting, and then they'll hurry through the Tuamotus so they can make it to the staged cultural event in Moorea, all the while ensuring that they travel half the world round without leaving the bubble of people very much like themselves.)

And so it is, perhaps, with the people side of travel.

I still love meeting people, and various yachties remain some of the most remarkable people I have ever met. And at times in the past we have gone to great lengths to achieve friendship across cultural and linguistic barriers, with extraordinarily wonderful results.

But our affairs with town life in a place like Panama can be fairly transactional, and the trouble of getting past my awful Spanish to make a meaningful connection with a local can seem like more trouble than it is worth.

In contrast, a place like that abandoned fort on the other side of the harbor from Portobelo, redolent with history, offering reasonable solitude, and the delight of learning a new place through its avifauna...put me in a place like for a couple of hours with my family, and I am completely content with life. 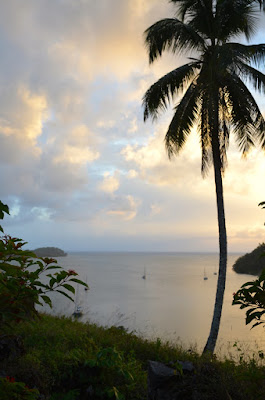