We were at a party last night in Kodiak, and someone asked me about the friends we'd made during our grand tour.

"Yep," I answered. "The way we look at it is, we got to know some of the most fantastic people that you could ever imagine. And most of them we'll likely never see again."

Elias and Eric had certainly picked up on the transitory nature of sailing friendships. As we were counting down our last year before returning to our home port, I once asked them what they were looking forward to about being ashore. "We can have friends!" was their immediate, and enthusiastic, answer.

Most of the time in the life afloat, you meet people, hit it off, and then sail away from each other, never again to cross paths. If you're on the same route, say sailing across the Pacific, you're likely to run into people over and over during the season. But then the season ends, and you inevitably go your separate ways.

A very few times, though, we've been lucky enough to run into simpatico yachties during more than one season.

A couple memorable examples are illustrated below. There was Six Pack, with Rex and Louise aboard, whom we met in Tonga, saw again a year later in Queensland, and then saw again a couple years after that in Tasmania.

And there was Thélème, the long-term floating home of wonder couple Richard and Michele, delightful holdovers from the good old days when sailing wasn't so darn serious, and sailors were a lot more fun. That's Thélème tied next to Galactic in Whangarei, New Zealand. 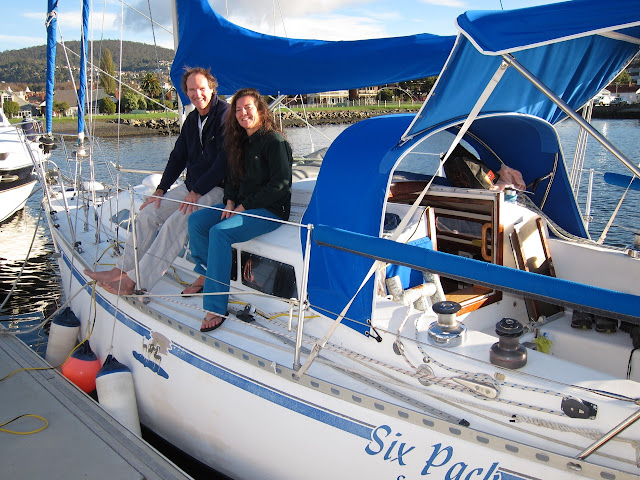 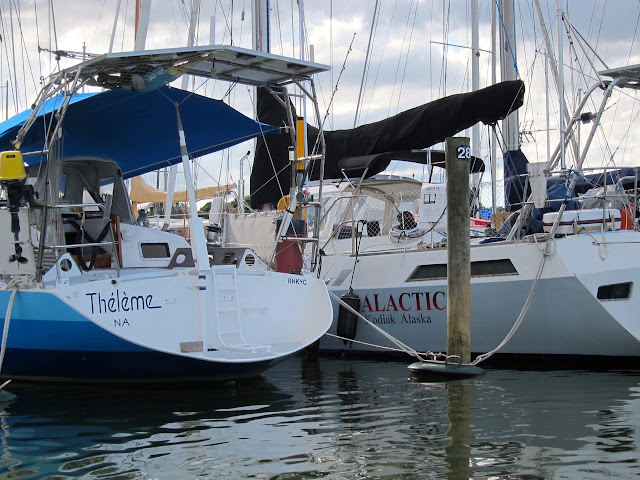 The very champion example of ships we meet more than once, though, is our friend Leiv on Peregrine. We met in Tasmania, saw him again in the Falklands, and just now had a great summer with him in Kodiak.

But these things of course come to an end. Leiv buggered off a few weeks ago, chasing rumors of cheap sandblasting in Mexico, and ultimately headed back home to the Falklands.

I've gotten very used to quick goodbyes. In fact, the practiced way that sailors make quick work of goodbyes is one of the many things find attractive about that wonderful tribe of hybrid dreamer-doers.

So it was Alisa who really marked the moment for us when Leiv dropped by Galactic to say farewell. When the hell would we ever see each other again, she wondered aloud.