Always Getting Ready is the title of a book about Yup’ik Eskimos on the Yukon-Kuskokwim Delta in southwest Alaska. A Yup’ik woman interviewed for the book talks about how people in her village are always getting ready for the next subsistence activity – hunting birds, or picking berries, or catching salmon, or shooting beluga whales. I’ve never read that book, but the title describes the endless work and round of seasons of traditional Alaskan economies so well that the phrase has stayed with me. And it is a phrase that also describes our new sailing life well.

After Aquatic Park we motored across San Francisco Bay to Alameda. We got great views of the City from the water, and traveled under the Bay Bridge, which is in the background below. 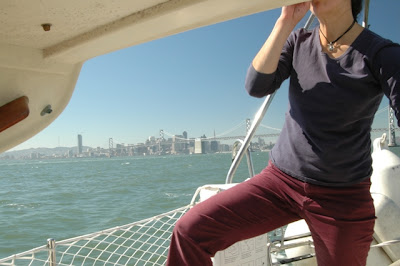 San Francisco Bay is incredibly small (the main part of it, anyway, barring the estuaries and rivers that branch off in different directions). It’s only a few miles from San Francisco to Oakland and Alameda. The entrance to the ditch separating those two cities hosts a big container-loading facility, seen below. As we drive borrowed cars around the East Bay those cranes make a great landmark, and Alisa and I are quietly treasuring the expectation of the day when we’ll motor past them on the way out of Alameda. 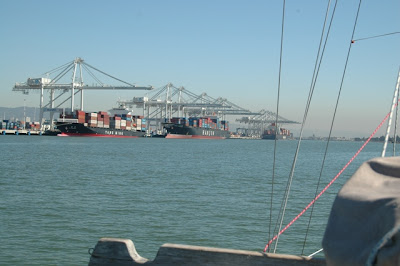 Many of the containers loaded by these cranes arrive or leave the port on trains, and one of the very best parts of Alameda for me is the sound of the train whistles blowing in the yards across the ditch in Oakland. We hear them at night when we’re lying in our bunk. Normally when you hear train whistles they’re doppler-shifted by the velocity of the train, and there’s only the one whistle, disappearing into the distance and sounding lonely. But the trains in Oakland aren’t moving fast, and there’s a lot of them, so their whistles sound conversational and friendly. I love it.

Can’t say I love much else about the East Bay. Our time here has made us both lonesome for Alaska, and a bit shocked at the life that so many people put up with in the Lower 48. The aesthetics of the landscape in Berkeley-Oakland-Alameda are just disastrous, and the filthy air and freeway-centered lifestyle are too grim for words. This is a place where people commune with nature by buying shampoo containing botanicals and algae extracts from upscale grocery stores that are so crowded that you literally get shopping cart traffic jams. The East Bay is, in a nutshell, a poxy shitehole. (I’ve just read Trainspotting.) No offence to the wonderful people who live here.

On a brighter note, we have reunited with Elie and Marie in Alameda, friends who we met when they spent the winter in Kodiak on their sailboat. Now they have a new boat, and a new crewmember, four year old Jules. They have been living in Alameda for those four years, saving up money and getting their boat ready to cruise for the next 20 years. Elie and Marie are very experienced sailors who have had fine adventures in remote places in the Pacific, and I find talking with them to be wonderfully reassuring and informative. As opposed to all the marina experts whom we’ve met in California, Elie and Marie have embraced cruising as their life, and they have a frugal and realistic take on cruising that really contrasts with the spend-another-grand-at-West-Marine approach that we more often encounter.

We spent a few days tied up at the docks of two yacht clubs in Alameda, where we met some very friendly people, and then we made the decision to haul out here, instead of waiting for San Diego or Ensenada. We were helped out by a timely housesit for my sister’s good friends Jen and Ben in Berkeley, so we could tear the boat apart without keeping it baby-proofed for Eli. And tear it apart we did, getting after both routine maintenance and some pesky problems that we didn’t want to deal with in Kodiak, where getting sailboat supplies is so hard. Here are pictures of me painting the sheer stripe, Alisa greasing winches, and the interior of the poor boat in mega-project mode. 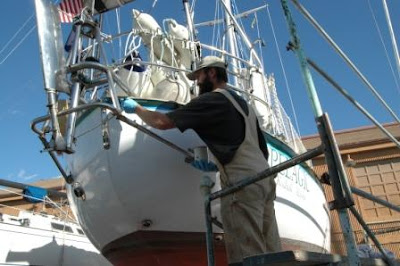 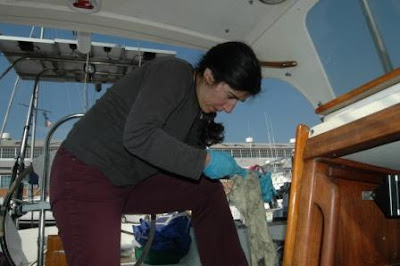 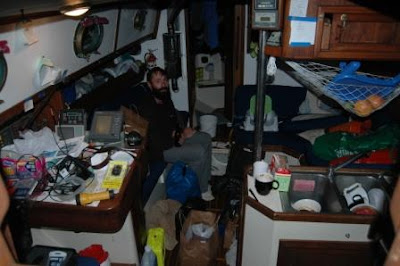 We were in the yard for twelve days, working hard every one of those days. What a joy to finally launch. We’ve got those twelve days of work behind us, but there are still plenty of jobs that we’d like to cross off the list before we leave the country. That’s where the “Always Getting Ready” part comes in. The topic of boat maintenance is the dread curse of writing about the sailing life. No one can make stories of fiberglassing rudders or replacing bilge pump hoses entertaining. But again and again people living on sailboats who fancy themselves writers decide to go on about these topics, falsely assuming that others will find their boat projects interesting. I have manfully resisted the temptation to write about maintaining the barky on this blog. But now, since we’ve just hauled out and are in the midst of an avalanche of in-the-water jobs, I will indulge myself briefly.

And so, in brief. We have put a crushing amount of work into Pelagic during the four years we’ve owned the boat. A truly overwhelming amount of work. This is a normal state of affairs for anyone going cruising on a budget. So while we’re lucky to be doing this trip, as lucky as anyone is who can chuck it all for a few years and savor a life lived at sailing speed, please don’t think that it’s just luck that has gotten us, or any other cruisers, to the point of casting off the lines and heading out for a year or three. There’s luck involved, and the ability to organize your life around a vision, but also more work than many of our contemporaries can imagine.

Things on boats are always breaking. That’s a normal state of affairs, and as boats have become more complex, the number of things that can break has increased. As we sailed down the west coast, Alisa and I kept a list of boat jobs that we’d like to get done before we leave the ready availability of parts in the U.S. and begin our trip across the Pacific. The list runs to 80 jobs. We’ve put all that work into Pelagic over the last four years, and we’re still not ready. We plan on another slug of boat work in San Francisco Bay, then another in San Diego, and another in Ensenada. Then, hopefully, we’ll have the boat at a level of readiness that will allow us to drop back to say, 20 hours of maintenance work a week as we sail down the Mexican coast and across the South Pacific.

We’re both pretty tired of being in Alameda, and we suspect that we’ll like San Diego, our one other chance at the services of a major city before we leave the U.S., even less.

We’re getting very excited for Mexico, and the delights of the South Pacific beyond, and realize that we are again reaching a point, just like the one we reached when leaving Kodiak, where we’ll have to work hard to get ready and then just leave, regardless of what jobs are or are not done.