Two hours after dawn, a ship. All night we have made a meal of the light northerly breeze, traveling south at four and even five knots as the sails flap themselves empty with the roll of each swell. Now we are just at the edge of profitable sailing, making two knots on the last puffs of this wind. Both sails are boomed or poled out and lashed fore and aft to hold them in place before the wind. Pelagic is spread-eagled in her least maneuverable point of sail while the ship draws closer. It is the color of a brick, and has all the solidity of ten million bricks in a place where everything else in fluid. Barely moving and barely maneuverable, we are in the way.

Alisa comes up to the cockpit, cross after standing watch half the night, and we jibe. After ten minutes the ship is closer and I realize we have jibed into its path. I jibe us again, towards the ship’s stern, and watch it slide past us, its massive bow wave clearly visible from a mile and a half away.

An hour later another ship comes along, then another. We realize that the ships are cutting the corner around Pt. Sur, which brings them in about 17 miles from land, close enough to cross our path. So we pull down the sails and motor in towards the coast to be free of them.

We close on the Big Sur coastline, brown hazy mountains coming strait out of the water, a place where few roads make it to the ocean. Four brown pelicans fly by us, perfectly imitating pterodactyls as they glide low over the water and occasionally flap their wings, one bird at a time. Last night was bitterly cold, too cold for bare feet, so cold that around midnight I retreated from the cockpit to the chart table below, and only came up every ten minutes for a look around. But now the sun is on the flat sea like beaten copper and I’m in shorts. Pt. Conception, still 150 miles south of us, is meant to be the division between the northern and southern California coasts, but with the pelicans and the strangely naked mountains behind the haze, it feels like we’re south now. 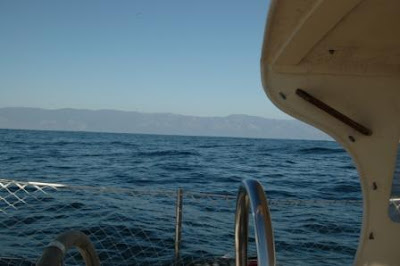 Alisa, meanwhile, has been rising to the occasion in the galley. At 1400 all hands gather for an onboard feast of yams, cranberry chutney, her famous mashed potatoes and Chilkat River sockeye salmon. We all have double helpings, including Elias, and Alisa and I inventory our causes for thankfulness, concentrating on the few and profound, rather than the many. 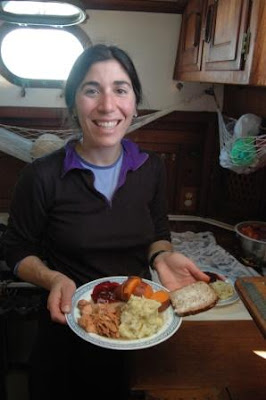