Well, more news from the accidental sailors on board Pelagic - yesterday we again set out to leave Mooloolaba.

Early in the morning we pulled the hook: 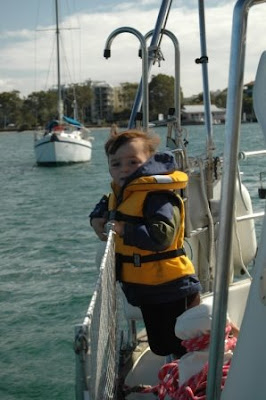 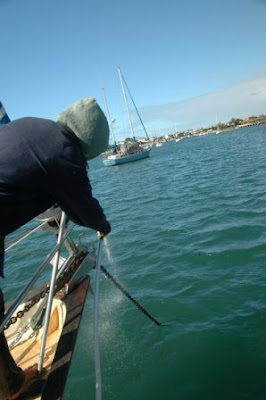 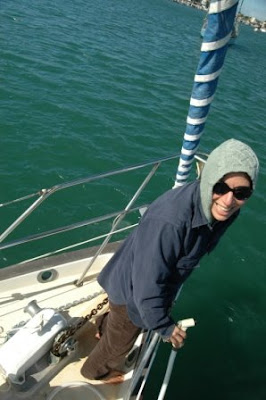 Alisa pulled the anchor and hosed the mud off the anchor chain. Note the winter clothes - time to get back to the tropics!
Spirits on board were high. The anchor up, we merrily headed downstream, towards the sea, happy to be leaving the Mooloolah River after our longer-than-expected stay. In a few minutes, though, a problem became apparent - this bridge, across the river, barring any further progress downstream:

"No problem," I said to Alisa. "I must have followed the wrong branch of the river." So I turned Pelagic around and took the next branch we found. Everything looked good, but then we came to another bridge, shown below. Looking at these pictures after the fact, I realized they encapsulate much of what I dislike about Mooloolaba. These are two different bridges, but the boats and houses are so cookie-cutter that at first they look like two pictures of the same scene.

Alisa looked at me quizzically.

"What's going on?" she asked.
"I don't know," I answered. "We're heading downstream, so we should be heading towards the river mouth. But I don't remember any of these bridges."
We tried another branch, but found another bridge, like the others far too low for us to pass under:

The last branch we tried was also blocked:

Shaken, we took refuge in the Mooloolaba Marina, since we had reached the ten-day limit for anchoring in the Mooloolah River. I think there was another reason that we went to the marina - it was bad enough getting lost at sea the last time that we tried to leave, and coming back to Mooloolaba when we thought we were going to Wide Bay Bar. But failing to even find the sea, even by the true-and-tested method of following the river downcurrent, really threw us for a loop. Suddenly our confidence is a little low, and I'm not sure that either of us feels secure at anchor and having to ride the dinghy back and forth from shore. Here's Pelagic in her new home, safe and sound, tied to something that's pretty much guaranteed not to move, and ideally situated so that we can walk on and off the boat: 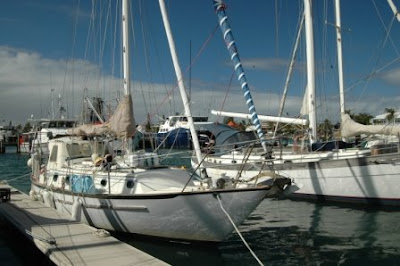 Later that night, after the little fellow went to sleep, Alisa and I took our solace in some serious gin and tonics. We read through the logbook entries for the day, reviewing the hourly records of position and conditions as we wended our way through the intricacies of the Mooloolah River system. Everything in the log books checked out - all of the GPS data of lat/long, SOG (Speed Over Ground), COG (Course Over Ground), VMG (I never figured out what that one meant) - it all read properly and error-free. Yet still, there was the insurmountable, inescapable fact of the day - we had failed to find our way to the ocean.
The bottle of tonic water was getting low when Alisa had the Eureka! moment.
"Give me the tide tables!" she said.
And, once she opened the tide book to the correct day, her face was filled with the the Cheshire Cat Grin of being the one to figure it.
"Mike," she said.
"Yes?"
"We followed the river downstream."
"Um. Yes?"
"Well that was the wrong way to go."
"How could it be wrong?"
"Easy. The tide was coming in this morning. So the current was flowing upriver, towards all those bridges."
"Oh, right. Eureka."
So, mystery solved, and our string of embarrassing posts now extends to two in a row. But we figure that, if nothing else, anyone who is out there with dreams of setting off to sail the world on their own boat might learn a cautionary tale from our own experience.
Meanwhile, we still have to leave Mooloolaba.
Posted by MikeAlisaEliasEric