Well, it's rare that I have something really embarrassing to share. But everyone makes mistakes, and it seems there's no point in sharing the highs of our life afloat if we don't also own up to the lows.

We finally left Mooloolaba two days ago, after being there much longer than we ever expected. It was a calm morning, wind almost nil, and Alisa and Elias relaxed on the foredeck as we motored north. It felt so good to be moving again. 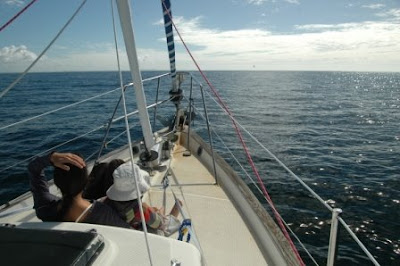 We passed the Glass House Mountains, named by James Cook in 1770. We got to talking about Cook's exploration of this coast. He sailed almost the entire east coast of Oz and narrowly escaped a disastrous end when he discovered the Great Barrier Reef the hard way. We marvelled at the incredible challenge he faced, navigating huge sections of the globe utterly blind, with no charts save those that his expeditions drew as they went.

And then I had an idea.


"We know there aren't any off lying hazards along this section of coast," I said to Alisa. "We're just going north until we reach Wide Bay Bar, which is the first entrance we come to. Why not try navigating by eyeball once, just to see what it's like? It will be our little taste of what sailors like Cook must have experienced. We won't ever have a section of coastline that's easier to navigate than this."


And so that's what we did - turned off the GPS, covered up the compass, put away the charts. We were already a couple miles off shore, with no other vessels in sight, so we even closed our eyes and let the autopilot-less Pelagic steer herself in circles for five minutes. We figured that way we'd begin our experiment on a blank navigational slate, without even a clear idea of which direction we were traveling. 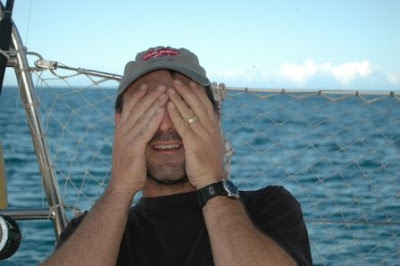 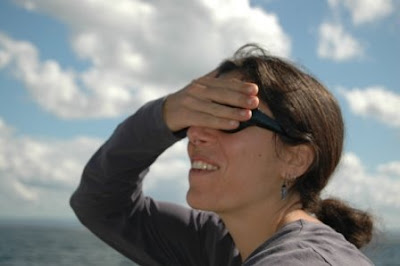 Closing our eyes at the start of the experiment. 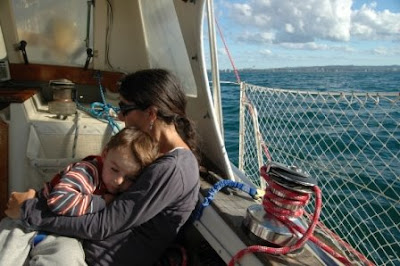 Things went smoothly enough. A light wind came up, and we were able to sail. The family fell into our comfortable routine of being underway. 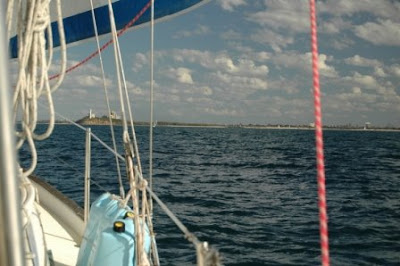 And then, a few hours later, we came upon a harbor entrance, just about when we expected to. 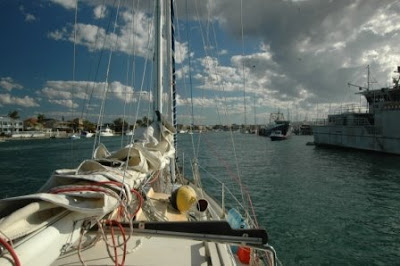 We dropped the sails and motored into the well-marked harbor. There's something that Cook never found in Australia - red and green markers to show the channel.
As we motored in, Alisa and I both started getting nervous. This harbor didn't look anything like what we remembered of Wide Bay Bar and the nearest town, Tin Can Bay. Those places were pretty sleepy, but the place where we found ourselves now was built up, with condos, a fleet of docked commercial fishing boats and a marina full of recreational boats. Something wasn't quite right...
And then it clicked - we were back in Mooloolaba!
When we opened our eyes and started following the coast at the start of the experiment, we had inadvertently begun following the coast south, back towards Mooloolaba, instead of north to Wide Bay Bar. What should have tipped us off was that the coast was on our starboard side (see the second-to-last photo), when it should have been on our port.
Kind of embarrassing, really, and to be honest we thought long and hard about whether we should share this experience on the blog or not. But we figured that we don't really have anything to prove, and anyone can make a mistake, so there's really nothing to be ashamed about.
After successfully finding our way across the Pacific, accurately making landfall after landfall, we finally goofed one up.
At least we renewed our respect for the achievements of Captain Cook...
But now we have to leave Mooloolaba again.
Posted by MikeAlisaEliasEric