If we had a totemic bird on Pelagic, it would have to be either the short-tailed or sooty shearwater. These two bird species nest at high latitudes in the southern hemisphere, in places like Tasmania and New Zealand, and they venture as far south as Antarctica to gather food for their chicks. And then when the breeding season is over they fly all the way to the Bering Sea for the northern summer.

Any bird that migrates between Alaska and Australia has got to be close to our hearts!

I was walking on the Iluka main beach the other day and discovered a tiny "wreck" of short-tailed shearwaters. There were eight carcasses on the beach, all but one of them very fresh and left by the last high tide. There was another bird on the beach still alive, awaiting its fate. (These are very pelagic birds that normally come to land only to breed, so one that is just sitting on the beach has clearly just about had it.)

And, most touching of all, there were two swimming in the surf - paddling away from land, but slowly, inevitably being washed into the beach by the waves.

"Wrecks" are a big part of seabird ecology. Very numerous birds like short-tailed / sooty shearwaters (I have seen them described as the most numerous bird in Alaska, or even the most numerous wild bird in the world) require large concentrations of food, especially when they are spent by the demands of an Alaska-Australia migration. It's common for these highly aggregated bird species to die en masse when foraging conditions are bad. So I assume the birds I saw had made it all the way to Australia on their pre-breeding migration, and then starved.

I brought a carcass back to the boat to ID it: 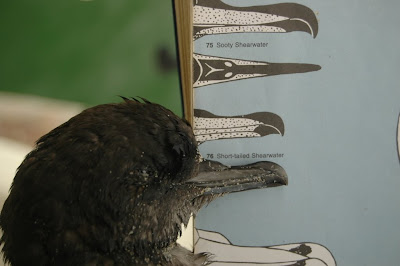 Separating the two species at sea is notoriously difficult, but the bill of this bird perfectly matched the short-tailed shearwater bill in our field guide.

Seabird geeks out there will notice how light the underwing of this bird was. If I'm not mistaken (?), it's the sooties that tend to have lighter underwings. 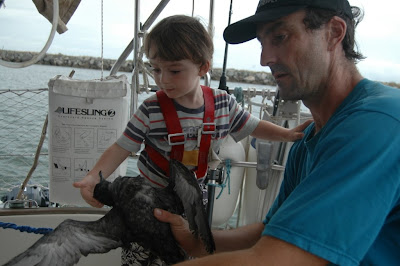 This all ended a bit freakishly. After we were done with the carcass, we chucked it into the harbor. Twenty minutes later, we got int the dinghy to go meet some friends at the pub for dinner. And what do we see right off the stern of the boat?
A short-tailed shearwater, swimming straight at us.

Seeing a short-tailed in a place like the Iluka harbor, on the Clarence River, is so unusual that we couldn't shake the feeling that it was the bird we had been handling in the cockpit, come mysteriously back to life. We had to drive around the harbor until we found the dead bird before we were sure that the second bird was a different (and also obviously very distressed) individual.
The next day I walked the beach and saw only one fresh carcass. And there was a feeding flock of gulls and terns in the surf, with some short-tailed shearwaters joining in.
So it looked like the travellers were getting a much-needed feed.
Posted by MikeAlisaEliasEric