Alisa, at this very moment, is out in the cockpit, greasing and assembling a winch after its annual strip and clean: 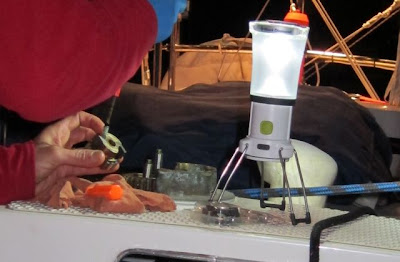 Sailing dudes of the world, continue to eat your hearts out.

Now, if only she could stop breaking the $70 plastic winch parts that just arrived in the mail (that jagged section in the back was smooth until a little too much torque was applied): 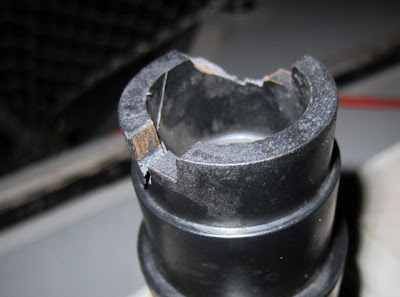 On another domestic front, we just got rid of all the carpet in the saloon.  The ultimate cause was spring, of course, but the proximate cause in this case was the pizza that Eric threw all over the saloon while Alisa and I were occupied with the four-handed job of replacing the windlass switch all the way forward. 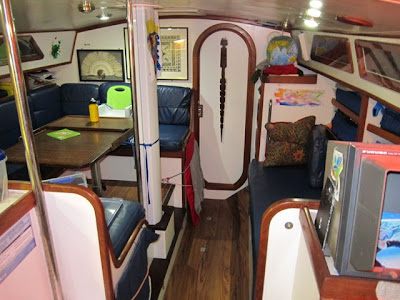 I'm going to miss this phase where we greet every big kid mess by just chucking another section of carpet into the dumpster.

So, a lotta little domestic moments like this for us lately.  But, fear not, much bigger things are on the horizon for team Galactic.  The Royal Hobart Show is tomorrow, and Elias has a four-day weekend as a result.

(Before I continue, let me take a moment to wonder why oh why Australians use the adjective "royal" when they want to make the point that something is particularly wonderful.  All the monarchial carryings-on here really get tiring.  The only upside to this nation's anachronistic fetish for all things Queen is that it allows me to simultaneously be a liberal in America and a republican in Australia.)

But, anyway, back to the sailing blog.

We've got a four-day break from school.  Both kids have diarrhea.  The forecast is for bucketing rain and 20-30 knot southwesterlies as a couple of lows pass over the state.

Given that set of conditions, what else could you possibly want to do besides go sailing?  That's very much our plan, assuming that it isn't too breezy to get out of the marina.

But, alas, deus ex machina: the engine isn't doing its thing.  We've had the injection pump rebuilt and, after it was replaced, first off the engine wouldn't fire at all.  That one took the mechanic two hours to figure out.  Now we start, but get no revs.  No bets how long that one will take to set right.  No complaints at all about the mechanic in this case, just a note about how weird things happen when even a professional dabbles in the black art of boat repair.

So, we're here at least until someone figures out the donk, and until Alisa can get new winch parts to replace the other new parts that she just broke.  And that means we'll have plenty of time here at the dock to observe Eric's latest not-so-cute behavior. 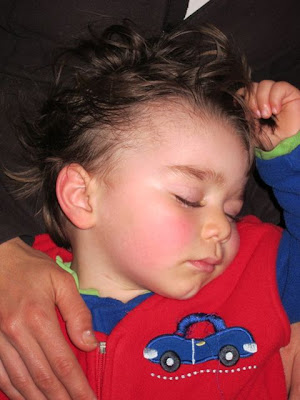 The little guy has been saying the oddest things during the night-time lately.

Things like: mommy, don't throw me in the water!

He gets going on that theme and won't be talked out of it.  Over and over he insists either that we're throwing him in the water, or that we're letting him fall in.

Yes you are, he says.  You are throwing me water.

We think/hope it just has something to do with the sickness that he's been fighting.  But for someone like me, who has always been very open in my view that superstition is a profoundly important part of going to sea, hearing the little fellow say such perfectly unlucky things, again and again, is just a bit unsettling...
Posted by Mike