[Don't tell Alisa about this post.  She still doesn't know that we have a blog.] 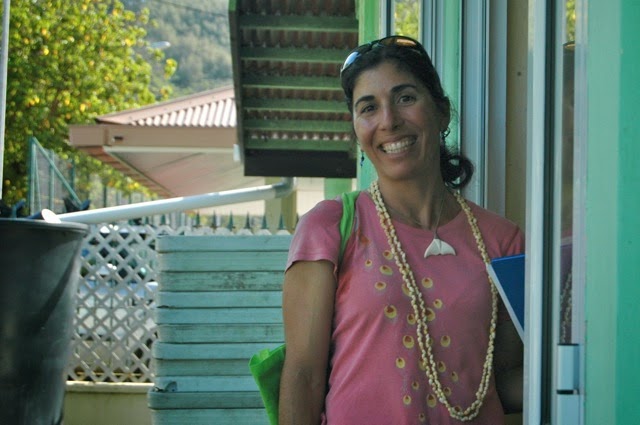 Let me tell you, friends…it's not always the easiest thing to be hanging in foreign parts.

Once you get far out of America, you're likely to find that folks start talking funny…eating funny things…and making funny faces when you try to explain the simplest concepts.

It takes moral fortitude to keep putting yourself forward amidst all these strangers who can't even tell you where the bathroom is.

(Which may explain one of the enduring mysteries of the life afloat - what's the allure of "cruising rallies", anyway?  Is it that they let you sail around the world while limiting your interaction with foreigners?)

Lately, I'm in to the whole travel experience, but only when I'm into it, if you get me.  Like, not all the time.  I've got this science career that I'm keeping on simmer and it appears that I'm only going to get book #2 off my mind by writing the darn thing.  All of which can leave me a little short on the energy that is required for extended conversations with people to whom I can only say, "hello", "what is your name?" and "how many Frenchmen does it take to defend Paris?"

Luckily, into the breach strides Alisa. She has been rampaging into the uncertain territory of Alaskan-Raivavaean communication lately.

That guy who lives in the house with the tiki in the backyard, was playing some boomin' Tahiti-dub when we stopped to commit tourism one afternoon, and sports a 'fro reminiscent of early-days Cypress Hill?  She tracked him down outside the mairie yesterday and, with the help of our French-English dictionary, arranged a Galactic to tiki dude music swap.  He got the Skatalites, The Internet, Burning Spear and Ethiopiques from us.  Lord knows what we'll get from him. 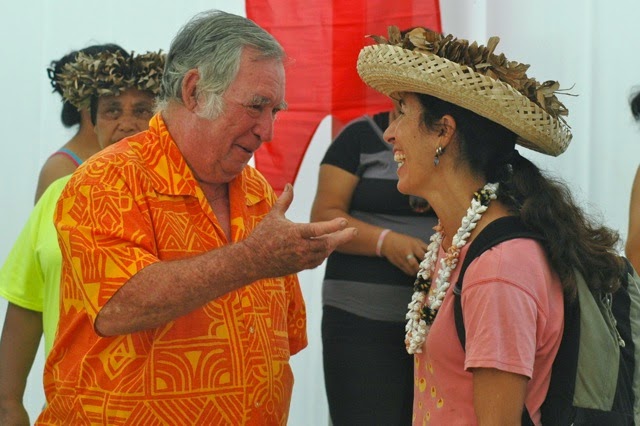 The magasin owner who spent a year in Birmingham, England - the one who gave Elias a ukulele lesson that devolved into a ukulele lesson for me when our boy was too tired?  Alisa arranged all that.

Alisa is the one who has given us the contacts to learn which of the four villages on the island supports the tradition dog-eating, to learn the derivation of "Raivavae", and what maitai means when you're not ordering a drink in Oahu.

Alisa is the one who knows people's parents' names.  She's the one who has met with the mayor two or
three times, learned that he is the one who controls the budget for the school canteen that has been feeding our boys for these two weeks, and got his OK for our boys to continue attending school, and eating there, while we're waiting for the right wind to blow us to Rapa.

I, quite frankly, have been riding her coattails while here.

And I suppose that's how has to work, partnership-wise, when you find yourself sailing circles around the Pacific Ocean for years.

Both of us can't be on the top of our game all the time.  If our enthusiasms can wax and wane out of phase, we can even each other out.  We can take turns showing each other the magic.

When we get to Chile, and I am back to traveling in a language in which I am at least sub-conversational, perhaps it will be my turn. 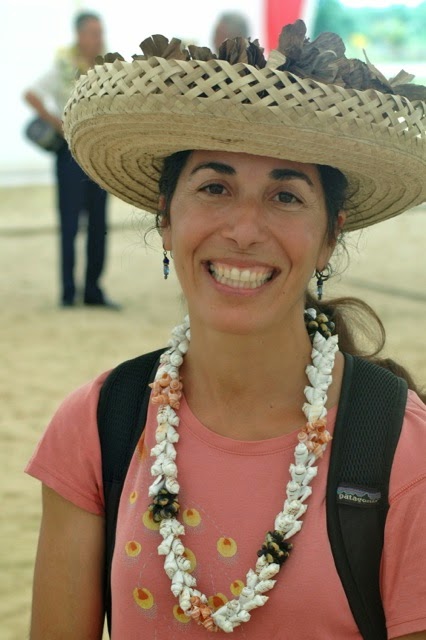 Oh, and - when we returned to the boat yesterday after the celebration welcoming the new gendarme to
the island (Alisa found out about it for us), we found that the anchorage had gone rolly, so that open doors were snatching back and forth at their latches, and round stuff was liable to roll around on counter.  Alisa says, "I like it better this way.  Reminds you that you're living on a boat."

Sailing dudes of the world, eat your hearts out.

You could sail the world without my wife.
But I wouldn't recommend it.
Posted by Mike