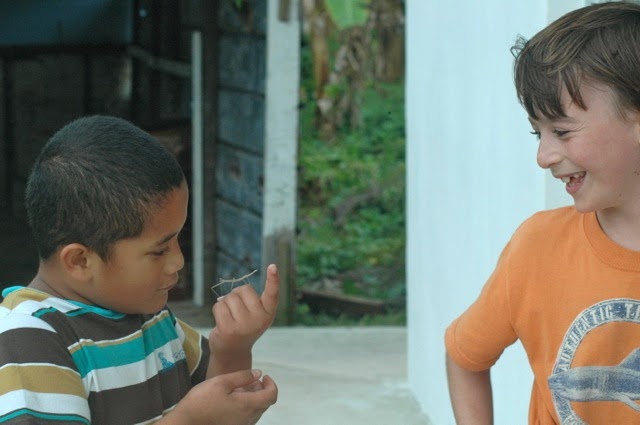 On one of the first Saturdays of our stay in Ra'ivavae, Elias and I went on a bike ride and stumbled on ruruoa in the village of Anatonu.

For want of a wiki-definition, I might define rururoa as "the Polynesian festival of volleyball".  For three months the Protestant churches in the four villages on Ra'ivavae hold a weekly volleyball/petanque/basketball competition-with-Polynesian feast.  The location rotates among the villages, teams from each village wear different color jerseys, and the volleyball is both good-natured and competitive.  It lasts all day Saturday, tons of families are there, and the music is loud.

Good fun for a traveling family, you might think.

Well, that first Saturday, Elias wanted nothing to do with it.

We were riding our bikes along the road, then suddenly we were in the middle of a crowd, with lots of kids staring at us - mostly staring at him.  Elias didn't share a language with them, and it made him nervous to suddenly be the object of so much attention.  He couldn't get away fast enough.

Every kid on the island of Ra'ivavae - and I mean every kid - knows his name.  We hear cries of "El-eee-uss!" everywhere we go.  And to Elias, that sound is a call to play.  He might not know
the other kids' names, and he still doesn't share a language with them.  But he knows enough French to play tag and to thumb wrestle.  We can go hours without knowing exactly where Elias is - he's just somewhere in Rairua, the village we're anchored at, having a play.

The change, of course, is due to the three weeks that he and Eric went to school.  (Whenever a three- or four-year-old on the island sees me, I'm liable to hear, "C'est le papa d'Ereek!")

We weren't sure how it would go when we first put the boys into school, but we've been very impressed by their willingness to throw themselves into a situation where they can't speak to anyone, aren't sure of most peoples' names, and generally have no idea what's going on.  There are kids to play with - it must be said, some of the friendliest kids we've seen anywhere - and that's good enough for our boys.

Both of our boys have been traveling for most of their lives, but I think these three weeks, when they've gone off without us into such a foreign setting, and have apparently thrived, have been their first real independent travel experience.  For Eric, they've been the first independent experience of any kind

They weren't in school long enough to get anything "concrete" out of it, like learning French.

But of course that's beside the point.

And, I should add that we owe an immense debt of gratitude to the people of Ra'ivavae for welcoming our kids into the school so graciously.  Among other things, providing food for the kids is a communal effort - the commune pays for the lunches, but my understanding is that parents bring in food for the kids' very substantial snacks.  So the four villages have been feeding our kids for these three weeks, in a sense, and we are very aware of that kindness, although no one here would ever draw our attention to it.

Alisa has been baking banana cake at a semi-industrial scale as we try to at least make a gesture towards reciprocating. 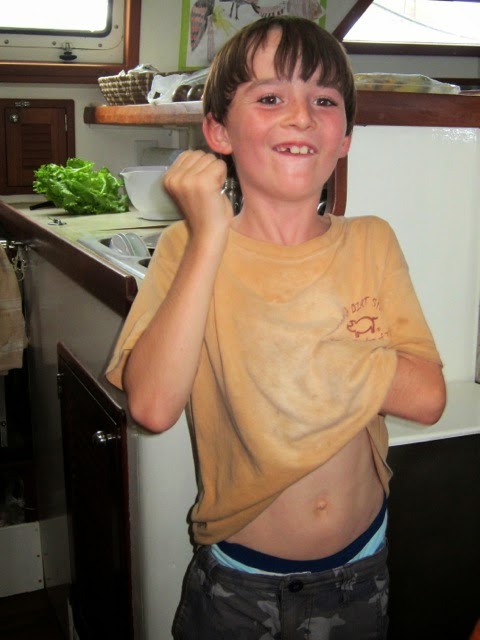 I'll end by referencing the picture on the right.

Elias might not have been in school long enough to learn French.

But what did he learn in school in Polynesia?

How to make armpit farts!

How could you not love that...