It's only really travel if you're on a roller coaster.  There have to be the heady highs and, inevitably, the Stygian lows that keep them company.  I first learned that when I was traveling by bus through Ethiopia with my bestest mate, Linus, all these many years ago.

Having the Little Dipper taken off us was a low.  We're pretty good about not being attached to possessions, and there was only a little of the inevitable self-blame.  (Why did we stop hanging the dinghies every night?)  But mostly, we (I) feel for the blow to the ship's operations.  You might call it a luxury to have two dinngers (we still have Smooches, our éminence grise of an Achilles).  But aside from the convenience of being a two-car family and having a boat that was great for Elias to operate on his own, we quite like the redundancy of a second tender for the waters where we plan to operate over the next year or so.  The Little Dipper had beed our planned go-to for rowing lines ashore in the caletas of Patagonia.

Ah, well.  We did have a bit of a compensatory up when we first went ashore to look for any signs of the missing boat and stumbled upon an extended family from Santiago, about to enjoy a mid-afternoon repast of lamb roasted over an open fire.  They immediately welcomed us into their gathering, pressing beer and wine on us and insisting we should stay to eat with them.  Quite remarkably hospitable people, whose easy friendship we weren't quite in the mood to enjoy.

Despite whatever lows come your way, it is vitally important on a traveling boat to develop the capacity to just keep going, metaphorically and actually.  When we bought Pelagic, I remember the sellers, Q and Tatty, telling us that even when things just seemed too hard, we should keep going.

They were talking about the work of keeping a traveling boat in good nick, but the same thing applies to this sort of situation.  So the day after we lost the Little Dipper, we picked up the hook and headed down to the fishing town of Quellon. 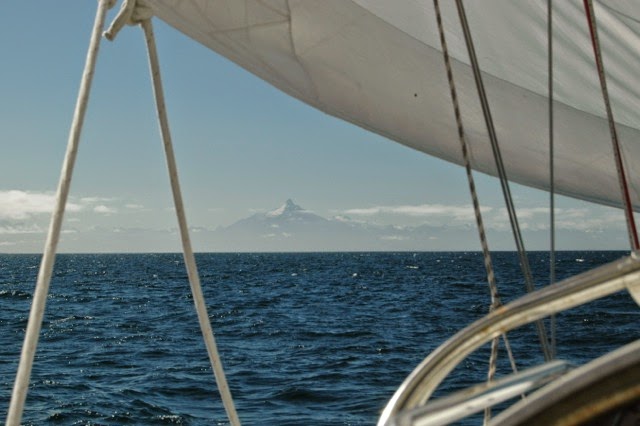 We had a bit of a bash to windward to get there - two reefs in the main and all that.  But after we'd tacked back towards Chiloé and the wind-against-tide action had mellowed out a bit, Eric recovered his wits enough to point behind us and say, "Look, that volcano is erupting."
And, he was right.  One of the peaks on the horizon was having a grumpy.

Eric was so pleased that he had been the one to spot it.  And for me, it was this powerful moment of realization, a moment that brought home to me how far we've traveled over the last year or so, and what a remarkable place we've reached.  A place where your four-year-old can look over the stern of the family home and spot an erupting volcano in the Andes.