We just bought a used car, sight unseen, from Anchorage. That's what people do in Kodiak.

As a part of our due diligence, I had an independent mechanic take a look at the car.

And how's that for a difference from the sailing world. As I've reported before on this blog, when we bought Galactic we installed a new GPS in the cockpit and left the meter running. As of just now, we have about 51,600 sea miles on the clock.

That feels like a lot. On a traveling sailboat, fifty-odd thousand miles will carry you through several lifetimes worth of memories. And for all the questions we get in port, from general landlubber and dock queen alike, about any "really bad storms" that we might have encountered at sea, our experience is that fifty thousand miles of sailing will bring you moments transcendent and terrible in a ratio of about 100:1.

I'm sure that I'm not embellishing my memories here.

News flash: fifty thousand plus miles is nothing for a car, even though it's well more than twice the circumference of the earth. And you don't look for too many moments of transcendence along the way.

There's just one more difference that I'll note. Sailors tend to count miles as they apply to people, rather than to boats. When someone wants to demonstrate how totally salty they are, they drop numbers like "a hundred thousand sea miles". I've often thought that these self-reported numbers tend to be bollocks and as dependable as sailors' reports of wind speed ("it was blowing sixty!"). But it's another interesting difference between the lives of sea and dirt. Hard to imagine someone bragging that they've driven a half million miles. 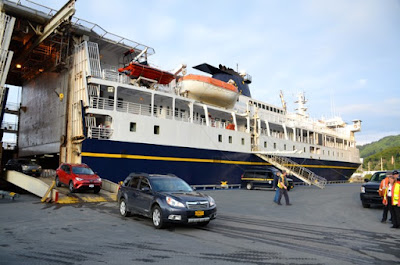