Elyse Johnston, Stephanie Love and Jay Johnston were the last Kodiakers we saw as we were departing on our grand trip across the Pacific. Their motor boat, the Toni, accompanied Pelagic on the five mile passage to Long Island, our very first anchorage of the entire trip. We spent the night anchored next to each other, then had breakfast together the next day. When they headed back to town they took our garbage for us and gave us a half bottle of good gin and a melon. This established a benchmark of success for trading with the locals that we were never able to beat.

And so it was a fitting bit of symmetry that Elyse, Stephanie and Jay were also the first Kodiakers to visit us in the Antipodes. (If you are temporarily living in either Australia or New Zealand and doing a bit of writing, you cheat yourself if you don't use the word "Antipodes" as often as possible.)

Their visit to Iluka was much anticipated on board Pelagic. When the big day arrived, though, there was one problem. They brought awful Kodiak weather with them. Really. Check out this picture of Jay, Alisa and Little Salty on the beach at Woody Head: 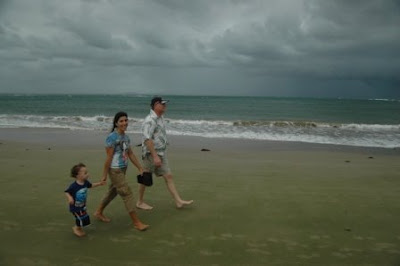 A few minutes after that picture was taken, our beach barbecue ended with Jay and me snatching a platefull of lukewarm snags ("sausages" in the non-Antipodean English-speaking world) and making a dash for the cars through torrential rain. We ate the snags back at their holiday rental, where we had the leisure to reflect that a snag really is better when you eat it outside. It turned out that we spent most of the visit in their holiday rental. A couple times we thought of getting them out to Pelagic, and got as far as planning a dinner aboard with them once. But then we would ride out to the boat in our little dinghy and get soaked in salt water and decide that we didn't want to put them through that discomfort. We don't mind getting wet in our very wet little dinghy, nor do we mind making the leap from tossing dinghy to the decks of Pelagic, but for some reason we hesitate to include friends in that part of our daily lives, even if they're hardy Alaskans like these three. The weather got so bad that Alisa dug out Elias' raingear bibs, which I forgot he even owned: 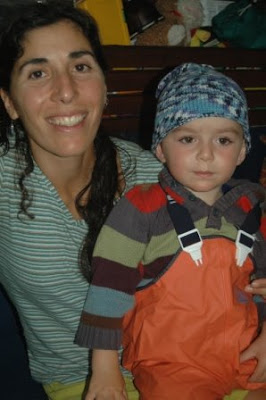 From the look on his face it appears that Little Salty is not looking forward to the time when he will be asked to resume his Idyllic Alaskan Childhood.


Today the weather finally moderated and we had Jay, Stephanie and Elyse out to the boat for cards and lunch before they headed north for their flight out of Brisbane: 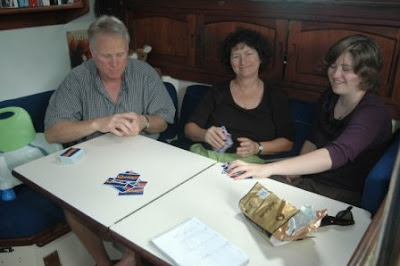 Our visitors brought letters from other Kodiak friends, and we engaged them in hours of conversation about Kodiak. They insist that things are pretty much the same there, but we suspect that we'll be surprised at the accumulation of little bits of change that people living there have absorbed and forgotten.

When we left the Rock, we wondered if we would ever come back to stay. I am now inclined to think we will, although I recognize all the uncertainty filling the years between now and then. The idea that I would like to return (and I think Alisa would, too) makes it so important to us to keep our Kodiak friendships as living things. This visit sure helped. And it got us ready for our visit to the Rock in June. Stephanie is already planning a party.

When we finished our cards and our lunch I shuttled our visitors to the beach in the dinghy. Alisa got a little choked up, as you might expect she would. But aside from the obvious distress over saying goodbye to friends, I think she was also realizing how much friendship we have given up to do this trip, how much she misses out on by not living within the embrace of a stable circle of mujeres simpáticas. She was crying when she remembered how important that is, and how much she misses it.

And (I think), she was recognizing that what we have going right now makes doing without that allright.