This is a shot of Townsville, where we just spent a month. Townsville is the place where I was born, and so I completed quite a grand circle when I came sailing back here, forty one years later, with my wife and son. I don't have any family in Townsville, my parents just happened to be here in 1968 because my dad was teaching at the new Uni. So it was an abstract sort of homecoming - no family to visit, nothing really to tie me to the place. We did catch up with some sailing friends, though, and we met some great people during our stay. 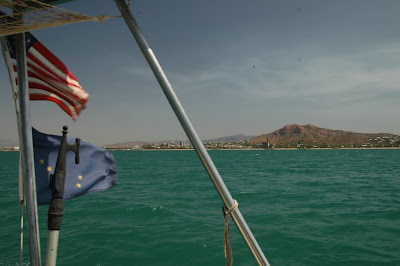 The idea was for me to spend a month of concentrated time writing in Townsville before we started sailing south for the summer. I wrote every day for the first two weeks, though typically only during the morning, with the afternoons given over to boat work. By the final two weeks boat jobs had taken over completely, and the writing was set aside. Sigh.

It was instructive talking to our friends Ashley and Brenda, who have sailed the world on the same boat since 1973 - when Alisa was one year old! They spent the bulk of the winter in Townsville, and plan to sail south for the winter a few weeks behind us. As they reached the one-month point on their pre-departure countdown, Ashley could occasionally be heard fretting about the amount of work they still had to finish before they left. In other words, even if you spend a lifetime sailing, you'll always be pushing up against the amount of work that it takes to keep an ocean-going boat seaworthy.

It's nothing but work that gets us from one place to another. Lots and lots of work!

Here's me checking the specific gravity of the house batteries while I'm equalizing them with a controlled overcharge. Love that bubbling suplhuric acid - my expression says it all! 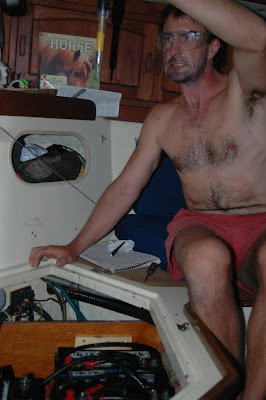 When we tired of the "rat race" of Townsville, we retired to nearby Magnetic Island, where we chucked out the anchor in some very beautiful bays. Maggie has the great Australian public spaces that we now take for granted. Here Elias is helping me grill snags 'n aubergines on the beach in Horseshoe Bay for A's and my 8th (!) anniversary. 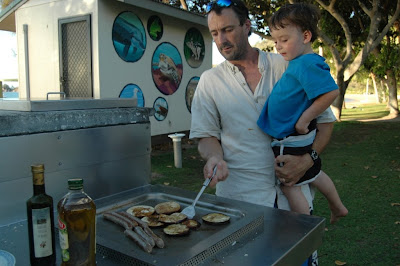 We've now been sailing south from Townsville for a week or so, and we very much like being on the move again. But we're not at all on a carefree wander along the Australian coast. We're dealing with lots of logisitics and plans and non-boat work and child rearing as we try to make this crazy lifestyle work, and there are deadlines of being in this town for a scheduled medical appointment and that town for a much-anticipated family visit and this far south so that we're poised for a weather window to get out to Lord Howe Island for Christmas and then down to Tasmania by January so that we're poised for our big April deadline. Coastal sailing is slow, and a bit of a grind, as we wake at 0500 and sail all day against light headwinds to make an anchorage at dusk and then wake early the next day to repeat it all.
But our days are also full of incredibly sweet family moments, and as I watch Elias growing up in this environment I realize that even though Alisa and I are often tired and sometimes grumpy with the demands that we've put on ourselves, we are also creating a world out of whole cloth for the little fellow, filling his head with a thousand memories that will be the foundation of who he is as a man. We're creating a dream-world that we'll never completely enjoy ourselves because of the heckling quotidian details that fill our time, but it's a dream world that is completely real for Elias, one that he will look back at in wonder long after we're gone, and realize he can never recapture. 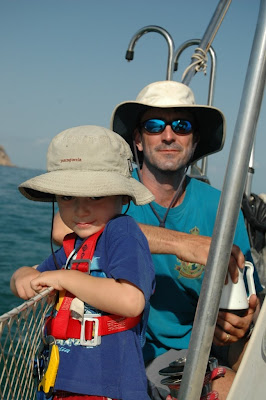