We gave up two days of beautiful northerly winds so that Alisa could get an ultrasound in Proserpine. Otherwise, the winds have been from the south. And we're heading south, with a deadline in hand: the early-November visit of my parents at Iluka, New South Wales.

We've been sailing into the wind to make sure we're there to meet them.

And we've taken a bit of a floggin'.

Day after day we get up at 0400 and sail all through the sunlit hours at a thirty degree angle, tacking back and forth into the wind, dodging spray in the cockpit and sopping up water on the cabin floor, and at the end of each day we find we have made 30 miles.

Sailing to windward is uncomfortable enough for the non-pregnant, but Alisa is approaching that part of her pregnancy where everything is uncomfortable. And Elias is, well, three, and doesn't necessarily understand why he has to sit next to us in the sloping cockpit for hour after hour, reading the same books and singing the same songs, and why he never gets to go ashore.

But, we've also been getting into the adventure of it all. We will be in Iluka on the appointed day to meet my parents! Suddenly, we're not aimless vagabonds - we have a mission! So we have pounded into the weather day after day, the only concession to pregnancy and early childhood being the compromise of putting the hook out each night instead of slamming into wind and waves around the clock. And when a brief spell of easterlies arrived, we jumped on it, sailing and motoring for 40-odd hours straight to get south while we could.

We figure that it's better to rush things now instead of in January, when we'll be trying to make it to Tasmania while Alisa tries to steer her six-months pregnant body around the boat.

Alisa has been great through it all. Her do-what-it-takes attitude about being on the water has come through strong. There really are very few sailing partners out there who would sail to windward day after day, while pregnant and caring for a three year old, with no complaints at all.

Cruising dudes of the world, continue to eat your hearts out.

And Elias has been the nearly perfect trouper as we arrive in anchorage after anchorage too late in the day to go to the beach. But he has started to express the desire to go stay in a marina for a few days.

We're getting a little worried.

Right now, we're on the home stretch - sitting inside Wide Bay Bar, only 211 strait-line miles from Iluka. The forecast is for southerlies for the next week or so. So there's clearly no sense in waiting for favorable weather to come along - we're just going to keep slogging into it. 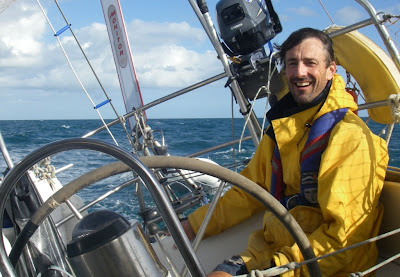 Life at an angle. 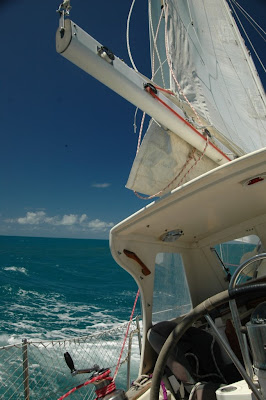 The main has been reefed day after day. 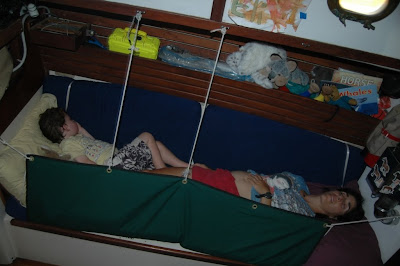 Alisa and Elias sacking out for a nap while the leecloth holds them in place. 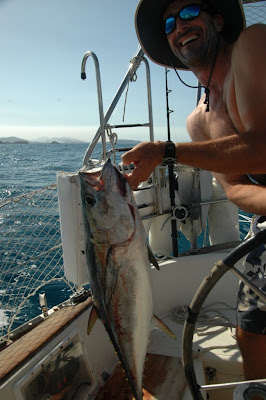 And we caught another tuna!
Posted by MikeAlisaEliasEric