In these years that we've been sailing we've met some really remarkable people who are also out sailing the world.  We form friendships that are intense, and also fleeting - we move on, and they move on, and at this point we have a set of wonderful friends who are somewhere on the other side of the world, where we'll likely never see them again.

But then there are our friends on Akimbo. 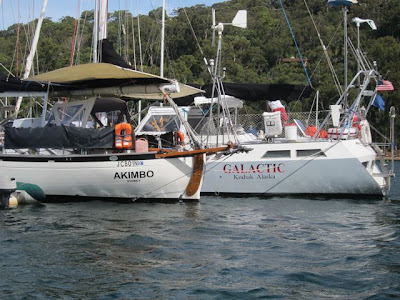 We first met Peter and Vanessa in the distant recesses of time - back in December of 2008, when we were so new to Australia that we hadn't even discovered Iluka yet.  They have been living on board Akimbo... well, roughly since dirt was young.  And they're based in Pittwater, just north of Sydney, so they're something of a stationary target.  They go out sailing for six months, or however long seems right, then come back to Pittwater to work and enjoy life there.  And of course this is our second stint of sailing the east coast of Oz, so just before we went back to the States we had the treat of rafting up with them on their mooring in Pittwater and having a good visit for a few days. 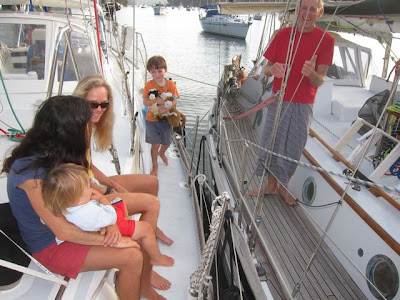 Akimbo is the only boat that we've ever rafted up with - both on this visit and our previous trip through, on Pelagic.  It's a great way to visit with kindred spirits - the other boat is literally a step away. 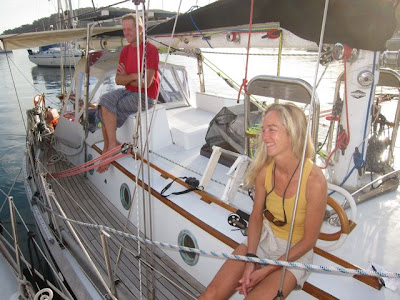 If I had to tell you just two things about these guys, they would be: 1) that they've got that particular twinkle in their eyes that you see in a few long-time sailors who are still having the time of their lives, decades into it; and 2) that Akimbo might be the best-kept cruising boat that we know.  Peter and 'Ness apparently just see the flaws and neglected tasks when they look at Akimbo, just like any sailors looking at their own boats.  But to our eyes their boat gleams, and everything seems to be functional and well thought-out.

So, it was a great catch-up.  But with Galactic heading off to New Zealand once our year in Australia is over, and the Akimbos hatching their own plans to sail far off in a different direction, it may be a while until we raft up again.
Posted by MikeAlisaEliasEric