My mom is here in Tasmania for a long-anticipated visit.
Things started off well enough. 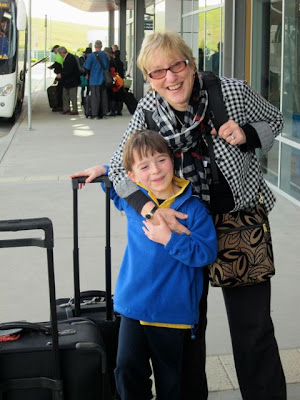 But then my poor mom spent a few days visiting with us on the boat, with Elias and Eric and me and Alisa all fighting the bug that we've been sharing around all winter long.

So my mom got sick.  After fighting it valiantly for a couple days, she spent today in bed in her B&B.

And then, things really went downhill.  I don't think it's purely an Australian usage, but I think that most Antipodeans would be comfortable referring to this afternoon as pear shaped.  As in, "then everything went pear shaped."

Elias' school called us at 11 to pick him up.  His four-month bug was flaring up again.  By one he was coughing a barking cough.  Things quickly went downhill from there, with labored breathing and cough-induced vomiting.

By 3:15 we were back at the Royal Hobart Hospital emergency department.  I said, "six year old, touble breathing", and we were magically whisked to the front of the line.

They got him past the crisis with adrenaline and prednisone.  And now we're settling in for 24 hours of observation. 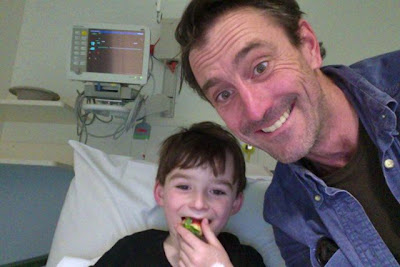 It still seems to be just a virus, and nothing more serious than that.

But I'll be glad when the poor little fellow is finally better.
Posted by Mike